“We will meet again, God bless you. 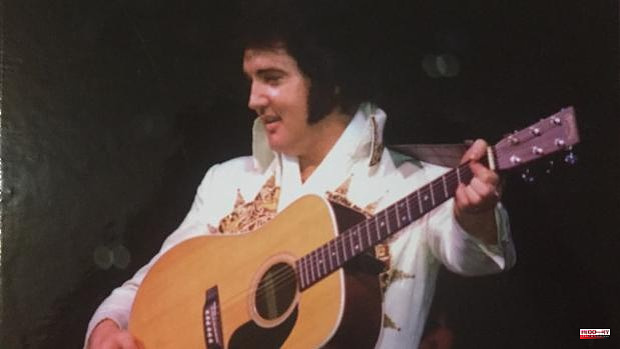 “We will meet again, God bless you. Goodbye », these were the last words that the King of rock pronounced on stage. It was June 26, 1977 at the Market Square Arena in Indianapolis before more than 18,000 people who sold out the tickets within a few hours of going on sale. They cost 15 dollars, and although they were scheduled for 8:30 p.m., it was not until 10 p.m. when they came out to the public. None of the attendees knew that that night would be the last time that Elvis Presley would play live, although his physical form was striking due to the depression with which he carried. He was dressed in white bell-bottoms, a gold-trimmed cape, and a white rhinestone shirt with flared sleeves.

He played 23 songs from a multitude of previous albums, including 'Jailhouse Rock', 'How Great Thou Art' or 'Hound dog' among others. The opening theme was 'See See Ride' after an introduction with 'Also Sprach Zarathustra' and with which he closed that historic date for music was 'Can't Help Falling In Love With You' along with 'Closing Vamp' after 80 recital minutes. The effects of alcohol, antidepressants and sleeping pills set the pace for a character in decline since he divorced Priscilla a few years ago. He was 42 years old and had a series of health problems with hypertension and heart disease. In addition, the death of his mother in 1958 was one of the traumas that he never got over and that increased in the last years of his life. Except when he sang, his attitude was that of a person under the influence of psychotropic drugs with unrelated phrases. There was a time when he had to read the words to 'Bridge Over Troubled Water' from a sheet of paper, and despite that he recited it beautifully. Although the critics cataloged it as a great concert, the truth is that many media echoed the state of weakness, the sad look on his face, and the overweight of the one who had been the great American star of the past two decades.

Although the 1970s were not Elvis's best sales period and many artists arrived stomping, the truth is that television continued to bet on him. The month of June 1977 was one of those moments in which 'The King' was able to record the third special television program of his life after 'Aloha from Hawaii' and 'The 68 'Comeback Special'. On this occasion, CBS recorded their concerts on the 19th in Omaha, Nebraska; and the one in Rapid City in South Dakota on June 21, 1977. A program that came to light in the month of October, posthumously, and where an image of the Indianapolis show was filmed where Elvis receives a record from Prayed. After this concert, Presley returned to his home in Memphis on the private plane 'Lisa Marie' to be able to rest and continue with his tour dates whose next stop would be Portland.

A few weeks later, the body of the great music star of the United States appeared lying in the bathroom of his 'Graceland' mansion. A heart attack was the cause of the artist's death on August 16, 1977. It has never been known whether it was a suicide, an overdose of pills or a natural death due to his state of health. Earlier that day he had been reading a book and singing Willie Nelson's 'Blue Eyes Crying In The Rain' at his house. In addition, it was common for him to take some sandwiches that have gone down in history as 'Elvis Sandwich' containing banana, peanut butter, three slices of bacon, honey and spread butter. They say that he ate up to seven of these every day, since eating was the only way he found satisfaction in recent years, and that once in Denver he paid a lot of money to get one. That noon that the King of rock and roll was found dead, he had a ticket from Portland on his nightstand, the next place where he was to give another recital, but history wanted the Indianapolis night to be the last live. A unique evening where Elvis did something unusual such as presenting his relatives to the public, something that many later interpreted as the artist was saying goodbye consciously. It has never been shown that he took his own life. By the way, the Market Square Arena was demolished in 2001, and a plaque was placed in its place where it says 'Elvis has left the building' to explain to future generations that the last show in his life was produced there. This phrase was the one that used to be pronounced at the end of all his concerts.

1 The Cadena 100 anniversary brings together the best... 2 Music to see, touch and smell 3 Madrid premieres bailaores with duende and title 4 Which countries will attend the NATO Summit? 5 The G-7 will draw up a strategy to alleviate the famine... 6 Erdogan's opportunism has Sweden and Finland... 7 Keys to understand how NATO works 8 The Kremlin believes that at the NATO summit in Madrid... 9 The NATO summit turns Madrid into the world capital... 10 NATO will try to anticipate threats, including from... The Cadena 100 anniversary brings together the best...