Prices are still out of control in Spain and the inflation rate is already in double digits, up to 10. 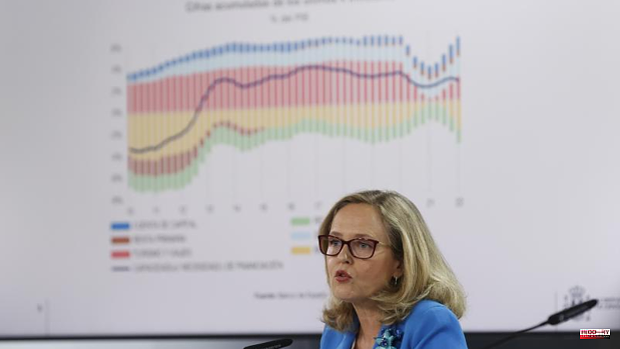 Prices are still out of control in Spain and the inflation rate is already in double digits, up to 10.2% in June, according to advanced data this Wednesday by the Government. All this despite the shock plan deployed and the Government's conviction that the maximum registered last March, when the warlike invasion of Ukraine began, had been left behind. But, the reality and the lack of control suffered by items such as fuel or the shopping basket have finally spoiled the Executive's forecasts and threaten to also disrupt the GDP growth projections. As reported by ABC, with the shock measures to curb inflation, electricity prices have been partially limited, but the seepage of these increases to other items and basic goods has not stopped, with the consequent decrease in purchasing power. for the consumer.

Thus, the inflation data known today dynamite the optimism of the Government and its economic projections for the coming months. Just a month and a half ago, the First Vice President of the Government and Minister of Economic Affairs and Digital Transformation, launched a message of hope during a conference with Catalan businessmen: "Everything indicates that we have already left behind in March the peak of the inflation and that in the second part of the year it will slow down to drop to around 2% next year”, he remarked. Calviño was referring to the slight respite that prices gave inflation in April, when the rate fell to 8.3% after touching 9.8% in March.

At the beginning of this month, Calviño insisted that the measures were working. The head of Economy defended the shock plan to lower gasoline prices or the first VAT reduction on electricity. The minister stressed their effectiveness and went so far as to say that without these measures, inflation would be between two and three percentage points above its current level, that is, between 10.5% and 11.5%. "Thanks to the forceful measures adopted in response to the war, inflation has been reduced between two and three percentage points in the course of this year," said Calviño.

Although the rise in inflation surprised again in May, the Executive did not cease in its optimism and from the Ministry of Economic Affairs it was noted that everything pointed to Spain having reached the peak of inflation in the month of March. "The response measures to the impact of the war deployed by the Government are clearly limiting the rise in prices," they argued at the end of last month from the portfolio led by Calviño.

Another unfulfilled prediction is made by the Vice President and Minister for Ecological Transition, Teresa Ribera, who at the beginning of June predicted a cut in the CPI thanks to the cap introduced on gas. Ribera calculated that the limit on the price of gas would reduce inflation by "eight tenths or one point." At that time, the minister pointed out that consumers would notice the application of the Iberian exception in the July electricity bill.

At the end of March, the President of the Government, Pedro Sánchez, was also convinced that he would be able to “bend” the inflation curve thanks to the measures put in place after the outbreak of the war in Ukraine. Already at that time, the head of the Executive fine-tuned the maximum and assured that 73% of the rise in prices was due to the "unbridled" cost of energy.

But, the speech of the Government and that of Calviño began to turn a few days ago in a context of rising prices and the difficulties in curbing the rise in costs at source suffered by companies and manufacturers. Calviño retracted his previous statements last week: "We have to work with a new scenario of higher inflation for longer at the international level," as he acknowledged at the conference organized by the APIE together with the Menéndez Pelayo University and BBVA.

After learning today that inflation is already in double digits and that the situation has gotten out of hand for the Executive, Calviño blamed the situation on an "international problem" that "has accelerated exponentially as a result of the war, which unfortunately has not we can stop”, he indicated in the control session of Congress. In the vice-president's opinion, the Government's plan has made it possible to "lower inflation by 3.5 points this year, and even in this complex context, all the organizations expect Spain to grow strongly." For his part, Sánchez admitted on Wednesday that the CPI data shows "the seriousness of the situation of the European and Spanish economy." In this context of spiraling inflation, Sánchez defended the "appropriateness" of the measures put in place by the Executive to try to alleviate the impact of prices on the pockets of the Spanish.

The truth is that neither the discount applied to fuels nor the cap on gas applied since mid-June have managed to stop the escalation of inflation above 10%. High fuel prices, which could skyrocket to three euros a liter this summer; as well as those of food and beverages have ended up disrupting the Government's plans.

Despite the moderation in the cost of energy in April, prices rose again in May to 8.7% and thus put an end to the hope that inflation was a circumstantial phenomenon. In June, far from receding, prices are out of control again and are already in double digits, an unprecedented situation in our country in the last 37 years, specifically, since April 1985.

Experts describe the advanced inflation data in Spain as "shocking". “We reached two digits, one and a half points more than the figure for the previous month and even above the 9% that it marked in March. The underlying inflation data, at 5.5%, shows us that there are also problems that are becoming more structural within price formation in Spain, second-round problems that have to do, fundamentally, with the wage cycle and price formation”, warns Pedro del Pozo, director of financial investments at Mutualidad de la Abogacía.

The rise in inflation already put consumption in check at the start of the year with the consequent negative impact on economic growth. The contraction in household spending could increase and, with it, the deterioration of GDP growth in Spain. "We believe that these skyrocketing prices will end up having an impact on consumption, although the summer season may postpone this effect. What is clear is that the last part of the year is going to bring a significant contraction from the point of view of consumption, ”says Javier Molina, spokesman in Spain for the multi-asset investment platform eToro.

1 The Venta del Moro forest fire no longer has a flame... 2 A "blind" shot keeps the wounded guard in... 3 Police rule out that the attack on a shopping center... 4 The summer effect dissipates: unemployment falls by... 5 The artificial intelligence that hunts the thief by... 6 The cosmetic industry applies a sustainability treatment 7 Montero intends to limit the mobility and promotion... 8 Companies do not throw in the towel with algae as... 9 The shared bike business picks up pace 10 The drought of agricultural engineers cracks the future... 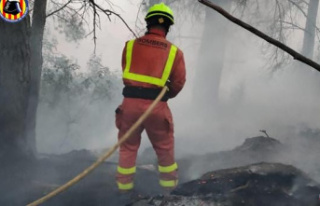 The Venta del Moro forest fire no longer has a flame...