The summer effect dissipates: unemployment falls by 42,409 people in June, 74% less than a year ago

The uncertainty that the price crisis is beginning to generate regarding the evolution of the economy has already been noted in the employment data for the start of summer. 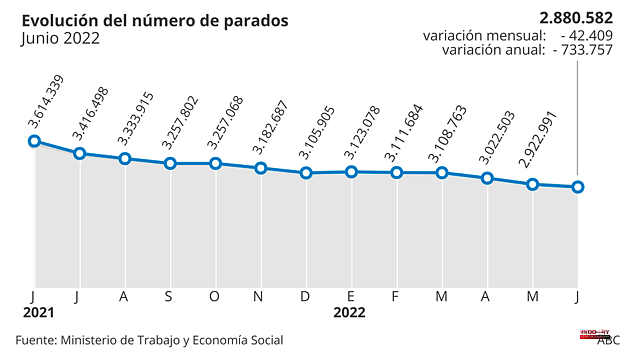 The uncertainty that the price crisis is beginning to generate regarding the evolution of the economy has already been noted in the employment data for the start of summer. Although the preparation for the summer season allowed the unemployment lists to be reduced by 42,409 people in June, the figure is 74% less than the reduction experienced in the same month a year ago, with a drop of 166,911 people. The same dynamic was experienced by job creation in June, with an increase of 77,000 Social Security affiliates -once seasonal effects were discounted-, which is 60% less than the jobs that were generated in the past year.

Thus, the data offered this Monday by the Ministries of Labor and Social Security shows, on the one hand, how the labor market continues with the positive inertia of recent months, but that it has been possible to maintain it thanks to the push of the summer and the expectation of a massive influx of tourists in the coming months.

In this way, in June, the list of unemployed accumulated a total of 2,880,582 people, the lowest level since October 2008, while enrollment in Social Security amounts to 20,102,037 people on average in seasonally adjusted terms, the highest figure in the historical series.

Regarding employment, the first half of 2022 ends with a creation of 262,935 jobs, discounting seasonality and the calendar effect. Regarding the level of employment a year ago, growth has been 837,799 employed. After having reached the level of affiliation prior to the pandemic, last September, employment has increased by 616,000 more people. The data implies that there are more than a million jobs than at the beginning of 2019.

In addition, as pointed out by the Social Security, the increase in affiliation has been especially intense in the most innovative and value-added sectors, among which Information and Communication (15.4%), Education (9.1%), Health Activities (8.4%), and Professional, Scientific and Technical Activities (8.0%).

In original terms, without correcting the effects of the calendar, the average affiliation to Social Security has grown by 115,607 people, closing the month with 20,348,330 registered (10,812,380 men and 9,535,950 women). It is the largest increase in the series in a month of June, with the exception of 2005 and 2021, conditioned by the regularization of migrants and the lifting of the state of alarm, respectively. In total, the average number of affiliates in original terms exceeds the level of a year ago by 848,053 employed persons.

On the other hand, registered unemployment fell in June in all the autonomous communities except Andalusia, where it increased by 6,345 people. The greatest decreases, by contrast, occurred in Catalonia (-9,946), Madrid (-7,443) and Galicia (-5,188), while the most moderate corresponded to La Rioja (-70 unemployed) and Murcia (-319).

All in all, 1,768,988 contracts were registered in June, 1.6% less than in the same month of 2021. Of all of them, 783,595 were permanent contracts, the highest figure in any month in the entire historical series. This volume of fixed contracts is 353.3% higher than that of June 2021 and represents 44.3% of the total contracts made in the sixth month of the year, a percentage five times higher than the average for the month of June.

Of the total permanent contracts signed in June, 312,824 have been full-time, three times more than in the same month last year; 292,679 were permanent-discontinuous contracts, multiplying the June 2021 figure by more than 10, and 178,092 were permanent part-time contracts, with a year-on-year increase of 316%.

The Ministry of Labor highlights that the change in trend in stable hiring is "especially evident" in sectors such as agriculture and construction, where the weight of permanent contracts now exceeds 47% and 73%, respectively, compared to the percentages 3.3% and 10.1% of the 2017-2019 average. It has also favored the youngest, since 43.9% of those under 30 currently have a permanent contract, in contrast to the 8.2% average for the 2017-2019 period.

All in all, in the first six months of 2022, almost 3.3 million permanent contracts have been made, more than triple that in the same period of 2021, thanks to the promotion of the labor reform, in force since the beginning of this year.

1 The artificial intelligence that hunts the thief by... 2 The cosmetic industry applies a sustainability treatment 3 Montero intends to limit the mobility and promotion... 4 Companies do not throw in the towel with algae as... 5 The shared bike business picks up pace 6 The drought of agricultural engineers cracks the future... 7 Kiss: the goodbye of a legendary group 8 Castilla-La Mancha has 138,396 unemployed, 40,236... 9 More than 4,700 Castilians and Leonese leave the strike... 10 The Generalitat Valenciana warns of the “worrying”... 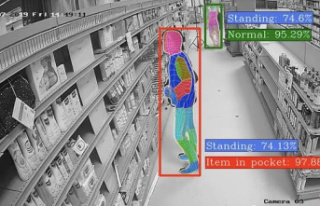 The artificial intelligence that hunts the thief by...