Within the framework of her visit to Madrid on the occasion of the NATO summit, the First Lady of the United States, Jill Biden, accompanied Queen Letizia this morning to the Madrid town of Pozuelo de Alarcón, where they visited the Center Care, Reception and Referral of Ukrainian refugees. 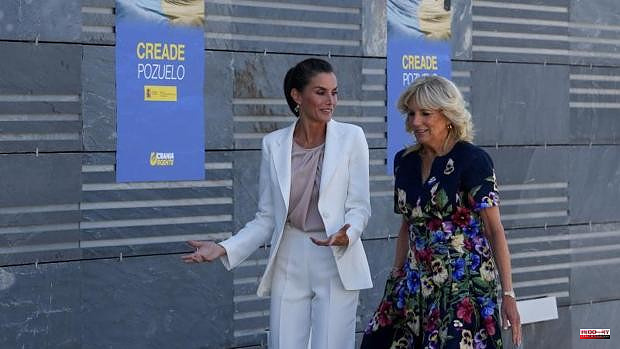 Within the framework of her visit to Madrid on the occasion of the NATO summit, the First Lady of the United States, Jill Biden, accompanied Queen Letizia this morning to the Madrid town of Pozuelo de Alarcón, where they visited the Center Care, Reception and Referral of Ukrainian refugees.

Since the Russian invasion of Ukraine began, a total of 124,000 war refugees have arrived in Spain. 22,000 of these Ukrainians have passed through this center, which the King and Queen visited with their daughters, the Princess of Asturias and the Infanta Sofía, last April.

Added to the Royal Family's commitment to refugees is that of Jill Biden, who last May traveled to Ukraine to meet with the wife of the Ukrainian president, Olena Zelenska.

There he promised him that he would watch over the mental health of the victims of the war. The First Lady has come to the center with her granddaughters, Maisy and Finnegan. The first of hers traveled with her on Air Force One, while the Second was already in Spain.

The Minister of Inclusion, Social Security and Migration of Spain, José Luis Escrivá, has accompanied the Queen and the First Lady on their visit to the center. There was also chef José Andrés, who has set up a food truck from his NGO World Central Kitchen in the courtyard of the facilities. There are already 40 gastrocaravans that the chef has taken to different border posts throughout Ukraine.

«I am here because I had to come to visit these volunteers who see such beautiful work here. We have been at war for 120 days and since it began we have not stopped. Hard work is what we are doing inside Ukraine. Because Ukraine has food, what it doesn't have is infrastructure, which is what our organization puts in”, declared Jose Andrés. On the visit of the Queen and the First Lady, he has stated that Jill Biden "has been very concerned about refugees" and is very involved in all humanitarian causes. He has also highlighted that "the work that is being done in Spain with the Ukraine is worthy of admiration".

The Center for Attention, Reception and Referral for Ukrainian refugees depends on the Ministry of Inclusion, Social Security and Migration. It combines social care with the issuance of documentation by the Police, which allows Ukrainian refugees to obtain residence and work permits within 24 hours and gives them access to health and education, social support, accommodation and economic aid. It also provides information on the procedure for applying for asylum and general questions about accommodation, social support and economic aid for victims of war.

1 Valents incorporates in Lérida a former deputy of... 2 The purgatory of devoured, scorched, dismembered and... 3 The Valencian PP opens the door to sign in Citizens... 4 The renovation of the lighting reaches the avenues... 5 The works of Barber Avenue begin on July 4 and those... 6 The Prosecutor's Office asks for three years... 7 These are the roads blocked today in Madrid by the... 8 The PSOE takes Ayuso's changes to the Telemadrid... 9 Madrid will bring 250 experts in teaching Spanish... 10 Advisors who do not go to an investigation commission... 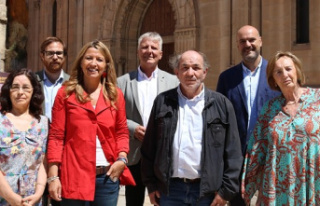 Valents incorporates in Lérida a former deputy of...