Leipzig trembles in the CL: Hertha gambles away and has to be relegated 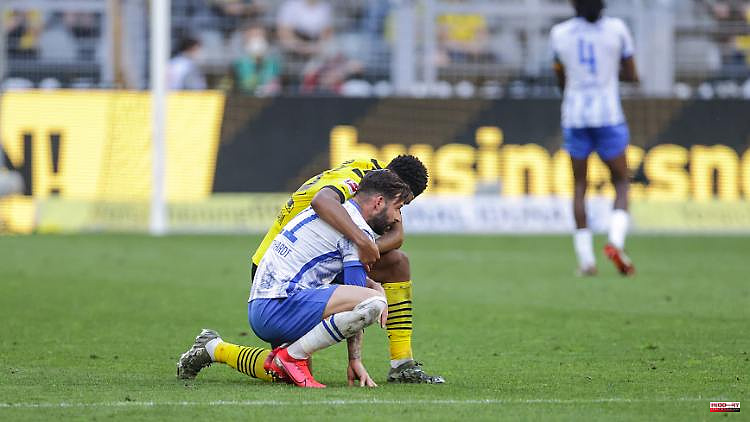 In the very last few minutes, the Bundesliga season finale gets really wild again. Hertha BSC gambled away the promising lead at Borussia Dortmund and was sent to relegation by Stuttgart in injury time. VfB celebrates relegation, Berlin has detention.

Felix Magath and Hertha BSC have to go into the penalty loop to save themselves from being relegated to the Bundesliga. The master coach lost with the Berliners in the season finale at Borussia Dortmund 1: 2 (1: 0), Hertha slipped behind VfB Stuttgart, who won in added time against 1. FC Köln (2: 1), to 16th place. place in the table. On May 19th and 23rd, it's all about staying up in the league at the end of a misguided chaos season.

Ishak Belfodil (19th) initially disrupted the harmonious farewell party in Dortmund with his penalty kick. BVB started the game in front of 81,365 spectators as a mild summer kick, but pulled themselves together in the second half. Erling Haaland equalized in his last game for BVB with a penalty kick (68'), Youssoufa Moukoko (84') made it 2-1.

Ecstasy in Swabia: VfB Stuttgart managed to stay up in the league at the last minute. The team coached by Pellegrino Matarazzo defeated 1. FC Köln 2-1 (1-0), buoyed by 58,453 vociferous supporters, and sent Hertha BSC into the relegation game.

Sasa Kalajdzic (12th) and Wataru Endo (90th 2) scored in Stuttgart's victory. Anthony Modeste (59th) had meanwhile equalized after a serious mistake by VfB keeper Florian Müller. Despite the defeat, Cologne still has seventh place and thus participation in the playoffs for the Europa Conference League.

Arminia Bielefeld gave everything for the miracle - and is relegated to the 2nd Bundesliga for the eighth time. The East Westphalians wrestled the favorite RB Leipzig 1: 1 (0: 0) and in the meantime made the Saxons tremble for the Champions League participation.

In the end it was not enough for Arminia to jump to the relegation place. A win would have been a requirement, and VfB Stuttgart would have had to lose heavily.

Janni Serra (70th) gave Bielefeld the lead and fueled at least a little hope for a miracle, Willi Orban (90th 4) equalized for Leipzig and brought RB into the premier class for the fourth time in a row on their own. RB still has to shake itself quickly. The DFB Cup final in Berlin is in exactly one week. Opponent: Fribourg.

SC Freiburg missed out on participating in the Champions League for the first time. Coach Christian Streich's team lost 2-1 (0-0) at Bayer Leverkusen and couldn't get past RB Leipzig in the final table.

The sports club finished sixth after their dress rehearsal for the DFB Cup final and secured the Europa League ticket for the second time. For the premier class qualification, SC should have won the game and hoped for a defeat by Leipzig at Arminia Bielefeld.

Lucas Alario (54') and Exequiel Palacios (90', 7) scored the hosts' goals in front of 30,210 spectators in the sold-out BayArena, giving Rudi Völler the parting gift he had hoped for. Janik Haberer (88th) scored the visitors' equalizer in the closing stages.

Union Berlin has crowned a successful season by entering the Europa League. The Köpenickers secured fifth place in the table by beating VfL Bochum 3:2 (2:0). Thus, in their third season in the upper house, the Berliners surpassed the success of last year, when coach Urs Fischer's team reached the Conference League.

In front of 22,012 spectators in the An der Alten Försterei stadium, Grischa Prömel (5th) gave the Berliners the lead in his last game for Union, Taiwo Awoniyi scored twice (25th, penalty kick and 88th). Simon Zoller (55th) and Eduard Löwen (79th) scored the goals for Bochum, who had already secured relegation before the last matchday.

Despite Robert Lewandowski's last goal in the Bundesliga, the German record champions Bayern Munich were not able to say goodbye to the summer break with a win. After all, the Pole, who wants to leave the record champion early despite a contract that runs until 2023, contributed the second guest goal in the 40th minute to the 2: 2 (2: 1) at VfL Wolfsburg.

The Munich team, who were particularly dominant in the first half, took the lead in the 17th minute thanks to a header from Josip Stanisic. Seconds before the half-time whistle, Jonas Wind scored the goal before ex-national player Max Kruse (58th) gave the Wolves a well-deserved point with his twelfth goal of the season.

At the end of a disappointing season, Borussia Mönchengladbach shot the frustration out of their souls - but Adi Hütter will not return to the coaching bench. The Rhinelanders won 5-1 (3-1) against TSG Hoffenheim, it was Hütter's last game as coach of Borussia. "We have mutually agreed on this," said the Austrian on Sky.

Eintracht Frankfurt has put on a proper dress rehearsal for the Europa League final. Four days before the final against Glasgow Rangers in the Rhine-Main duel at home strong FSV Mainz 05, coach Oliver Glasner's team came to a 2-2 (2-1) win and can go to the showdown with a good feeling even without a league win travel to Seville.

Tuta (26th) and Rafael Borré (35th) scored for the Hessians, who continued their negative series in the Bundesliga. Due to the goals of Marcus Ingvartsen from Mainz (10th/49th), the SGE remained without a win in the eighth league game in a row. On Wednesday (9 p.m. / RTL, RTL and in the live ticker on ntv.de) the Frankfurt team is about the first international title in 42 years.

SpVgg Greuther Fürth said goodbye to the Bundesliga without an away win. The cloverleaf lost 1: 2 (1: 1) at FC Augsburg. FCA, who had last week secured themselves the league for the eleventh year in a row, took the lead in a chaotic game through Daniel Caligiuri (11th). He converted a penalty kick. 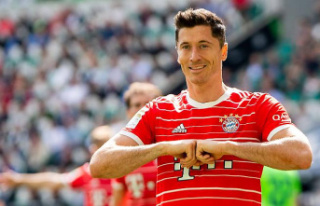