For Guennadi Chizhikov (Donestsk, 1964), president of the Ukrainian Chamber of Commerce and Industry, Russia has already destroyed three houses. 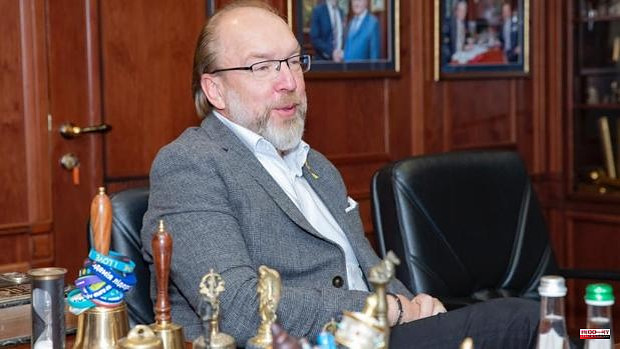 For Guennadi Chizhikov (Donestsk, 1964), president of the Ukrainian Chamber of Commerce and Industry, Russia has already destroyed three houses. The first time was eight years ago, when pro-Russian militias attacked the Donbass leaving their Donetsk home in the midst of fighting; the second in Shurova, near Slaviansk. “Two bombs were dropped near my home. Then the Russian soldiers looted everything inside." The last one was in February, when he took refuge with his family in a town 40 kilometers from kyiv that ended up being occupied by Russian troops. “In just two days the Russians took control of the town, the attacks and shelling were so intense that we couldn't move from the basement for a week.

One day a bomb fell 200 meters from our house, the remains of shrapnel embedded in the walls and we decided, together with some neighbors, to set up a convoy of vehicles towards the main road, which fortunately allowed me to get my family to safety». His fate, however, does not lessen one iota of frustration. “Three houses have been destroyed and I have been robbed. What am I supposed to tell my children? That they trust Russia? Putin has destroyed relations between two nations for at least two generations."

Chizhikov returned to kyiv to manage from the Chamber of Commerce the enormous crisis that the Russian invasion implies and also the international alliances, increasingly impatient in the face of a crisis that is dragging on, generating a world economic crisis that threatens to spread the specter of hunger throughout the planet. "The Europeans call me and say 'Guennadi, please, we are tired, find a solution to stop the war. Couldn't you hand over part of the territory, for example? I answer them: 'Stop, what? We cannot stop the all-Russian mentality, because the problem is not just Putin, he has transformed the population in the last 20 years. We regard Russia as our grandparents regarded Germany in the 1940s, a fascist state."

The economist understands well why doubts arise, although he does not justify the West falling into the trap. "Russia has always worked very well with propaganda," he explains. “Historical advances should be aimed at seeking better living conditions and greater morality. Europe embodied morality for a time, but after World War II it got used to comfort and combats any kind of discomfort with money or concessions. He has forgotten the lessons of World War II, so he thinks it would work to say to Putin, please take a little bit of Ukraine and we'll forget about it all," he lamented. “Europe does not understand that the problem is much more serious. In 2000, Putin already created a problem in Moldova [by promoting the autonomy of Transnistria] by starting a trend: starting a crisis that he never solves, like a bad surgeon who does not suture well and causes the wound to fester. They created a problem in Moldova, in Azerbaijan and Armenia, then in Georgia, in 2014 in Ukraine with Crimea and Donbass, and now in the whole country. That's why I ask my European colleagues, what ending do you expect?

On the walls of his office, photographs with Ukrainian presidents speak of his long-standing influence as a manager. “In the business world, we have something called risk management. Before doing business with someone, you have to look at their history. It applies to Putin: from a business point of view he has become an unpredictable agent and we need to progressively get rid of our dependency on him. However, Europe reacted all those years in reverse: buying more. The worse he behaved, the more he bought from him », he continues. “Europe puts his interest above morality and that implies a problem of survival. He found that the Russian neighbor is problematic and has had 20 years to look for alternative sources of gas, but it is too comfortable to continue buying gas from Russia. Europe intends to pay for solutions, so I ask my European friends, when are you going to stop negotiating with Russia? When Ukraine is occupied? When the Baltics are occupied? When Poland is occupied? When are you going to put morality above your immediate needs? For me, it is the only possible equation.

Chizhikov knows what he is talking about because, unlike the West, he has been suffering from the invasion for eight years. “The war started in 2014 although few considered it a war. I was born in Donetsk and used to visit my family every weekend. At the beginning of 2013 I began to see unknown faces on the streets who spoke with a strange accent and dressed in a style that is not typical of the area. It was obvious that they were coming to cause trouble. A couple of months later, the world forgot how it started and that is why Russia's talk about a Ukrainian 'civil war' caught on abroad. What civil war? It was a Russian destabilization operation », he regrets.

The economist urges Europe to open its eyes, to abandon any temptation to make concessions and to bet on Ukraine's integration into the EU to save the food crisis caused by Moscow. “Ukraine has always been the breadbasket of Europe, and we wanted to become the supermarket of the world not only by growing but by processing what was grown. We are the world's leading producer of sunflower oil, controlling 52% of exports, we rank fourth in the world in the agricultural sector for grain production, we export 45 million tons of grain because we produce five times more than we consume. 65% of our exports go through the ports: every month, 4.5 million wheat and other cereals leave our ports and that makes other countries dependent on Ukraine, such as Egypt, Indonesia, Bangladesh, Yemen, Morocco... »

However, “Russia has cut off vital exports to satiate world hunger. Bread prices have increased between 20 and 30%, hundreds of millions of people may face starvation according to the UN. We try to get the grain through our western land border but it is not possible. 2.5 million tons of oil are stored in our warehouses. In April we were able to move with trucks or trains a maximum of 2%. Imagine the number of months and trucks we need. European logistics is not prepared for such a volume of road cargo from Ukraine."

To this is added the next harvest, to be harvested in two months, not as voluminous as the previous ones due to the war «but we predict that we will harvest 70 or 75% of the previous production and we do not need it. The problem is that our grain tanks are already full and we can't get them out. Where are we supposed to store the new production? », he wonders.

“Ukraine will continue to be vital for agriculture, and the EU must think about how to help Ukraine, with the construction of new compatible roads and railways that facilitate the transport of goods. You have to start investing in it as soon as possible. We need a more agile customs system that avoids waiting three or four days for cargo trucks and new systems that integrate Ukrainian products. But above all, to motivate Ukrainian production, it is necessary to integrate into the European Union. What are we fighting for? For the future of the European Union, because we feel part of the EU, and that can be positive for the EU. We proved to be a country willing to fight for common ideals, to die for European democracy and to defend European territory from an unpredictable neighbor. In addition, if we integrate our productive capacity with the European together we can be the most important international agent in the world because we will supply bread to the world”.

1 Associating mental health and massacres, an alibi... 2 The 'double debt' with which France drowned... 3 Emotional and technological waste in the musical tribute... 4 The 'white label' opens new horizons in... 5 Mechanical workshops step on the accelerator of innovation 6 Spanish engineering marks a milestone in the Philippines... 7 Artificial intelligence learns to think green 8 "I suffered from anxiety, and couldn't find... 9 “We are experiencing the most direct and real exposure... 10 The escaped murderer from Zaragoza: "I stabbed... 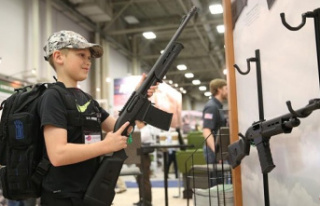