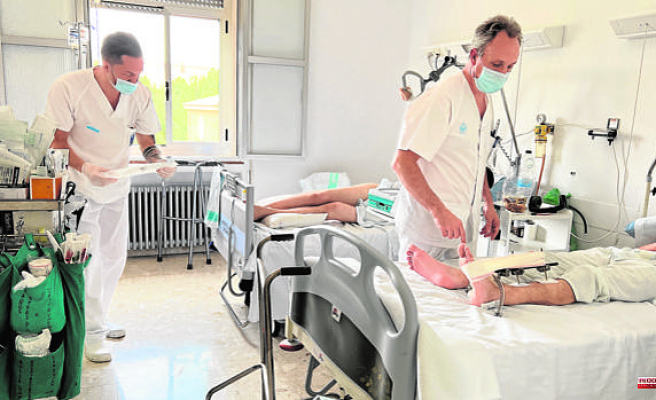 One month. It is the time that has passed since the first military plane with Ukrainians wounded in war landed in Spain. The flight arrived on May 5 at the Zaragoza Air Base with three patients who were transferred to the General Defense Hospital in that city. Fourteen days later, another eleven Ukrainians were admitted to this same center. “The Ukrainian Ministry of Health gave us a list and we selected those that our hospital, due to its capacities, could attend to,” explains its director, Colonel Juan Antonio Lara.

«For us, all the members of the Armed Forces are like a big family. We consider these patients part of our military family," explains Colonel Lara, while pointing out that Russia's invasion of Ukraine"is a war for Europe as a whole": "They [Ukrainian soldiers] are in the front and are physically exposed, we have had to be in the rear ».

This week, the Defense Minister, Margarita Robles, visited these Ukrainian patients, war "heroes" to whom she wished a speedy recovery: "We feel very proud to be able to help, I think the work you are doing in Ukraine is heroic, fighting for peace. You are an example to the world." Robles added: "We hope that the war ends soon, that you can return home and that you feel very proud."

The fourteen patients arrived "with highly complex injuries that affect different organs," says Colonel Lara. These are injuries caused mainly by two reasons: by firearm or by blast wave. The difference is that the first injuries "are usually located in one or two extremities", while those injured by a shock wave are usually affected "several extremities, head, face, neck, eyeballs...", says the head of the Traumatology Service, Lieutenant Colonel Juan Sevilla Tirado, who also points out that they have acoustic trauma.

According to Lieutenant Colonel Sevilla, the patients landed in Spain with damage control surgery, "which is what is done in the first moment in which there is a severe injury to a limb." They arrived with the fractures already stabilized and some first cures already done, so "amputee patients were already coming."

After the first surgeries, there are now eight patients who have started rehabilitation treatment. “They undergo two hours of physical therapy daily. We are waiting for another four to start after surgery, "says the head of the Rehabilitation Service, Colonel Alfredo Blasco. And he affirms: «Some are being managed to fit a prosthesis and for those who have suffered severe injuries, and have to go in a wheelchair permanently, the treatment has to be as effective as possible so that they can walk and have independence as soon as possible. ».

Most of these fourteen injured are between 21 and 25 years old. For a month they have lived with physical pain and that caused by trauma; with the frustration of not being able to continue fighting and the concern of being away from their families, with the silence and loneliness they feel between one communication and the next. “We are experiencing the most direct and most real exposure to the trauma of war. They are traumas with a very great intensity, ”acknowledges the head of Psychiatry, Lieutenant Colonel Araceli Gámez. Hence, the hospital's medical team also has to take care if they want to continue helping their fellow Ukrainians: “Many of us, especially the military, are trained to work with this type of situation. Even so, for us it is also a very big effort and we are working to learn positive lessons”.

“The vast majority of patients have left their families there. Some in occupied zones, others in devastated zones or even in zones of active conflict. In fact, this is one of the main factors influencing his recovery and treatment from a psychological point of view," says Lieutenant Colonel Araceli Gámez. “Everyone has expressed to us their intention to return to Ukraine as soon as possible, to help their compatriots and be with their families. They want to recover to return, which is favorable," admits Lieutenant Colonel Gámez.

None of the wounded wanted to participate in this report. It's early to do so, even for the 50-year-old patient, the only older one, who is a military veteran from Ukraine. They prefer to keep their identity anonymous. It's too soon even for them to start a group therapy with each other, who know better than anyone what it's like to live through the terror of war.

«It is difficult to carry out a psychological intervention if your focus of introspection is located in a distant place and outside of your own personal history. At the moment, the therapy they follow is individual, but we do allow them, within that, to have their own spaces for emotional ventilation, not only with us, but also with all the professionals at the hospital”, highlights Gámez.

The rest of the hospital staff also enters these 'ventilation spaces': nurses, guards, security and cleaning teams... Even the interpreters of the Aura association, Ukrainian citizens who have been living in Spain for years and who take accompanying their compatriots as a daily obligation, since they understand that it is the best way to help their country.

“The whole hospital empathizes with them. We have office staff who go in the afternoon to talk to them and give them support,” says Colonel Lara. A "love and company" like the one that a brigade of the Air Force -who speaks perfect English- gives to the only Ukrainian woman who is recovering in this hospital. Every afternoon he spends an hour talking to her. "Yesterday he brought her a jar of cookie ice cream," says Lara. And he concludes: «The population has a special sensitivity towards the Ukrainian wounded. I think everyone understands that they are fighting for us, for democracy, for a series of values ​​that we all defend.

1 The escaped murderer from Zaragoza: "I stabbed... 2 Sánchez's 'beautiful government' to... 3 Republican states in the United States make it easier... 4 Agustín Zulueta: "We contribute about three... 5 Why is the Roland Garros trophy called the 'Musketeers... 6 Abascal warns PP "Either you govern together... 7 They judge a promoter who deceived the public throughout... 8 The Minister of Health: «The Ministry has the key... 9 Nick Cave, black magic at Primavera Sound 10 Due to potential listeria, cheeses from 9 states have... 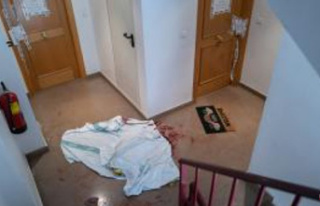 The escaped murderer from Zaragoza: "I stabbed...