The new generations will take the helm: «Traditional fishing is not going to disappear»

The smell of saltpeter, sunrises at sea, calloused hands or facing a harsh storm.

The smell of saltpeter, sunrises at sea, calloused hands or facing a harsh storm. The years go by and artisanal fishing continues to be very present, although not undeterred, over time and to the already widespread industrial fishing. Although its human capital is increasingly in danger, it is possible that with the retirement of the most veteran and the descent of boats, the business will be revalued and attract the attention of the youngest, full of ambitions but also with new objectives and priorities, very different from previous generations.

Artesàns da Pesca, the Galician group expert in traditional capture, advocates adapting to the new times and maintaining what is fundamental for them: respect for the product and its workers.

They seek the first of them by offering only seasonal fish and alternatives to avoid overexploitation of some species. "Before, fish like mackerel or sea bream were hardly seen in restaurants," explains Roberto Rodríguez, manager and partner of the cooperative.

The enhancement of species little used in the gastronomic world goes hand in hand with a commitment to sustainable fishing and a rejection of the concept of 'noble fish', since, according to the expert, "fish is good in itself, it is not by his name". The state of the waters, the behavior of the fish and global warming are very present concerns in the daily life of these fishermen. According to Roberto Rodríguez, the increase in water temperature has caused them to begin to see Mediterranean species in the Cantabrian Sea. "There is no awareness about this because there is no information," denounces the professional. "It's very difficult for people to know the extent of the problem if they don't get it from the insiders and experts," he adds.

The correct treatment of the product from the moment of capture is one of the pillars of the group and essential factors to achieve a good work-life balance, essential for them. Far from those times when dinner was the main meal at the manager's house after a long day spent by his father at the sea and the fish market, now the fishermen arrive home at noon. "Why do I want money if I don't enjoy it?" reflects Pedro Rodríguez. Quality of life is one of the priorities of the new generations, and it is not at odds with the quality of the product and the results. The cooperative is committed to fishing less and fishing better. "In this way we have time to properly treat the fish and, by returning to land earlier, the product is less exposed," adds the professional.

Following the line of respect for the fish and the sea, the cooperative's work is based on the fishing of seasonal products, which also ensures the highest quality of the product. Currently, turbot is one of the fish that is working the most, the viceroy and sea bream season begins, and as for shellfish, spider crab is their specialty.

Despite the more than installed industrial fishing, fish farms and the creation of farms, such as the controversial project of the first octopus farm, which will be installed in Gran Canaria, artisanal fishing continues to be present in the commercial panorama. From Artesàns da Pesca, Pedro Rodríguez highlights the difference in results between traditional capture and new methods. "Traditional fishing is not going to disappear because it offers a very different product from what a fish farm can sell," he explains. “The fish raised in these facilities eat what they are given – industrial fishing meal from third countries – but in freedom they eat à la carte,” says the manager.

The cooperative, created in 2009, works with restaurants distributed throughout the Spanish geography such as Saddle, a restaurant located in the center of the capital and which already has a Michelin star and two Repsol Suns after only two years since its opening. Together with them, the enhancement of quality fish materialized in a small event in which the turbot, mackerel, grouper or sea bass shone together with funds and wines perfectly chosen for each dish. The Taverna del Clínic in Barcelona, ​​the El Olivo restaurant in Valladolid or the Skina restaurant in Marbella, are other of the many establishments with which the provider works.

Finally, doubts about the future of fishing are not reduced to generational change or climate change, but to the rise in prices. The current international scene has meant that, like many other products, the price of fish rises notably. From the point of view of Pedro Rodríguez, fish will not become a luxury product, but it will be scarce due to the increase in the world population and the need for protein. "My opinion is that species such as horse mackerel, which we currently export a lot to other countries, will consume in a few years," says the expert.

To ensure that the best product reaches the plates of diners throughout Spain, there is a lot of work behind it. Within artisanal fishing, the most common within the minor arts is "to start before dawn, and collect at sunrise," says Pedro Rodríguez. Once the fish has been collected and gone ashore, it is possible to sell the catch in the fish market of the same port or in another place, to which the skipper or crew member would transport the fish, all of this always with the same objective: that it be the best fish the one who arrives at the restaurant.

1 Ten places to try good sushi 2 "The more horrible, the better": this was... 3 Sónar recovers full normality with 122,000 attendees... 4 C. Tangana is crowned as the new king of the Sónar... 5 July 4, a key date for the future of Vicente Aleixandre's... 6 Bullfighting loses Andrés Vázquez, the flag of classic... 7 Sónar comes back to life between experimentation... 8 G men take another triumphal walk in the US: "It's... 9 "It would be more convenient to make the underwater... 10 Madrid begins the procedures to protect the Aleixandre... 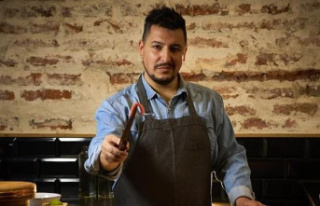