G men take another triumphal walk in the US: "It's like reliving adolescence"

It has been 35 years since Hombres G came to the US for the first time.

It has been 35 years since Hombres G came to the US for the first time. It was a promotional trip to New York, in 1987, when the four kids from Madrid had become a phenomenon as huge as it was crazy of Spanish pop-rock, between hot powder -pica, Marta's pacemaker, the crocodile girl and the 'figlio de la mia mamma'. “As soon as we arrived we went to dinner at the Hard Rock Café, which was then a great novelty and was the latest in New York and there was a shooting,” David Summers, the singer, bassist and main composer, recalled to this newspaper on Thursday afternoon. from the band. "We freaked out, what a landing."

But the US ended up becoming a territory heavily trodden by the band, thanks to its overwhelming success in Latin American countries.

Like other Spanish groups and artists of the eighties and nineties -Mecano, Héroes del Silencio, Joaquín Sabina- Hombres G became idols of the time from Mexico to Chile. Their fame eventually spread to Hispanic immigrant communities in the US, and the group began touring the country after their reunion at the turn of this century.

As in Spain, the US Hispanic fans have not turned their backs on them over the decades. A line wound around the House of Blues, one of Chicago's premier concert halls, an hour and a half before the curtain rose. 'Sold out' poster, 'there are no tickets', with a capacity of 1,800 people. Same as the night before, which also filled. And just like the concert scheduled for this Friday in New York, at the Hulu Theater in Madison Square Garden, where 5,600 unconditional fans have left the rest without tickets.

"The audience we have here is awesome, they enjoy the concerts a lot," said Summers, who warned that it is also a more rock-oriented audience, more quarrelsome than in Spain.

"This is like reliving adolescence," said Miriam Ramírez, as she advanced the queue to enter the premises. "And that was the best time, it was the best music." She's from Venezuela. Others are from Colombia, from Ecuador, some are from Spain, but, above all, from Mexico or of Mexican origin. That was noticeable from the moment Summers took the microphone and told the audience: "We are delighted to be here with you, with such a cool audience."

They had just played 'I'm going to have a good time', the opening song, but the 'frontman' promised something else: "We're going to have a fucking good time." It became a reality immediately with 'Attack of the Crocodile Girls', one of the hits from their first album, with people chanting “it was you, you think I didn't see you”.

The audience was packed, like old-school concerts, where you can't move a millimeter. The private boxes on the upper floors, amidst the rococo stonework and House of Blues details, were also packed to the brim. "I think they have let too many people pass," lamented a girl, who did not dare to fight against the crowd to see Summers up close.

The bravest went to the bar and came back loaded with beer, so they didn't have to come back. By the time G-Men intoned the "what's the matter, are you drunk?" of his veteran success 'Our bar' and many in the public were already. The group -Dani Mezquita on rhythm guitar, Rafa Gutiérrez plucking on the same instrument, Javier Molina on drums, as well as Summers and the support of Juan Muro on sax and José Carlos Parada on keyboard- chained songs known to all with new songs from their latest albums. But in the encores they were all generosity and dedication: they closed with 'Venezia' and the generational anthem 'Sufre mamón', to the joy of the respectable.

They also threatened, with all their members about to turn sixty or with them already turned sixty, to return. "In 2023 we will be 40 years old as a group," Summers said, announcing a tour for that anniversary. "It's a lifetime, but they've flown by. Do you know why? Because we've had a hell of a time. We've been running around the world with our best friends, since we were 18 years old." In Chicago, in New York and in the rest of the cities of the USA they wait for them again, no matter how old they are.

1 "It would be more convenient to make the underwater... 2 Madrid begins the procedures to protect the Aleixandre... 3 Patti Smith and the glory routine 4 An exhibition reveals the most mature look of Laxeiro... 5 Play the 'online escape room' created by... 6 The Government considers the crisis in Catalonia to... 7 Traveling by direct Alvia train from Castilla y León... 8 Government discards breakwaters that could save Albufereta... 9 This is how the Civil Guard caught the fugitive Miguel... 10 The Government does not confirm a meeting between... 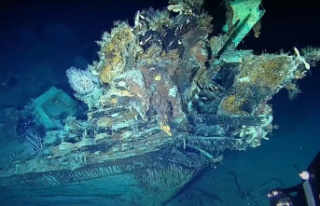 "It would be more convenient to make the underwater...