The simply terrified grandmother trembles as ambulance technicians in red jumpsuits and bulletproof vests gently lower her onto a stretcher and carry her to the train. 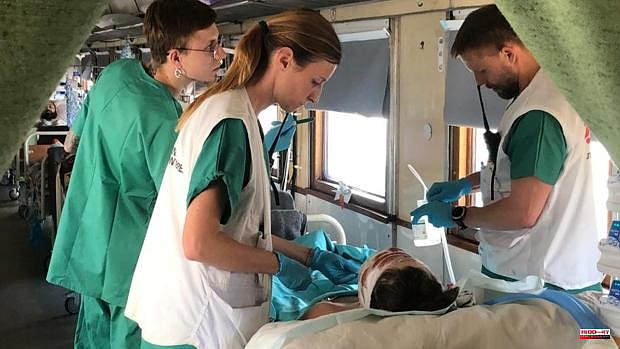 The simply terrified grandmother trembles as ambulance technicians in red jumpsuits and bulletproof vests gently lower her onto a stretcher and carry her to the train. Her eyes move frantically from east to west and north to south, confused by the presence of people with short-wave radios and papers in hand, counting, taking down names and deciding which car she should board.

More than the war, he is disturbed by not understanding what is happening around him. “It is something that worries us a lot. Every time we move more and more elderly alone, very vulnerable, who did not leave their towns at first because they had no one to do so with and now they travel alone, "says Yasser Kamaledin, head of the Doctors Without Borders (MSF) operation, staring on the stretcher where the old woman can barely contain her fear.

"We are concerned about what will become of them once they reach other cities far from their environment, where they don't know anyone."

Only a few hours earlier, two rockets had hit some 500 meters from the Pokrovsk train station, the only one in the Donbass still in Ukrainian hands and a vital artery for the evacuation of displaced people from the provinces coveted by Russia, causing four injuries and leaving a three-meter crater, but the MSF team seemed as used to the contingencies of war as their patients. Half a dozen ambulances were waiting their turn next to the railway tracks, waiting for the staff to transport their passengers inside the medicalized train, provided by Ukrzaliznytsia, the Ukrainian state railway company, an essential institution in the management of evacuations and the transportation of humanitarian material and supplies to every corner of the country at war. There are actually two trains modified by the NGO, one of the most active and visible in Ukraine, used to transport injured or vulnerable people with special needs; the second train, more modern, even has an ICU car with five beds and everything necessary to deal with emergencies. In the cars, the seats have been replaced by hospital beds and drippers for serum and medication and in each window rests a briefcase with the medical reports of its occupants.

The project started at the end of April, and since then there have already been 21 humanitarian trips on the train that started on Wednesday from Pokrovsk to Lviv. "Our mission is to decongest Ukrainian hospitals, which are often overwhelmed, by transferring stabilized patients to medical centers in the west of the country, much quieter than Donbass," explains Yasser Kamaledin, the head of "long-distance ambulances" in the that the limping wagons have become. The majority of passengers, he indicates, are injured by explosions or have traumatic injuries as a result of bombing that require postoperative care, although there are also seriously ill patients whose ailments can no longer be treated in their cities due to lack of means, space or personnel.

The intensification of the military offensive, with the cities still under Ukrainian control falling like cards in the face of the inclement Russian push that has been going on for three months -although it began in Donbass in 2014-, is noticeable in the hospitals and also at the railway station from Pokrovsk - the only train exit from the Donbass after the bombing of the Kramatorsk station on April 8, which killed 59 people - where hundreds of people gather to flee to Dnipro aboard passenger cars and two dozen Patients wait in medical vehicles for their evacuation on the MSF medicalized train.

The fall of Liman in Donetsk, which leaves the cities of Sloviansk and Kramatorsk within Russian reach, as well as the fierce fighting in Severodonetsk and Lisichansk, the last Ukrainian holdouts in Lugansk, have driven many civilians from their homes who until now They were reluctant to give up. “We come from Bakhmut, where things are getting so bad that we seriously fear for our lives,” explained Maxim, a city resident who was waiting with his wife and two children for a train to Dnipro. “Last night, while we were sleeping, a bomb fell in our neighborhood. The shock wave blew out our windows, and we decided it was time to leave », he detailed. A couple of benches away, Svetlana, 73, clutched her bags next to her son. "We come from Konstantinovka," she said, "where there are more explosions every day. I am very scared and I have decided to go with my daughter to Denmark, where she lives. I would prefer not to leave because I was born there and this is my homeland, but we fear that in a short time the fighting will reach my village and my son insists that I must get to safety.

The Russian advance is noticeable in terms of wounded and overcrowded hospitals. “We usually get evacuation requests a day before leaving from different hospitals, so we never know how many we are going to transfer, but in the last two or three trips the number of patients from Donbass has increased a lot. Among those we pick up in Pokrovsk and Dnipro, today there will be 38, well above the average we used to move, of 20 or 25 people per way, "Kamaledin continues. "Hospitals do not need so much medical material as more beds," says the official, with whom 17 other MSF members are traveling, including doctors, nurses and other staff. The second train is operated by 20 toilets. The NGO has already transferred some 570 people aboard the two trains since the program began and hopes to continue with a campaign that seems especially necessary in Donbass, where fighting is being waged house by house and the Russian attack is gaining ground meter by meter

MSF is the most visible face of an often unknown but essential cooperation. At the Sloviansk evacuation point, three vans with stickers from VOSTOK SOS, a Ukrainian NGO created by activists after the 2014 Russian offensive, and a British flag stop dead. Three British volunteers emerge from one of them and open the back door of the car, where five elderly people are lying on mattresses. Two Ukrainians emerge from the other two: in the seats, six other people, including a young child, from various villages in Donetsk who decided to leave due to the imminence of the Russian arrival. The British, two women and a man in their thirties, lift their passengers dead weight and deposit them with care on stretchers and wheelchairs to facilitate their access to the center.

"We arrived individually with the sole desire to help," explains the head of the group, who calls herself British Expeditionary Aid and Rescue (BEAR) and declines to identify herself to avoid reprisals. "We organize ourselves as a team and focus on the most abandoned areas, in villages and towns where others do not arrive, either because they are being occupied or because they have just been liberated," confides the young engineer who left her job in the United Kingdom to temporarily settle in Ukraine, where he has been for more than two months. Her partner, a farmer by profession, invested her savings in a van with which she drove for three days to Ukraine, and the third volunteer sleeps in her own van, converted into a work tool and a home. "As of yesterday, we had already evacuated more than a hundred people," continues the volunteer. «People receive us with great emotion, there are people relieved to know that they can leave, others are so happy that they try to thank us with gifts, others on the other hand are very distressed. Most of the time, the elderly don't really know what's going on and they're scared of being left in the hands of people they don't know and can't even communicate with,” she continues. BEAR's cooperation with VOSTOK SOS makes it possible to allay this fear, as Ukrainian volunteers take over communication with them to reassure them. "It's important because their evacuation allows those who take care of them to be liberated in some way: once they delegate that responsibility, they themselves are empowered to flee."

The British do not have any special training or come from activism, they simply felt the need to help in the humanitarian emergency created by the worst conflict in Europe since the Second World War. On the way back they have displaced people, but on the way, when they leave for the bombed-out towns, they are loaded with food to help those who do not want to flee, although it is increasingly difficult for them to find that load as it is difficult to find activists who, like them, venture into the depths of the conflict to save lives. “MSF does a great job, but other NGOs that claim to be here seem to be invisible, and the same goes for the UN or the Red Cross. We just don't see them and people need food, hygiene products and even clothes. All that humanitarian aid that they say they are sending only seems to reach kyiv and Lviv and right now it is scarce, "laments the young woman. “Sadly, the world is getting tired of the war in Ukraine and the flow of international aid is drying up. The world has to send food again, as in the beginning, because as long as the war continues, there will be a need.

1 Colombia launches to vote in presidential elections... 2 The escalation of the Euribor anticipates another... 3 Better today than tomorrow to bet on the new work? 4 The war in Ukraine puts the real estate sector on... 5 The clean solution with Spanish DNA to end space debris 6 Barcelona promotes the logistics alliance between... 7 The new battle for global hegemony is fought in the... 8 The insurance industry plunges into uncharted territory 9 «Has it been worth going back to Spain? This is the... 10 The Government contracted masks with surcharges of... 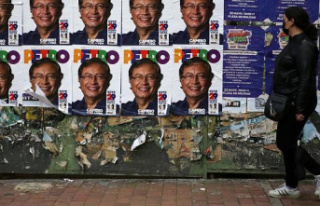