The Toledo City Council is already displaying the rainbow flag to show its support for Pride 2022. 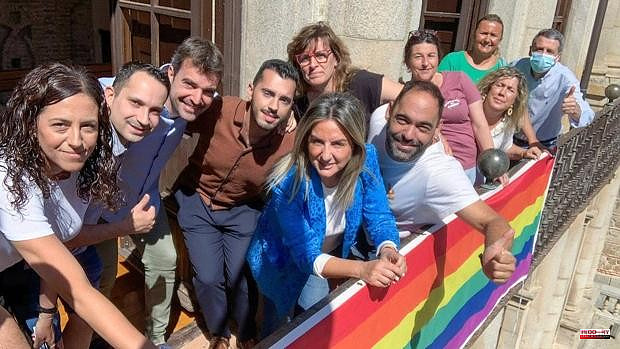 The Toledo City Council is already displaying the rainbow flag to show its support for Pride 2022. The Councilor for Youth, Pablo García, has presented, in the company of the president of Bolo Bolo, Ricardo Vicente, the program for Toledo Understands 2022, which is celebrated under the motto 'Proud of our law, CLM moves towards the future'. Among the scheduled events is the proclamation this Tuesday at 8:00 p.m. in the Plaza de Zocodover and the protest demonstration this Saturday from 8:00 p.m. from the Plaza de Zocodover and the Plaza del Ayuntamiento that will culminate with the Javier Fernández awards ceremony .

In addition, the facade of the Government Delegation in Zocodover will be illuminated from this Monday and until next Sunday with the rainbow flag and the flag has already been displayed from the balcony of the City Hall with the presence of the mayor, Milagros Tolón, and other representatives of the Corporation, as well as members of Bolo Bolo.

Espacio Tendillas 16 will host the screening of the La Culta Short Film Festival, this Monday at 8:00 p.m. And this Tuesday, June 28, the International LGTBI Pride Day will be celebrated with the proclamation and subsequent performance by the Talavera artist Libertad Montero 'La Pinchos' in Zocodover and the Kiosco El Parque, respectively.

On Wednesday from 12:00 to 4:00 p.m. the Plaza de Zocodover will have an information table to raise awareness of the importance of taking a rapid HIV test and from 4:00 to 8:00 p.m. rapid HIV test by appointment through Bolo-Bolo.

On Thursday at 12:00 p.m. the ‘Workshop on the history of the collective through the years’ will be held in the Padilla Assembly Hall. On Friday, the party will move to the Sonseca Family Discotheque with the 'Toledo Entiende Fest' and the participation of Sofía Cristo, Juanjo Martín, Tom Siher, Chumina Power, Brenda Star and River. Demonstration and party On Saturday, July 2, the day will feature two outstanding acts such as the tribute to Angy Kristel, «transformist artist of great relevance on stages throughout Spain during the 80s and 90s and to whom we believe it is fair to pay a tribute that will consist of live music with the saxophonist Tavi Gallart and an agape for the attendees”, Vicente maintained.

At 8:00 p.m., the festive and demanding demonstration will leave from the Plaza de Zocodover to the Plaza del Ayuntamiento and at 10:00 p.m. the Javier Fernández awards ceremony, who was the founder of Bolo-Bolo 21 years ago. The awards, in this edition, will go to Angy Kristel; the president of Chrysalis Castilla-La Mancha; former councilor Javier Mateo and the Minister of Equality and spokesperson, Blanca Fernández.

Next, the 'Over the Rainbow' party in the Plaza del Ayuntamiento will serve "to celebrate feeling proud of what we are and feel with this party full of LGTBI artists" with local drags Fenhydra, Libula The Luxe, AMA and Roci Nanta and the visit of RoRo and Valeria Star with Piruli Dj music, in addition to La prohibited and Víctor Algora.

On Sunday the 3rd at noon, the Bolo-Olympiads in Paseo de la Vega will offer different competitions and games such as High heels race, bag toss, tortilla contest, among others. At 1:30 p.m., the same space will feature the popular paella and, in the afternoon, starting at 8:00 p.m., the LGTBI Families Day with storytelling and activities for the little ones “supporting education in diversity ».

As expressed by the mayor of Youth, "from the Milagros Tolón government team we unanimously defend and support the group and this festival in which visibility is given and we demand real equality for all people, regardless of their sexual orientation" .

For his part, the president of Bolo-Bolo has claimed the need to have "a diverse future" and give "maximum visibility to the group" within the framework of this celebration that, as he has expressed, will also serve to warm up engines for the great demonstration in Madrid to be held on Saturday, July 9.

1 Runners will have a discount to travel with Renfe... 2 Aspace demands a comprehensive plan so that people... 3 ETA victims demand from Congress that there is no... 4 A large-scale cocaine trafficking criminal organization... 5 The court agrees to stop the 'puncture'... 6 Virologist Luis Enjuanes warns of a 99% loss in the... 7 Toledo doctor David Dylan publishes 'In the silence... 8 CSIF affirms that 600 educational and sign language... 9 The new express reform to get control of the TC lands... 10 Mazón regrets that Puig "is very far from the... 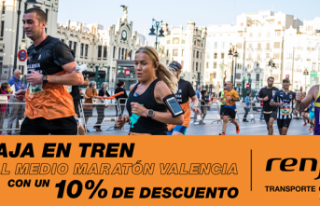 Runners will have a discount to travel with Renfe...