Rob Greenfield plods heavily through the chic streets of Beverly Hills, crumbling under nearly 30 kg of waste that he has meticulously stored in his transparent plastic suit since the beginning of his educational project. 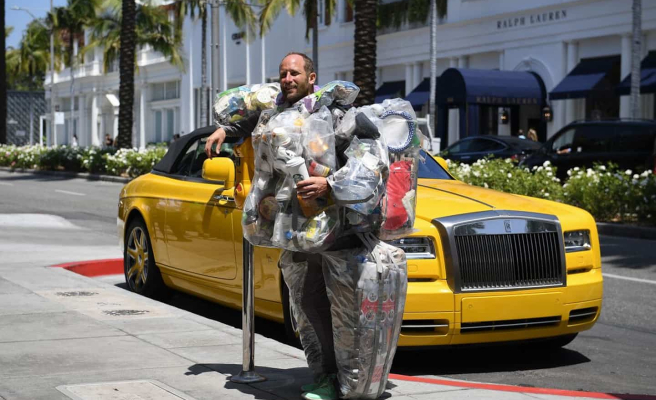 Rob Greenfield plods heavily through the chic streets of Beverly Hills, crumbling under nearly 30 kg of waste that he has meticulously stored in his transparent plastic suit since the beginning of his educational project.

“For most of us, waste is out of sight, out of mind. We put them in the trash and we never think about them again. I wanted to find a visual way to help people really understand what our accumulated waste represents, ”explains the environmental activist to AFP.

As part of his challenge, he decided to carry all the waste he generates with him for an entire month, walking the streets of Los Angeles to raise awareness among those who meet him.

Almost at the end of his experiment, Rob Greenfield carries with him 28 kg of waste, mostly packaging, placed in the huge pockets placed on his limbs, stomach and back.

The legs are so full that they give him a robotic gait, an effect reinforced by the metallic sound of empty cans clashing as he passes in front of a luxury store.

“On average, a person creates more than two kilos of waste per day, so the costume must be able to support a lot of weight,” explains the ecologist.

“It was around the twelfth day that I started to feel the weight of consumerism. I felt the weight, also saw the result and I said to myself "wow, it's crazy how much garbage we collect", he says.

The young man, who prides himself on having only 44 objects in total for his daily needs, is usually a champion of minimalism and gives advice on the internet to consume and pollute as little as possible.

In 2019, he had spent an entire year feeding himself without buying anything commercially, contenting himself with cultivating and harvesting whatever he ate.

But for the purposes of the experiment - which he had already conducted in New York in 2016 - he put his principles aside for thirty days to behave like the average American.

Thanks to his attire and the smile he always wears, Rob easily attracts the attention of passers-by and satisfies their curiosity about the values ​​he wants to promote.

“People understand the message and it helps me reach all categories of people. So yes, some believe I am homeless or have mental issues but overall people have been very positive,” he said.

1 A man arrested in Ponferrada for accumulating several... 2 "The Sun is God!": Turner and the sublime... 3 Castilla y León has not detected cases of monkeypox 4 The PP demands that Sánchez apologize to the national... 5 The PP appears as a popular accusation in the case... 6 Fernando Andújar will be the president of the Chamber... 7 Farm ravaged by flames: more than sixty cows perished... 8 Roland-Garros draw: time, streaming... How to follow... 9 Europe recommends smallpox vaccination for contacts... 10 Education will carry out a pilot project to develop... 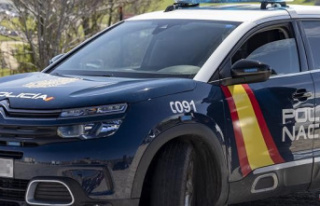 A man arrested in Ponferrada for accumulating several...