Agro-food Cooperatives Castilla-La Mancha has delivered this Friday its I Cooperative Awards, whose gala has taken place at the Palacio de Congresos de Albacete, after the celebration of its General Assembly. 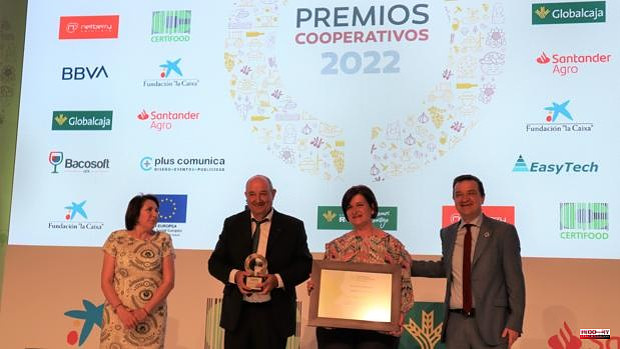 Agro-food Cooperatives Castilla-La Mancha has delivered this Friday its I Cooperative Awards, whose gala has taken place at the Palacio de Congresos de Albacete, after the celebration of its General Assembly.

In the category of 'Cooperative Excellence', the award went to Champinter, from Villamalea (Albacete); the award for 'Economic Sustainability' went to Virgen de las Viñas de Tomelloso (Ciudad Real); The Progress of Villarrubia de los Ojos has won the 'Social Sustainability' award; and Coopaman, in the province of Cuenca, with the 'Environmental Sustainability' distinction. The 'Solidarity Values' award was also given to Doctors of the World for their humanitarian work in Ukraine.

During the event, the president of the Agro-food Cooperatives of Castilla-La Mancha, Ángel Villafranca, pointed out that "this is a great day for cooperativism in the region", since these Castilian-La Mancha entities "distinguish themselves and dress up before the consumer".

“Our agri-food companies are leaders not only in food production, but also in values. Values ​​that a society like ours values ​​and for which we work every day, such as social responsibility, the environment, excellence, innovation and quality », he asserted.

Champinter, established in 1977 in Villamalea, is dedicated to the production of compost and the cultivation and sale of mushrooms and other edible fungi. This cooperative, recognized as a Priority Associative Entity of Regional Interest, is a European benchmark in the marketing of a wide range of mushrooms, mushrooms and other edible mushrooms, and is currently the first-tier cooperative with the highest turnover in Castilla-La Mancha, with more than 90 million euros per year.

On an economic level, Champinter and the Neofungi second-tier cooperative, of which it is a part, sell more than 50% of all fresh mushroom production sold in Spain.

It employs 389 workers in its region, betting on circular economy processes that close the cycle from compost production, seed cultivation, processing of fresh mushrooms, industrialization of the surplus through its own canning factory, to management and recovery of exhausted compost in the Recomsa second-grade cooperative.

Virgen de las Viñas, founded in 1961 by 15 small farmers from Tomelloso (Ciudad Real), is today the first first-grade cooperative winery in Spain and in the European Union due to its size and production volume. It currently has 3,000 partners, reaching a turnover of 83 million euros.

It stands out for its business efficiency and commercial development with the presence of its wines and oils in the main national and international markets.

Its commitment to creating value in the food chain is driven by its successful business management model, its ability to adapt to new consumer trends and its commitment to integrating and improving its size, leading various merger processes in the last decade that have led it to obtain recognition as a Priority Associative Entity of Regional Interest.

With an investment plan of 23 million euros, today it is the main bottling cooperative in the region with a volume of close to 20 million bottles.

Bodegas el Progreso in Villarruia de los Ojos (Ciudad Real) is the oldest wine cooperative in Spain with uninterrupted activity, since 1917, and with more than a century of olive and wine history. It produces an average of 80 million kilos of grapes and 7 million kilos of olives per campaign.

In terms of equality, El Progreso has launched an Equality and Prevention Plan against harassment in rural areas, and is also developing a project for the incorporation of young people into agriculture in its fight against depopulation.

Coopaman is a second-tier cooperative dedicated to the marketing of garlic, made up of six cooperatives from the Las Pedroñeras region, in the province of Cuenca.

With nearly 2,000 cultivated hectares and more than 17,000 tons produced annually, it has established itself as one of the most important Castilian-La Mancha companies in the marketing of garlic throughout the world, having achieved recognition from the regional administration as a Priority Associative Entity of Regional Interest.

But it is their commitment to research through their participation in numerous European projects and their innovative vocation that has led them to be one of the leading cooperatives in the new circular economy, both regionally and nationally.

Thus, in its facilities in La Alberca del Záncara, the first plant for obtaining garlic essential oil is located and the by-products obtained in the distillation process are valued, such as garlic paste, used in the manufacture of feed; hydrolates for use as a natural pesticide; or the manufacture of pellets from the skins of garlic husks for animal consumption.

In this framework for the launch of the agri-food cooperatives of Castilla-La Mancha, the Gold Badges have also been awarded by the Governing Council to personalities from the agri-food sector who have stood out for their professional careers and their links with the regional agri-food world. .

On this occasion, they fall on the former director of Castilla-La Mancha Agro-food Cooperatives, José Luis Rojas Sánchez; and Reinaldo de la Fuente, former Director of Labor and Immigration.

The I Cooperative Awards have had the collaboration of numerous regional entities that are committed to the development of agri-food cooperatives, including Globalcaja, Certifood, Fundación 'la Caixa' Santander, Netberry, Seguros RGA, BBVA, Artiz Ingeniería, Alvic, GlobalSuite, Bacosoft, EasyTech, Plus Comunica, Ateinge, Sabadell and Prevecam.

1 The detachment of the catenary on a train interrupts... 2 The first prize of the National Lottery leaves 60,000... 3 They encourage educational centers in Castilla-La... 4 Horse racing: “Hermès Baie is a crack”, declares... 5 Gracia Querejeta and Natalia Verbeke, 'Arcipriests... 6 Barça: signing Lewandowski is a 'possibility'... 7 Australian Prime Minister Scott Morrison leaves power... 8 Formula 1: Charles Leclerc takes another pole position... 9 Pilar Lamadrid, to the Medal Race of the European... 10 Review of 'Assassin's Game' (2021):... 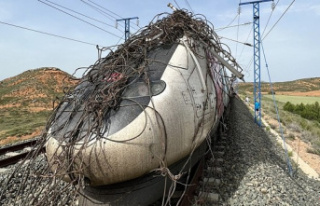 The detachment of the catenary on a train interrupts...