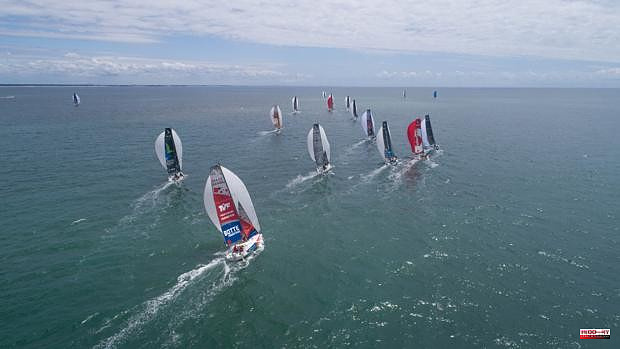 A Pro-Am regatta was held yesterday at Saint-Gilles-Croix-de-Vie over a twenty mile course between Saint-Gilles-Croix-de-Vie, Saint-Hilaire-de-Riez and Brétignolles-sur-Mer, in in which the crews in A Two were accompanied by fans, guests of the skippers and sponsors of the Sardindha Cup. And although this Vendée Pro-Am, held in ideal conditions in just over two hours, does not count for the final classification of the Sardinha Cup, it is clear that everyone wanted to shine in the Vendée waters, with a podium made up of three tandems, who do not hide their sporting ambitions for the event: Achille Nebout and Pierre Quiroga (Amarris-Primeo Energie) won ahead of Elodie Bonafous and Alexis Loison (Quéguiner-La Vie en Rose) and the duo Tom Laperche/Morgan Lagravière (Région Bretagne-CMB Performance).

"Tom (Laperche) and Morgan (Lagravière) explained a lot to us, it was very interesting. What I liked the most was the spinnaker, the boat glided well, it was a big change from the boat I'm sailing," he said Noa Geoffroy, from Le Havre, who sails a J80 and dreams of doing ocean racing "The start was nice because we were close to all the other boats, I learned a lot about foils and trim, I'm very happy because I wanted to discover the Figaro added Norah Le Baron, who is thinking of taking one of the training courses on the Figaro Beneteau circuit one day. In this sense, the Vendée Pro-Am will have played its role as a training regatta, the true DNA of the Sardinha Cup.

At 4:00 p.m. today, Monday, June 6, 2022, the start of the first stage of the Sardindha Cup began, starting at Cup Saint-Gilles-Croix-de-Vie and finishing at Figueira da Foz (Portugal). . A 565-mile route through the Bay of Biscay and a descent along the Galician and Portuguese coast, which will have its most complex part during navigation between the capes of Ortegal, Prior, Villano and Finisterre in the northwest of the Iberian Peninsula.

Showers, overcast skies and winds of 15 knots with gusts of 24 knots that will continue during this first day. As they say: "Until May 40, don't take off your coat"; although curiously at the time of starting the wind was rather light.

There was a first general call due to the many early starts at the time the referee blew the starting horn. In fact, the buoy boat was nearly boarded by the Figaro 3s.

After the valid start, the fleet headed for an unmarking mark located 1.7 miles to the south, which they had to leave on the starboard side and then head towards the island of Yeu, about twelve miles on the port side. . From that moment on, the fleet has already started the journey through the Bay of Biscay, some 370 miles to Cape Villano on the Galician “coast of death”.

In first position sails the duo Corentin Horeau – Villion Julien aboard the «Mutuelle Bleue» sailing at about 9.51 knots speed, followed by the «Smurfit Kappa – Kingspan» of Tom Dolan and Alan Roberts less than a mile away, «La Charente Maritime” by Alexis Thomas - Swann Hayewski, “Région Normandie” by Guillaume Pirouelle – Robin Follin and in fifth position the “Mercy Ships” by Victor D'Esur and Tiphaine Ragueneau out of a total of twenty-two crews.

1 The brothers Gustavo and Rafael del Castillo, champions... 2 Officials say dozens are dead in a 'Satanic"... 3 China rejects charges from Australia and Canada in... 4 South Africa's President is under investigation... 5 Formoso shows his disappointment after confirming... 6 Page announces that it will create the Transparency... 7 Closing in Villaseca the XXIV Benjamín La Sagra Football... 8 The driver of an electric scooter, injured in a collision... 9 Bordalás leaves elegant: «If Rafa Nadal does not... 10 Mexico's president's party wins 4 out of... 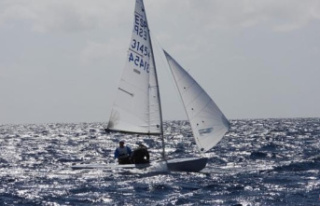