With the celebration of the closing day and awards ceremony of the XXIV Benjamin 'La Sagra' Football Championship, dean of the region, sports normality returned to its organization and celebration after the parenthesis of COVID-19, becoming Villaseca de la Sagra in the capital of national grassroots football, bringing together the best football schools in its already recognized national championship. 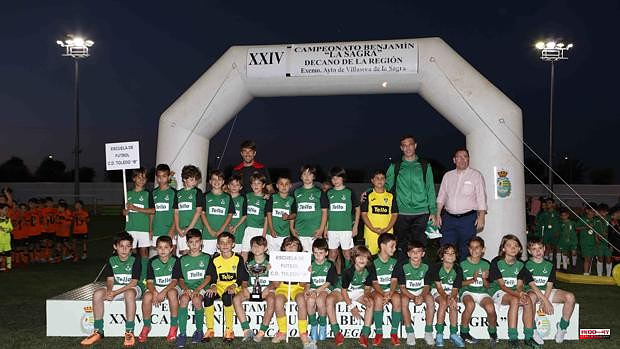 With the celebration of the closing day and awards ceremony of the XXIV Benjamin 'La Sagra' Football Championship, dean of the region, sports normality returned to its organization and celebration after the parenthesis of COVID-19, becoming Villaseca de la Sagra in the capital of national grassroots football, bringing together the best football schools in its already recognized national championship.

This year more than 3,000 people have gathered who enjoyed a final day of sports coexistence with about 550 children of benajmín age (8-9 years) from schools in the province of Toledo and the Community of Madrid.

The EFB Odelot Toletum has prevailed in the Final of the XXIV Benjamin 'La Sagra' Football Championship after winning an interesting and even final against the EF CD Toledo 'A' (2-1) in the final match of the closing day this Saturday in Villaseca de la Sagra organized by the town hall.

Both football schools reached the final after beating Argés City Council and Parla Escuela Fair Play from the Community of Madrid in semi-finals with great emotion and equality.

The third position was occupied by the Parla Escuela Fair Play, which was superior in said qualifying match to the Escuela del Ayuntamiento de Argés (4-0), which occupied the fourth qualifying position on the final podium in an excellent championship held.

In the final of the 'Fair Play League', the Villasequilla City Council team won in an exciting final against the Magán City Council, which was defeated after an absolutely hectic final by a score of (4-0) which was resolved in the final minutes. For the 3rd and 4th place that had to be decided in the penalty shootout when reaching regulation time with a draw (2-2), it was the Lominchar football school that after the penalty shootout with the Recas 'A' City Council achieved third place on the final podium.

At the closing ceremony following the commitment to women's football within its campaign 'Football as a school of life. Equality in football', the championship did not want to be less for its firm commitment to women's football having equality, it has awarded all the girls participating in the 'XIV Benjamin 'La Sagra' Football Championship in their respective schools.

The closing day served the City Council of Villaseca de la Sagra to honor Ginés Meléndez for his contribution to regional, national and international grassroots football as well as for the achievements achieved with the Spanish Football Team, who as godfather of the current edition of the Championship of Football Benjamin 'La Sagra'. The honoree said that “when the quarry is abandoned, football dies. Villaseca de la Sagra is an example of the work of the base that from its town hall is a commitment to the future and an example of promoting sport, especially football 8 with the important work it carries out with its Benjamin championship.

The former Spanish coach recalled all the triumphs related to the grassroots categories within his professional career for almost two decades coordinating the lower teams of Spain.

1 The driver of an electric scooter, injured in a collision... 2 Bordalás leaves elegant: «If Rafa Nadal does not... 3 Mexico's president's party wins 4 out of... 4 17 confirmed cases of monkeypox in the Canary Islands,... 5 Ukraine's leader: Russia searches for another... 6 Soccer player Luis Suárez surprises with his visit... 7 The King receives the credentials of six new ambassadors 8 A PSOE councilor aspires to an opposition in another... 9 The Minister of the Environment of the Dominican Republic,... 10 Pre-agreement between Russia and Turkey to unblock... 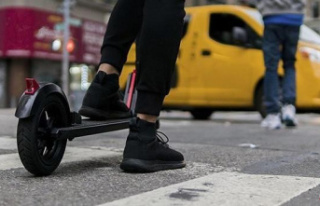 The driver of an electric scooter, injured in a collision...