The German Gunnar Biniasch, based in Fuerteventura, started the day ready to take the provisional first place of the Baleària WFSS Denia 2022 and the title of champion of the Spanish Cup, and he did so after finishing the first day in first provisional position. 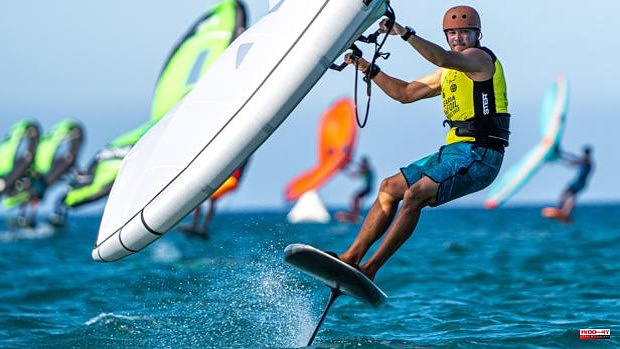 The German Gunnar Biniasch, based in Fuerteventura, started the day ready to take the provisional first place of the Baleària WFSS Denia 2022 and the title of champion of the Spanish Cup, and he did so after finishing the first day in first provisional position. The Canarian was followed by the Andalusian Yasser Chaib and the Alicante Pedro Simó. In the WetSuitCare Advanced class Regy Dils took the lead crossing the finish line first in all tests of the day.

The first day of the third Baleària WFSS 2022 regatta and, in addition, the Spanish Cup, started on the Dianense beach of Almadraba. In this well-known spot, the sailors jumped into the water around half past two in the afternoon after good wind conditions began to register with the rise of the thermal wind characteristic of this area.

Thus, the Principal Regatta Officer, Antonio Ordovás, was able to make the first start with a comfortable 10 knots on average. Again, and as usual since the beginning of the circuit, Biniasch did not give his rivals any respite at any time.

Already at the start, the North Foil sailor crossed the line speeding up the time to the maximum and placing himself at the head of the fleet from the first second. Thus, in the eight races held he finished in first place except in the second round where an error gave Yasser Chaib and Pedro Simó the opportunity to sign first and second place respectively, relegating Biniasch to third place. However, thanks to the fact that the minimum number of tests established to be able to discard a result from the classification were met, the Biniasch classification was not affected by this small setback.

The second place in the provisional classification went to Yasser Chaib, who began his participation in the Baleària Wing Foil Spain Series by placing himself 8 points behind the unbeatable Biniasch after finishing the day with one first place, five second places and two fourth places.

Just three points away from Chaib, Pedro Simó closed the provisional podium with a third place after achieving three second places, four third places and a fourth, to which the classification was discarded, thus remaining with eighteen points, three more than Chaib and eleven points behind Biniasch.

As for the WetSuitCare Advanced category, the Belgian from the Dénia Kitesurf Club, Regy Dils, repeated Biniasch's feat maintaining his leadership in the classification after achieving a full number of first places in the eight tests of the day. Behind him, fellow Belgian Pierre de Groodt was in second place a staggering sixteen points behind Dils after a series of errors led to a DNC in four races. Very close to de Groodt, just one point away, the Spaniard Enrique Rubio managed to finish the day in third place.

1 The "Urbania" begins the long regatta with... 2 “Quantum” achieved his fourth Rolex TP52 World... 3 Irene de Tomás, European champion of ILCA 4 4 Bale finds a team in the United States 5 Sánchez blames "the mafias" for the assault... 6 An electric scooter causes a fire in the La Victoria... 7 These are the winners of the Royal Academy of Fine... 8 Some 90,000 people participate in the Pride Barcelona... 9 Mojados dedicates a cultural week to Carlos V 10 Pedro Sánchez: «My Government is beaten by the economic... 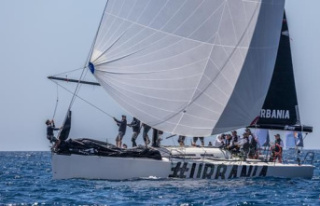 The "Urbania" begins the long regatta with...