Quantum Racing continues to fuel its legend as the best project in the history of the TP52 class. 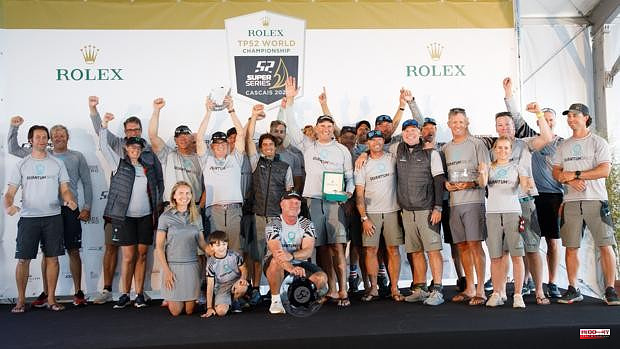 Quantum Racing continues to fuel its legend as the best project in the history of the TP52 class. Doug DeVos's sailboat won the Rolex TP52 World Championship today, marking his fourth wound since the 52 Super Series competition began. On the podium of the Clube Naval de Cascais he was accompanied by Harm Müller-Spreer's Platoon and Andrés Soriano's Alegre. The two heats played today in Cascais with spectacular wind and sea conditions were won by Quantum himself and by Turkish shipowner Ergin Imre's Provezza.

It has taken Quantum four years to continue fueling his World Champion stats. He also achieved his last Rolex TP52 World Championship wound in Cascais in 2018 and today he has once again inscribed his name in the history of the TP52 class by winning his fourth crown since the 52 Super Series (2014,16,18 and 22).

Platoon now has two titles, and today he had a regular day that almost cost him even second place in the general standings.

This is the first World Cup that Quantum has won with Doug DeVos taking full responsibility for the sailboat tiller. The point guard is usually a very happy man who transmits a very special chemistry between those around him, but today in Cascais he was even happier than on other occasions. He was not only the setter but also the helmsman and that has great merit. Next to him, the squire Terry Hutchinson hugged him after winning the championship. For the tactician, the joy is to see his boss succeed and be happy. Hutchinson, with today's, already holds 17 world titles in different classes of sailing.

For the American sailboat, the income it is amassing in the general classification of the 52 Super Series 2022 circuit is also very important. It has won the first two races of the season, Baiona and Cascais, and has a 14-point advantage over Platoon when there are still for competing in the Puerto Portals, Scarlino and Barcelona regattas.

Quantum cemented its championship in the first of two heats. Platoon started on the pin side in about 18 knots of wind and, as usual, Doug DeVos's boat did it from more conservative positions in the center of the starting line. In the first stages of the task, the German sailboat obtained a wide advantage over the Americans, putting up to five sailboats between them. However, the sailors led on the water by Terry Hutchinson did not lose patience and were recovering positions and starting to navigate the good side of the regatta field. A wind drop hurt the Germans and opened the door for Quantum.

Alegre was the third in contention in the sleeve and Andrés Soriano's men were about to pass the windward buoy first. However, Quantum pushed the layline to the maximum and was able to pass a few meters before the English rival to cross the top mark first with Platoon third. From then on, the Americans had absolute control over the fleet to ensure not only victory in the race but also the Rolex TP52 World Championship, since the incredible comeback of the Phoenix, which in Cascais has always gone from back to front, made that Platoon finished fourth with which the difference in the general, in the absence of the last test, was already six points, which made the German comeback almost impossible.

There was a spectacular last sleeve left with a Cascais at its best. Almost 20 knots of wind with an almost flat sea and above all knowing who was going to be the third on the podium. Phoenix and Alegre were going to play a single bullet for the remaining space in the drawer of the Clube Naval de Cascais.

The English came out perfect and leading the test from the pin. They made a very good climb with the free race course for them. They cleared the windward mark in first position and saw how Platoon got into a very expensive fight with Quantum, forcing them to take a penalty. At that time the second place on the podium was for Soriano. They went out to fight for the third rung and suddenly found the second. However, a poor first stern meant that both Provezza and Sled overtook her.

Platoon was lagging behind in eighth position in the regatta field and had to recover one more place to overtake Alegre in the general classification. And he did it thanks to Gladiator having to take a penalty at a junction with the Interlodge.

Javier de la Plaza, spinnaker trimmer for Platoon, said: “Today we had our chance to aim for everything in the first moto. We started very well, but just reaching the corner the wind dropped and it hurt us. From then on it was impossible to beat Quantum, although in the first stern we were close to achieving it. Then impossible. They are very solid. In the second we were there and we have penalized ourselves with the Quantum and they have sailed very well, very solid and we must congratulate them. We have not had the feeling that we could lose second place, but we also think about the boat that in this championship we have not arrived with the punch that is necessary to win it. Quantum has had it and won."

1 Irene de Tomás, European champion of ILCA 4 2 Bale finds a team in the United States 3 Sánchez blames "the mafias" for the assault... 4 An electric scooter causes a fire in the La Victoria... 5 These are the winners of the Royal Academy of Fine... 6 Some 90,000 people participate in the Pride Barcelona... 7 Mojados dedicates a cultural week to Carlos V 8 Pedro Sánchez: «My Government is beaten by the economic... 9 Warm farewell to teacher Mari Ángeles Delgado Barahona... 10 The singer-songwriter Nicolás Capelo dies at the... 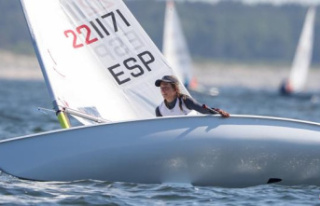