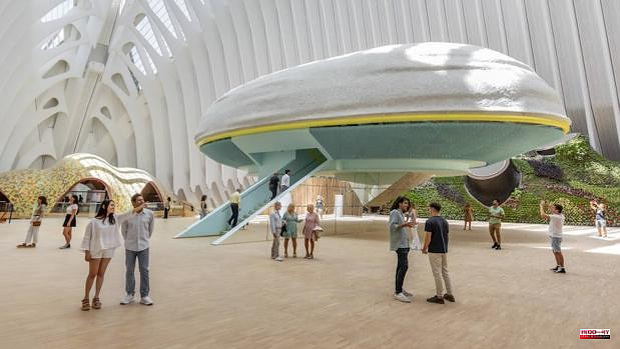 Barcelona, ​​Madrid, Tarragona, Lleida, Girona, Seville, Palma, Zaragoza… and Valencia. The artistic and cultural networks of the 'la Caixa' Foundation expand with a new CaixaForum, the ninth in Spain, which opens its doors this Wednesday in the Turia capital. The Ágora of the City of Arts and Sciences, the recognizable blue trencadís building that bears the signature of the architect Santiago Calatrava, has been converted into a new space that will house six exhibitions a year and that has two rooms for exhibitions, a restaurant , a vertical garden, an auditorium for 300 people and a bookstore.

The 'la Caixa' Foundation has presented to the media this Tuesday the final design of an enclave that has been described as "a door to culture".

A walk around the vicinity of the City of Arts and Sciences already showed that the enclave is ready to welcome visitors from this Wednesday. What's more, the bank has prepared a week of open doors (from June 22 to 30) for which there are no tickets left (they were free and sold out in a few days). It will be the beginning of a cultural and artistic life to which it is intended, according to the institution's forecasts, that more than 500,000 people attend each year. Valencia has been the last space in which the 'la Caixa' Foundation has deployed its cultural program, making the capital of the Turia the ninth city to have its CaixaForum definitively.

It was a challenge to convert the Ágora of the City of Arts and Sciences into CaixaForum Valencia. The architect in charge of taking the reins of the project has been Enric Ruiz-Geli, together with the Cloud 9 studio, they have had to design the interior of an open-plan building that did not have a defined use. So Ruiz-Geli created a “living space”, which he has filled with cells, a cloud, a vertical garden, an area to rest and even with the administration offices open to the public. «It has been a project in which to design a building without making the building. Build your landscape. For me it has been a dream within a dream”, assured the person in charge of the design, who has recounted that before starting the work he spent five hours alone inside the Calatrava building.

In the end, CaixaForum Valencia has 10,000 square meters dedicated to art, culture, scientific dissemination and education. As is customary in the rest of the centers that the Foundation has throughout Spain, the new location will host exhibitions from spaces such as the British Museum, the Center Pompidou, the Cinémathèque Française and the Prado Museum, among others.

The works to convert the Ágora into CaixaForum Valencia began on March 1, 2020. Just a few days after the workers and the billboards took over the space, the health crisis caused by Covid-19 forced the work to stop. However, a little more than 20 days later they were resumed, which has led up to now, to open its doors two years after starting the works.

Although CaixaForum Valencia will host six exhibitions a year, it has opened with three proposals that navigate, as explained by the deputy director general of the 'la Caixa' Foundation, Elisa Durán, "between the past, the present and the future". In this way, the first sample arrives from the British Museum. 'Pharaoh. King of Egypt', an exhibition that will allow visitors to travel from the year 3,000 a. C. to the year 30 a. C. The so-called lords of the Two Lands are presented in this exhibition where the symbolism and ideology of the Egyptian monarchy are explored, where the stories of the 137 pieces that make up the exhibition are revealed. Thus, among the works of the British art gallery that are presented are the 'Head of Pharaoh Tutmosis III'; the statue of the god Re-Horathky; a sculpture of the head of Alexander the Great; and a fragment of the lid of the sarcophagus of Pharaoh Rameses IV, among others.

Likewise, the banking entity opens its artistic collections to show visitors the proposal 'Horizonte ylimit. Visions of the landscape', an exciting exhibition that thanks to names like Courbet, Miró, Bleda and Rosa, Anglada-Camarasa or Perejaume, among others, delves into the landscape as a representation of nature over the last two centuries.

Finally, from the future and one of the most significant spaces built in the Ágora, the cloud, the exhibition 'Educating in the era of artificial intelligence' has been installed, a project that delves into an interactive tour of the opportunities and risks of this type of technology. Through panels, the viewer will be able to learn about six research projects on artificial intelligence.

In addition to the exhibitions, CaixaForum Valencia has prepared a cultural proposal with concerts and conferences. It kicks off on June 30 with 'Summer Night'. It is an accidental poetic performance inspired by an imaginary encounter between two illusionist poets, two friends, two teachers: Joan Miró and Joan Brossa. Brossa and Miró take shape through the actresses Pi Piquer and Rossy de Palma in a playful and expressionist attempt at illustrated Dadaism. Likewise, the Foundation has commissioned the artists Anna Talens and Inma Femenía for two works of art that crown both the interior and the exterior lake that floods the Ágora.

The official inauguration of CaixaForum Valencia took place this Tuesday in a ceremony attended by the president of the 'la Caixa' Foundation, Isidro Fainé; the president of the Generalitat Valenciana, Ximo Puig; the mayor of Valencia, Joan Ribó; and other authorities of the political, economic and cultural life of the Valencian Community.

1 The premiere of 'Lightyear', between controversies... 2 'Las supplicantes', a story of dignity that... 3 The Canary Islands continue to climb with 2,493 new... 4 The shocking image of a civil guard who plays it to... 5 Full house in the first summer camp of the Sports... 6 The incidence of Covid to fourteen days grows 17%... 7 The former CiU senator and former regional deputy... 8 Dismantled a plot of false housing rentals after a... 9 The Valladolid Provincial Council approves a three... 10 Mazón: "The fight for respect for diversity... 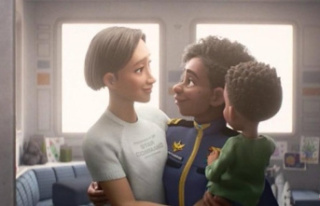 The premiere of 'Lightyear', between controversies...