Where is Lester Lescay?: Cuban athletics is bleeding 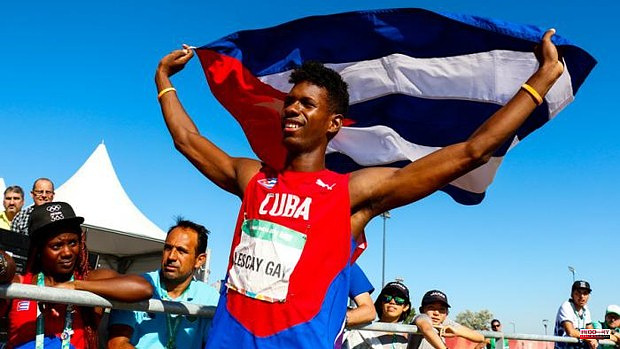 Alberto Juantorena always said the same thing: «They decided to leave. It's their problem." The lack of freedom in Cuba continues to bleed its athletics team, converted into a huge talent factory that destroys what it creates, a Saturn that devours its own children, barely standing out in international competition. Spain and Portugal are the two nations that are benefiting the most from the exodus of elite athletes from the island, from that news that has been perpetuated for decades and always ends with the same phrase: in this or that trip to a competition in the abroad, "athlete X left the Cuban delegation."

Lester Lescay is the latest talent who has decided to settle in Spain.

An enigmatic case. Lescay, an athlete with tremendous potential, only 20 years old and already accredited with 8.28 meters in the long jump. He left the Cuban team at the beginning of March after a competition in Belgrade and has not been heard from since.

In athletic circles it is said that Lester Lescay, originally from Santiago de Cuba, is in Spain. It is also said that it will not take long for him to obtain nationality, although perhaps not as quickly as triple jumper Jordán Díaz. Lescay has been seen in Castellón, he signed up for the international rally in Ibiza on May 7, but then mysteriously disappeared from the lists of participating athletes. It is quite a metaphor, a symbol of this growing exodus of Cuban talent: they leave the Cuban team, become invisible for a while, compete again and finally reach the new nationality.

The reality is that Lester Lescay has not yet debuted in the 2022 season, which in athletics is called the open air as opposed to the indoor track, which is held in winter. The young talent from Santiago does not seem to be in a hurry. His nationalization is not urgent either since he will not be able to compete in the Paris 24 Games for having competed in the Tokyo Games last year and it will take more than three years to change teams. Lescay will have to wait until 2025, in the World Cups that are rumored to take place in Kenya.

The nationalizations of Cuban athletes have become much more organized and planned than in the past. Before they required a lot of time, as in the cases of Méliz, Lino or Ortega, some of them married, with children, and who had to wait years to be able to wear the Spanish national shirt. Currently it is about very well designed processes, with contracts involved, with the intervention of agents, sports equipment companies and contacts at the highest political-sports level. "I don't know if these procedures are the most correct -says the prestigious jumping coach Juan Carlos Álvarez-, but what I am clear about is that this is going to go further because we are witnessing another dynamic and there are many international championships outside of Cuba" . Everything indicates that Lescay will not be the last.

Jordán Díaz has been the most recent and largest case. Already nationalized Spanish, he is becoming the great rumor of world athletics. It is about a triple jumper called to scare the world record, the untouchable 18.29 meters of the Englishman Jonathan Edwards who are on their way to turning three decades. Díaz jumped 17.49 at the age of 18 and is one of those athletes that athletics awaits calmly, with the certainty that one day he will achieve something immense, which will not surprise anyone. He trains under the orders of Iván Pedroso, another great name in the history of jumping. Pedroso, from Havana, is the man who directs the career of Rojas and Peleteiro, medalists in the last Olympic Games. Guadalajara has become an extension of athletic Cuba, the natural exile of Caribbean jumpers from Alcarria.

In Spanish athletics, not everyone sees these express nationalizations with good eyes. Antonio Corgos, a man who needs no introduction because he jumped 8.23 ​​meters more than 40 years ago, points out: “From a humanitarian point of view it is clear that Cuban athletes have the right to earn a living. I am not opposed to that. Now, at a sporting level this should be better normalized, make everything more progressive. What is happening is an excess.” He refers especially to the case of Jordán: «It is that he arrived, and suddenly, he already had the record for Spain and won a medal in a national championship... I don't know if they contribute much, because sometimes they are isolated, in groups outside the structure of the Spanish Federation. I believe that it would be necessary to demand more time to stay here. Nationalize so quickly and in a few days have the record for Spain... what's the point of that? I don't think it was very funny for the one who had the record," says Corgos, who adds that "the impact on Spanish athletes can be hard, sometimes it can mean that you lose a place in the national team."

Carlota Castrejana, European triple jump champion, is less critical of these nationalizations, perhaps because she has had great Cuban jumpers such as Joan Lino or Luis Méliz as training partners. «Cubans have contributed a lot to me, not only on a technical level but also on a personal, human level: I learned a lot from them -highlights Carlota, in turn former vice president of the Spanish Federation- and I think they have enriched the daily life of many athletes like me. Niurka Montalvo, also of Cuban origin and world champion in 1999, was a great source of advice for Castrejana. «Niurka taught me a lot, in general the Cuban style has been very valuable to me. They are cordial, very generous, I think there has been a great exchange of knowledge on both sides, in both directions: Cuban-Spanish and Spanish-Cuban », concludes Carlota, a lawyer and currently in the process of changing her professional career.

Ramón Cid, national coach until 2018, has an intermediate vision. «I see a positive and a negative part in this of the Cubans. The first thing is the human part, each one looks for his future, his boat, 'with my athletic marks, if I can, I earn a living' they think, with all legitimacy. Be careful, they leave their family there, they leave everything. That is very respectable, because Cubans are very Cuban, very much into their music, their neighborhood and their chair at the door of the house. It is not easy to leave all that.

Cid adds that this arrival of Cuban talents can affect athletes born in Spain. «Man, they bring you the best in the world, as if it were a parachutist who falls here suddenly. What a grace you have to do if you are the champion of Spain! This can take away your chance of being an Olympian… I don't know, Jordan's nationalization was very fast, it was greatly accelerated in an exaggerated way. But, of course, this gives more medals to Spain. How to see it? Is it an encouragement? is it a lock? I don't know very well, I don't know where to put the faithful of the balance, "concludes Ramón, current coach of María Vicente.

Portugal has also benefited from the desire of Cuban athletes for a better life, with more freedom and future well-being. The Olympic gold of last summer achieved by Pedro Pichardo (an athlete of 18.08 in triple) has also had its controversy because Pichardo is an island within Portuguese athletics. The hurdler Iribarne, the sprinter Gandulla, ... athletes who give shine to the neighboring country but who come from the inexhaustible mine of Cuban talent and its excellent technical school. In Spain, Lester Lescay is the latest case, a case that still floats in the cloud of enigma, in the months prior to his nationalization. Lescay will compete without a national team for a while, but with the dream of reaching future medals and perhaps with the 8.56 meters, Yago Lamela's Spanish record, in the spotlight.

1 Atlético finishes third and Villarreal will play... 2 Life sentence for the Russian soldier who killed a... 3 Two Spanish sisters are murdered in Pakistan to "wash... 4 Biden warns that the US will respond militarily if... 5 Turn of the screw in Afghanistan: TV presenters forced... 6 Language and identity: the other war in Ukraine 7 The war in Ukraine, live | Life sentence for the Russian... 8 UN visits Xinjiang to investigate allegations of 'genocide' 9 Colombia, a campaign closure full of unknowns 10 Maduro demands to release his wife's nephew to... 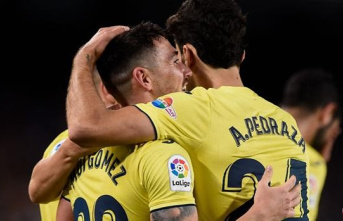