The president of the PP, Alberto Núñez Feijóo, has chaired this Monday the Steering Committee of his party, in the final stretch of the regional election campaign, with all the polls coinciding in a possible large majority of Juanma Moreno. 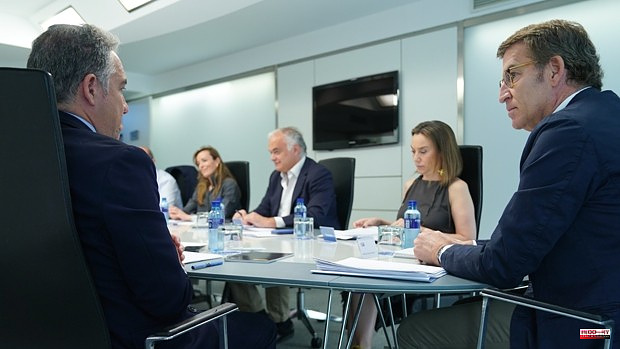 The president of the PP, Alberto Núñez Feijóo, has chaired this Monday the Steering Committee of his party, in the final stretch of the regional election campaign, with all the polls coinciding in a possible large majority of Juanma Moreno. After the meeting, the PP has announced that within a month it will send its proposal to the Government to renew the constitutional bodies, including the General Council of the Judiciary, with the condition that a regeneration and a reform of the Justice is included. In addition, he has announced that this week he will send the Executive and the parliamentary groups a document with a "Toledo Pact on Defense and National Security Policy", to have it ready before the NATO summit.

The Deputy Secretary for Institutional Policy, Esteban González Pons, has appeared after the Committee before the press, and has shown the satisfaction of the PP for the work done in the Andalusian campaign: "We are getting the message that Andalusia needs stability, moderation, good sense, think about the economy and employment, and unity around President Juanma Moreno".

"In 2019, the PP was facing the PSOE, in these elections, the PP is facing abstention. We do not give any votes for won, and we do not give any votes for lost. Now that it seems that it is clear who is going to govern, that is decided on Sunday is how he is going to govern", he commented. "We ask the voters for a clear and unequivocal mandate, in the sense that Juanma Moreno should govern alone, without depending on any other force that conditions her government."

In the Management Committee, the PP has talked about foreign policy, and in particular about a State pact on Defense policy that it is going to offer to the Government and the rest of the political forces. "We thought that economic policy was the most damaging to Spain's interests, but foreign policy has tied it." "Sánchez works against the international prestige of Spain. He has achieved the miracle of putting Morocco and Algeria in agreement that Spain has a weak government that cannot be trusted."

"We are diplomatically at the mercy of Algeria and Morocco at the same time, it had never happened," González Pons stressed.

In this framework, "out of responsibility", the PP makes a proposal for a pact on defense and security. "It is a Toledo Pact on the security and defense of our country. We offer the pact to the Government of Spain and also to the rest of the parliamentary forces." Throughout the week, the Government and the groups will receive the document in which we defend that the defense policy is not partisan, and does not depend on the Government's partners. "That before the next NATO summit we send a message to the world that Spain is a reliable partner".

The PP includes the rest of the political forces, beyond the PSOE, to sign together a "Toledo Pact for national defense". Among the points, two stand out: before the next NATO summit, "we are going to ask them to unite to ask NATO for a guarantee of protection of the entire national territory, in particular non-peninsular territories." "Let the defense of the southern border of the EU be taken into account."

They also propose that a stronger collaboration with North African countries be defined. "A larger NATO is not only a military pact but it is also a political pact. NATO does not defend countries, but political principles."

In this pact, the PP demands a parallel declaration in which it is recognized that NATO defends the territorial integrity of its members, and that its strategic objectives include the defense of the southern border of the EU, strengthening the relationship with the countries of Asia Pacific, but also in the Euro-Mediterranean area with the countries of North Africa.

The pact will be sent to the Government and the parliamentary groups this week. The document is practically finished. There is no deadline, "but it would be sensible and good if we could offer that image to the NATO partners when they arrive in Madrid. It would be good for the prestige of Spain."

Regarding the General Council of the Judiciary, the PP will send the Government a document on the negotiation next month: "We are willing to renew, but we cannot do it if there is no regeneration and reform."

"Next month, or before the end of that month, the PP will send the Government a proposal for the renewal of the constitutional bodies, the reform of Justice and the regeneration of Justice. Renewal, reform and regeneration. We believe that the mandate Constitution must be fulfilled, we believe that the constitutional bodies must be renewed, but the situation is so serious that a simple renewal is no longer enough. In the negotiation there must be publicity, reforms so that this situation does not happen again and there is a commitment to the regeneration of Justice policy in our country".

The PP reform proposals will be based on what the associations of judges and prosecutors have exposed. "This requires transparency, recognizing that we have not done things well, the Government must accept that it was wrong to remove powers from the CGPJ and it will be necessary to regenerate the Justice policy." "With light and stenographers".

"If the Government unilaterally appoints the magistrates of the Constitutional Court, breaking the Constitution, there would be consequences for the European Union," González Pons warned, referring to the possibility that the Executive choose those two magistrates that correspond to it, without complying with the rule constitutional right to approve the renewal by thirds. In his opinion, it is a very risky step from the constitutional point of view.

1 The PP of Madrid transfers the contracts of Ábalos... 2 Tanxugueiras, Xabi Aburruzaga and Septeto Santiaguero... 3 They capture a driver who was traveling at 169 kilometers... 4 Two children intoxicated after the fire in an abandoned... 5 Salvini fiasco in the referendum on justice in Italy:... 6 The second strike of the 'contact center'... 7 The birth rate registers historical lows in the Basque... 8 Families who will have free textbooks next year go... 9 María Raboso, Alba Espejo and Rocío Vaquero, Queens... 10 The “tsunami” of the coronavirus caused the number... 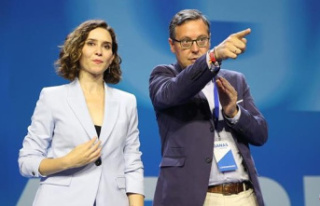 The PP of Madrid transfers the contracts of Ábalos...