The Archbishopric of Toledo presented this Monday the Economic Report for 2021, a year that was marked by the effects of the pandemic and in which the number of people served by Cáritas Diocesana increased, which were directly 21,176. 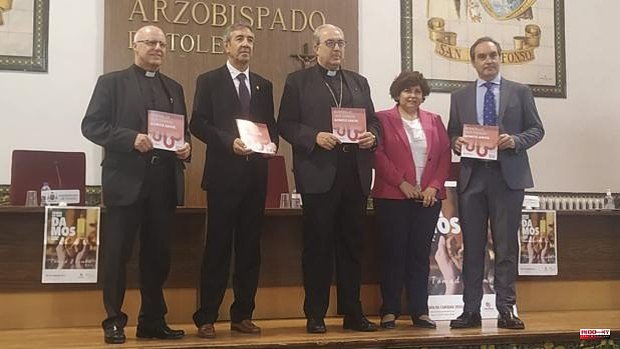 The Archbishopric of Toledo presented this Monday the Economic Report for 2021, a year that was marked by the effects of the pandemic and in which the number of people served by Cáritas Diocesana increased, which were directly 21,176. In addition, another 67,972 people benefited.

It is about "concrete data and that highlights the important work that is carried out through the different agents: priests, volunteers, workers, partners, donors...", said the auxiliary bishop of Toledo, Francisco César García Magán, from the Council Hall, noting that last year was also "marked by the change in the institution's management team."

García Magán considers that the coronavirus "has forced us all to adapt to the new realities and that it has accentuated new forms of poverty such as addictions, promoting the 'Lázaro Project', or violence against women, consolidating 'Break your Silence', or the accompaniment program for migrants, such as 'Caritas Integra'».

Meanwhile, the director of Cáritas Diocesana de Toledo, José Luis González, has stated that the Economic Report "reflects the reality of the entity's work in 2021, showing an x-ray of the social action of Cáritas, both from the General Services and from the 137 Cáritas Parroquiales and two interparishes that exist in the Archdiocese of Toledo (in Talavera de la Reina and in Seseña)». "This memory is a memory of gratitude to 1,168 volunteers and 92 workers who are called to transform society through love," he added.

González has described the coronavirus crisis as a “tsunami”. In fact, of the 21,176 people who were attended directly, the vast majority (18,840) were through the Territory Animation Area, which collects the accompaniment and care in the Parish Caritas of the Archdiocese of Toledo. And those 18,840 people served were more than double those of 2020, when 8,264 asked for help.

«New forms of poverty have been accentuated, such as precarious employment (with more precarious salaries and more instability), the digital divide, the difficulty of accessing housing and paying rent and utilities, and the number of people migrants who have come to Cáritas”, explained its director.

- The network of Commissaries of the 'COR_IESU Project' has been completed, which has had the collaboration of la Caixa. In total, there are 17 stores, in which more than 1,000 families in the Archdiocese of Toledo can be served directly and some 3,000 people indirectly. Last year ten stores were created in Oropesa, Villacañas, Sonseca, Seseña, Yuncos, Mora, Valmojado, Consuegra, Ocaña and Madridejos.

- The families participating in the projects of the Family Area were already in a situation of vulnerability even before the crisis, with which the situation has now worsened further and, in many cases, they have become in a situation of social exclusion . In total, 256 people benefited directly and 539 indirectly.

- The Inclusion Area has increased the number of social emergency shelters to respond to migrants who arrived without resources and without the possibility of accessing housing. Now there are four (three in Toledo and one in Talavera). The migrants came, above all, from Latin America (from countries such as Venezuela, Peru, Colombia or El Salvador). In total, 63 people benefited. Likewise, through the 'Caritas Integra' program, which accompanies migrants, 585 people were directly assisted and 1,463 people benefited.

- Regarding employment, last year seven training actions were carried out in which 78 people participated, while 761 people passed through the Labor Orientation services. Thus, Cáritas has job orientation technicians in Toledo, Talavera de la Reina, Illescas and Torrijos, who made it possible for 45 people to access the job market.

- The number of homeless people who passed through the different centers managed by the Archdiocese was reduced by half: from 1,072 in 2020 to 539 last year. This is because with the coronavirus the figure of transients is disappearing and people who are in shelters are spending more time in order to rebuild their lives.

- Inserta Toledo, the first insertion company in the province of Toledo, managed 908,305 kilos of used clothing, 28.2 percent more than in 2020, which means approaching levels before the pandemic. The collection was through the 156 red containers for the selective collection of textile waste (12 more than in 2020). In addition, the company closed the year with 14 people hired, of which eight are "insertion workers" who were derived from Social Services.

- Regarding 'Hogar 2000', which began in 2021 with an outbreak of coronavirus with mild symptoms and normality in the center, it attended 34 people.

- Regarding the different support and accompaniment projects for women, the 'Mater, say yes to life', assisted 37 people; 'Rompe tu Silencio', accompanying women victims of violence and their children, accompanied 116 people directly; and the 'Santa Marta Project', accompanying women who want to leave the context of prostitution, had 12 women.

- Campaigns were also launched from Toledo to help persecuted Christians in Syria and in August 2021 a response was given to the call from Cáritas Española to help the thousands of victims affected by the earthquake of magnitude 7.2 on the Richter scale. that hit southwestern Haiti.

For his part, the administrator of Cáritas Diocesana de Toledo, Ramón Martín, explained that 4.39 million euros were allocated to respond to different forms of poverty, such as the lack of basic needs, women victims of abortion, violence towards women and their children, lack of or precarious employment, drug addiction, homelessness or spiritual poverty. Last year there were 645 members and 2,429 donors.

The program with the highest investment is the Animation of the Territory (Reception and Assistance), with 895,000 euros, a program that covers basic needs in food and supplies. Meanwhile, for Hogar 2000, 767,808 euros were reserved; for Homeless People, 516,842 euros; and for Employment, 507,000 euros. Likewise, the program where the projects related to women are found has involved an investment of 181,921 euros; 156,808 euros were allocated to the migrant accompaniment program; and the housing program, 150,717 euros (these two programs had more investment due to the fact that homelessness and immigration increased).

On the other hand, from Cáritas Diocesana de Toledo (without taking into account the data from the Cáritas Parroquiales) 485,830 euros were delivered for aid, that is, 125,830 euros more than in 2020. According to the administrator «this aid translates into rent payments , food, school support, payment of supplies, medicines, transportation, among others».

52 percent of the revenue came from private funding sources and the remaining 48 percent from public funding. "Since 2017, the financing trend in Cáritas is that private financing has the greatest weight in total financing, with contributions from donors, the Church, companies, legacies and campaigns," Ramón said. Martín, who thanks all the companies, parishes, associations, partners and donors who join in participating, building, belonging to a large human group of people actively involved in building the common good.

Finally, the administrator has encouraged financial collaboration with Cáritas Diocesana de Toledo in the Campaign

1 Caritas warns that the "new poor is a middle... 2 Sexist violence in the Canary Islands rises 8% in... 3 Pedro Palomo: «Family businesses are the lifeblood... 4 Dismantled a human trafficking network on the border... 5 Alert: The DGT starts a control campaign in the province... 6 The patios of Toledo once again show their splendor... 7 Sixteen years in prison for the marriage that forced... 8 Justice asks to modify the Valencian law to include... 9 Treasury accounts to test the viability of the transport... 10 The Ibex deepens its collapse and the risk premium... 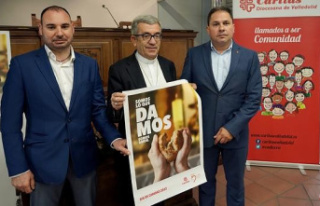 Caritas warns that the "new poor is a middle...