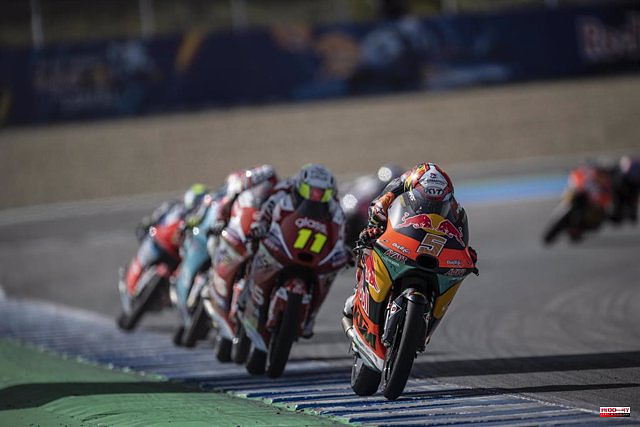 The Spanish rider Jaume Masià (KTM) has achieved victory in the frenetic Moto3 race of the French Grand Prix, which had to be restarted after the rain made its appearance at the Le Mans Circuit, and has risen to second place in the championship, only behind his compatriot Sergio García Dols (GasGas), who finished seventh.

In a superb last lap, the man from Algemesí held his position against the Japanese Ayumu Sasaki (Husqvarna), who came to take the lead from him in one of the last corners, to achieve his sixth win in the World Championship and the second of the year after the one achieved at the Grand Prix of the Americas.

The Japanese finished second ahead of Majorcan Izan Guevara (GasGas), who was able to recover from his crash in the first race to reserve a place on the podium. His teammate Sergio García Dols also recovered in the relaunch of the test, who with his seventh place retains the lead (112) with a 17-point advantage over Masià and the Italian Dennis Foggia (Honda), fourth this Sunday.

In the opening day of racing at Le Mans, Brazilian Diogo Moreira (KTM) took command of the race after the lights went out, while poleman Foggia fell to fourth place. The water began to fall on the Gallic layout and chaos soon broke out.

The first to fall were the two riders from the Gaviota GasGas Aspar Team, the leader Sergio García Dols and Izan Guevara, but after them another ten riders also succumbed to the humidity on the track, which caused the red flag.

The frenetic activity in the garages allowed the test to be relaunched minutes later at 14 laps and already dry, and once again Moreira did not miss the opportunity to take the lead at the start. Foggia regained the privileged position, but in just two laps, Masià managed to overtake him.

The Valencian's position was only in danger four laps from the end, when he went a bit wide and was overtaken by the transalpine and by Sasaki, although he soon returned the pass. With cold blood, he withstood the attacks of the Japanese in the final lap, and gritted his teeth to sign his second victory of the year.

1 Atlético hurries for the runner-up against a downcast... 2 Getafe and Barça fight for an insurance point 3 Of the runners, of the speeds 4 Real Madrid continues its set-up against a Cádiz... 5 Araújo does not travel to Getafe as a precaution 6 Finnish President and Prime Minister announce application... 7 The price of electricity falls 33% this Sunday and... 8 Loquillo: open 24 hours 9 10 The government of Rueda: keeps all the councilors... 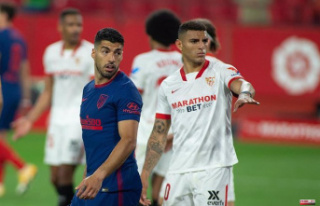 Atlético hurries for the runner-up against a downcast...