With one of the greatest comebacks in history, American golfer Justin Thomas won his second PGA Championship title this Sunday in the final playoff, after Chilean Mito Pereira let this Grand Slam title slip away on the last hole. 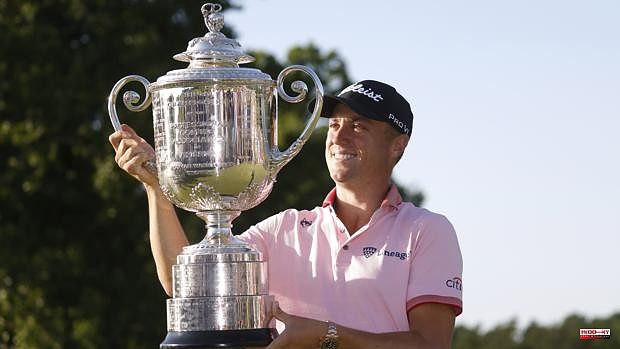 With one of the greatest comebacks in history, American golfer Justin Thomas won his second PGA Championship title this Sunday in the final playoff, after Chilean Mito Pereira let this Grand Slam title slip away on the last hole.

Thomas defeated countryman Will Zalatoris in the three-hole playoff at Southern Hills (Tulsa, Oklahoma) to clinch his 15th PGA title and second Grand Slam title, after the 2017 PGA Championship.

The 29-year-old American had started the last round in seventh place in the table, seven shots off the lead, and ended up achieving the third-biggest comeback in Grand Slam history.

"It was a very strange day," acknowledged Thomas, who finished with a cumulative 275 strokes, five under par. "I was asked earlier in the week which leadership would be safe, and I said none. This place is very hard », he pointed out. “But I was very patient. I still don't believe I was capable of winning the playoff."

The American was quickly congratulated by his great friend Tiger Woods, who retired from Southern Hills on Saturday after starring in one of the worst days of his legendary career. “Many congratulations to Justin Thomas! He stayed in this championship until the end and once he found the beat of it, he didn't look back," Tiger said on Twitter.

At 46 years old, Woods was one of the many illustrious victims of the harshness of this tournament, the second he had played since the car accident in 2021 that caused serious injuries to his right leg.

This PGA Championship will go down in history both for the abandonment of Tiger, his first as a professional in a Grand Slam, and for the cruel outcome experienced by the Chilean Guillermo 'Mito' Pereira, staying one step away from inscribing his name in Olympus of Latin American golf.

After three solid rounds, Pereira started the final day as the surprising leader of the tournament with a three shot advantage. Very few expected to see a semi-unknown player like the Chilean in that position, who was playing just his second Grand Slam tournament after the 2019 United States Open, in which he did not make the cut.

The 27-year-old golfer from Santiago has been a full member of the PGA since this season and had been looking for his first trophy in the shadow of his compatriot and childhood friend Joaquín Niemann, the first Chilean to win a title on the circuit.

Despite his inexperience in these situations, Pereira knew how to withstand the pressure during his last round, responding to each attack from his pursuers.

Pereira was overtaken at the top of the table at various times by Zalatoris and the American Cameron Young, but he maintained his lead when he reached his penultimate hole, when Thomas had already finished his round.

Competing against himself, Pereira was inches away from sealing a birdie on the 17th hole that would have spared him the drama that came on the last.

Needing only a par hole to give Chile its first Grand Slam trophy, Pereira collapsed by sending his tee shot into the water. The Chilean ended up committing a double bogey that dropped him to third position, shared with Young, with a final card of 75 shots (5).

"It's hard to end like this. She had played very well all week », he lamented later. "You have so much pressure on your body that maybe you don't even know what you're doing," she said of her latest hole. "I was very nervous. It was sad to send the blow to the water. I wish I could do it again."

Pereira thus remained on the verge of being the first Latin American to win the PGA Championship and the third to lift a Grand Slam after the Argentines Roberto de Vicenzo, at the British Open in 1967, and Ángel Cabrera, at the United States Open. States of 2007 and the Augusta Masters of 2009.

The Pereira debacle left the title on the line in a three-hole playoff between Thomas Zalatoris, who was also seeking his first PGA trophy.

Thomas put his experience to good use in a playoff that both started with birdies on the 13th hole. On the 17th Thomas took the lead with his second birdie and on the 18th, the most difficult on the course, he sealed the victory when both finished it even.

The American achieved the biggest comeback of the 104 editions of this tournament and the third in the history of the Grand Slam.

The other favorites for the title fell off during the tournament. The world number one, the American Scottie Scheffler, did not make the cut on Friday, and the number two, the Spanish Jon Rahm, concluded with an accumulated 286 strokes (6) in 48th place.

1 Curry leaves the Warriors one step away from the final 2 Lanzarote returns with enthusiasm to the European... 3 Alpine CEO sows doubts about Alonso's future 4 Mbappé's house in Madrid, the power of his mother... 5 Where is Lester Lescay?: Cuban athletics is bleeding 6 Atlético finishes third and Villarreal will play... 7 Life sentence for the Russian soldier who killed a... 8 Two Spanish sisters are murdered in Pakistan to "wash... 9 Biden warns that the US will respond militarily if... 10 Turn of the screw in Afghanistan: TV presenters forced... 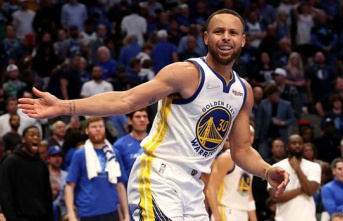 Curry leaves the Warriors one step away from the final