His Majesty King Felipe VI has received this Tuesday a hot bath of crowds during his visit to Ponferrada, where hundreds of people have crowded into the Plaza del Ayuntamiento to greet the monarch at his entrance to the Consistory. 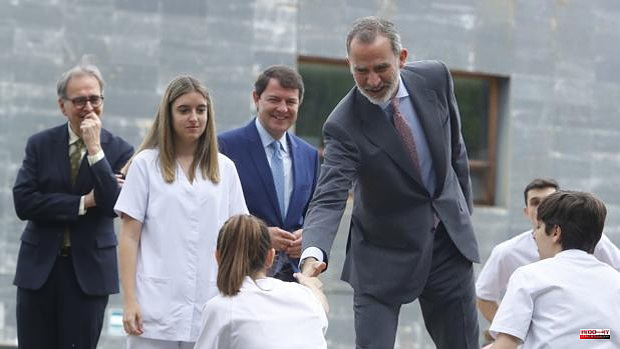 His Majesty King Felipe VI has received this Tuesday a hot bath of crowds during his visit to Ponferrada, where hundreds of people have crowded into the Plaza del Ayuntamiento to greet the monarch at his entrance to the Consistory. Between applause and cheers for the Crown and accompanied, among others, by the Minister of Universities, Joan Subirats, and by the President of the Board, Alfonso Fernández Mañueco, Felipe VI came to shake hands with those gathered before stamping his rubric in the Book of Honor of the Consistory.

Previously, the monarch presided over the closing ceremony for the 25th anniversary of the Ponferrada Campus of the University of León (ULE). During his visit to the university facilities in the capital of Berciana, the King had the opportunity to visit the new Podiatry Clinic, after starring in a family photo in which the mayor of Ponferrada, Olegario Ramón, or the president of the Cortes, Carlos Pollan.

Next, the monarch was made aware of the knowledge transfer projects from the Campus to companies in the forestry sector. These works try to boost the poplar value chain, through the use of new technologies capable of creating digital twins. Specifically, Felipe VI has been informed of the development of the mobile applications Chopo 4D and ChopoAlert, created by the company Bosques y Ríos.

Before presiding over the solemn ceremony that took place in the auditorium, the King was also able to greet the students of the Physiotherapy and Nursing degrees and pose, along with the rest of the entourage, before the new sculptures carved by the Leonese Amancio González from chestnut roots.

During the ceremony, the rector of the ULE, Juan Francisco García Marín, thanked the monarch for the "honor" of having his presence at the 25th anniversary events and valued his visit as "support for the entire Bierzo region », informs Ical.

Once the events on the Campus were over, the King went to the Plaza del Ayuntamiento in the capital of Berciana, where hundreds of people were waiting to greet him. With Spanish flags on the balconies and with the students of the IES Gil y Carrasco leaning out of windows and glass, the monarch has completed the marked route approaching to greet some of the attendees, a gesture that was also carried out by the president of the Board .

After his departure, the mayor of Ponferrada, Olegario Ramón, thanked the monarch for his visit, whose last presence in the city dates back more than 25 years ago, when he was still Prince. .

The presence of Felipe VI in the academic event and his visit to the Town Hall gathered in Ponferrada a large representation of the society of the region, the province and the Community. Among the authorities, the figures of the Government delegate in Castilla y León, Virginia Barcones, the president of the León Provincial Council, Eduardo Morán, or the president of the Bierzo County Council, Gerardo Álvarez Courel, stood out.

1 Six years in prison for a man in Burgos for abusing... 2 Chef Ferran Adrià predicts the next challenges for... 3 Canarian teachers confirm the ineffectiveness of the... 4 This is how Rafa Nadal trains mental strength 5 An agent of the National Police saves a man who bled... 6 Dmitrenko denies being a spy and assures before the... 7 Spanish researchers build a building that is proof... 8 Residencial Kings, where reconciling work and personal... 9 Gilmar, the best option to find the house of your... 10 An exhibition celebrates the 30th anniversary of the... 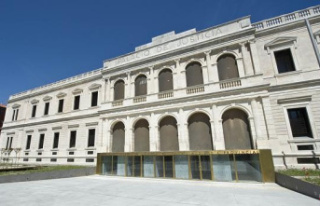 Six years in prison for a man in Burgos for abusing...