Overturn in the general after the dispute of the second day of regattas in the waters of Sanxenxo. 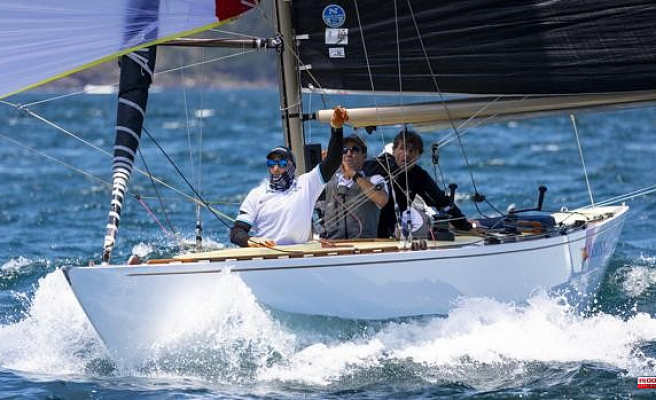 Overturn in the general after the dispute of the second day of regattas in the waters of Sanxenxo. This Saturday, the 6 Meter fleet completed the third and fourth heat of the seventh edition of the Rey Juan Carlos El Corte Inglés Master Regatta, an event that is also serving as an important warm-up for the Xacobeo 6mR Worlds this coming week. When there are still two races to be played to finish the regatta, the general classification has today turned around with an unstoppable Bribon 500 in Classics putting pressure on the Essentia and the Junior making their debut with two partial victories in the Open.

Today, Saturday, the wind blew strongly again in the Pontevedra estuary and the regatta committee repeated the scheme of Friday, setting up the course in front of the town of Salnés and with northerly wind conditions of between 13 and 15 knots. intensity.

Bribon 500 squeezes and Essentia resists in the lead

Perfect day for José Cusí's Bribon 500. The boat belonging to the Real Club Náutico de Sanxenxo, which started from third position overall, went out to the regatta field ready to cut as many points as possible and managed to score two resounding partial victories, placing second, just one point behind Romanian team commanded by Catalin Trandafir, Essentia, which added two seconds and maintains the provisional leadership for the moment.

Jane Abascal (Bribon 500) explained after the end of the day that “we have done good races and we have not made many mistakes. We will see what happens tomorrow, the Essentia is a boat that is going very well and is being very regular, so we will play the regatta tomorrow”.

With these results everything will depend on what happens tomorrow, and at the moment there are up to five teams with clear podium options.

In the Open division, regularity was once again decisive this Saturday. With a constant dance of positions between practically the entire fleet, John Harald's Portuguese Scoundrel One took the lead in the general classification today after adding an eighth and a third in the two races completed. It was the Swiss Junior of Philippe Durr, however, the great protagonist of the day, because the winner of the last six World Championships made his debut today in the regatta field scoring two resounding victories.

“At the beginning there was quite a wave, but the last few meters, with the wind and flat sea, the conditions and the navigation have been extraordinary. That has been the key”, affirmed the skipper of the Junior.

The Swiss Momo team, which has Dieter Schoen at the helm, also took advantage of its results with a ninth and a second that allow it to storm the podium in second position, just four points behind the leader. Third place, meanwhile, is now occupied by James Hilton's North American team, the Scoundrel.

Violeta Álvarez's Stella, which has Juan Debén at the controls and started as the first leader of the Open general classification, was unable to maintain its good run and is in fourteenth position after a day in which various technical problems prevented the team to repeat the good results of the first day.

Tomorrow, Sunday, and with the discard coming into play in the event that the six races on the program are completed, everything could change with a view to the final result of the Rey Juan Carlos El Corte Inglés Master Regatta.

First day for the students of the National Adapted Sailing Center

The Adapted Sailing fleet, for its part, also went out today to compete in the vicinity of the club. The students of the National Adapted Sailing Center completed a total of two tests with victory in both for Irene María Martínez-Almeida's team. Rafael Martínez-Almeida's crew is provisionally in second place, while Pablo Díaz's boat is in third place and Mencía Casas' team is in fourth place.

Tomorrow, Sunday, the third and last day of racing with the departure scheduled for 12:30 p.m. In the afternoon, once the competition is over, the Real Club Náutico de Sanxenxo will host the trophy ceremony for the 7th Rey Juan Carlos El Corte Inglés Master Regatta at 7:00 p.m. in the Plaza del Mar village.

1 Alternative crossing point in Iceland for the Vendée... 2 The roofs of the Carmelite convent of Consuegra need... 3 The families of the Aguilar girls resort to the Hearing... 4 Primavera Sound confirms four more years of festival... 5 López Obrador's offenses against the culture... 6 Charl Schwartzel, LIV's first millionaire 7 Turkey's capital sees a flood that kills a man... 8 These are the cheapest hours of light this Sunday 9 Albacete goes back to return to Second 10 Algeria reaffirms its break with Spain and "deplores"... 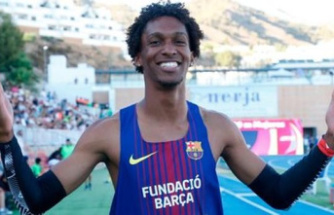 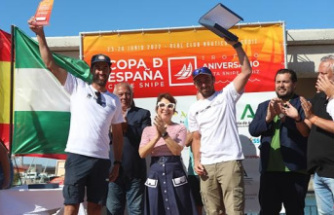 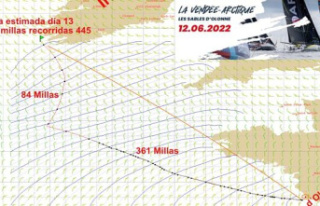 Alternative crossing point in Iceland for the Vendée...