Masters of painting are vindicated at the Maastricht fair, which reopens its doors

The 35th edition of the Tefaf Maastricht art fair, which reopens its doors in person and is held until June 30, once again brings together the world's great dealers and collectors. 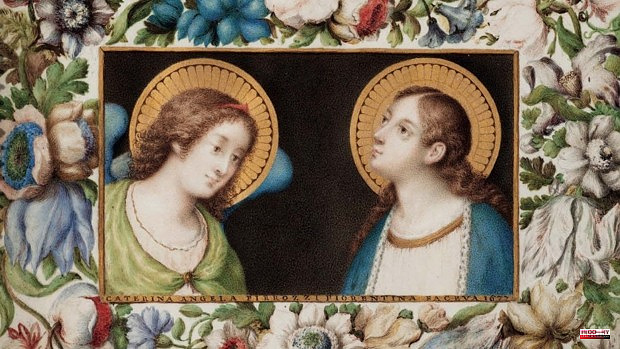 The 35th edition of the Tefaf Maastricht art fair, which reopens its doors in person and is held until June 30, once again brings together the world's great dealers and collectors. A walk through more than seven thousand years of Art History through 20,000 pieces. A Van Gogh greets visitors, but it is not for sale. The Boijmans van Beuningen Museum in Rotterdam presents in the lobby 'Poplars near Nuenen' (1885), by the Dutch painter, before its restoration, which has been sponsored by the Tefaf Museum Restoration Fund.

The great ancient painters, ninguneadas, despised and hidden in acronyms, claim themselves on the holiday.

This is the case of Artemisia Gentileschi (1593-1654), to whom the National Gallery in London dedicated a large anthology in 2020. The Jean-François Heim gallery presents a self-portrait of the artist as 'Cleopatra on her deathbed', seizing a viper, painted around 1620. Its price: 7.5 million euros. Her paintings feature strong, empowered women. Artemisia was raped by a painter friend of her father. And there are those who see in her paintings a form of revenge.

Another artist present at Tefaf is Michaelina Wautier (1604-1689) with 'Portrait of a man like Jacob, Raquel's husband'. Bijl-Van Urk exhibits at her stand this work by the Flemish painter, which has recently begun to gain recognition. This portrait is a further display of her exceptional talent for portraiture. The work of this artist was, for many centuries, posthumously attributed both to the painter Jacob van Oost and to Wautier's own brother.

Although obscured for centuries, many of these artists were highly regarded in their day. Rob Smeets Old Master Paintings in Geneva offers a work by the 17th-century Baroque painter Giovanna Garzoni: the painting of a Madonna and Child was commissioned directly by the Medici family in 1649, testimony to the prestige it had gained. "In the rapidly changing environment we live in today, inclusion and diversity find their place at Tefaf this year through the celebration of great female artists like Giovanna Garzoni," Paul Smeets told 'Artnet'. Added to them is the English painter Mary Beale with a beautiful portrait of her husband, Charles Beale, presented by the Weiss Gallery in London. Made at the beginning of the couple's marriage, it portrays her husband with great sensitivity, who was also her most faithful supporter.

But perhaps the most unique case is that of an 'Annunciation', a recently discovered miniature by Caterina Angela Pierozzi, presented by the Colnaghi Gallery. The image of delicately rendered busts of the Archangel Gabriel and the Virgin, framed in a gold frame with floral decorations, is the earliest known work of the artist. Until now, none of her paintings were believed to have survived. «It is the only known work of Pierozzi and an important rediscovery. It represents the exceptional rarity of discovering the 'first' work and, therefore, revealing an artist's style to the world for the first time”, Jorge Coll, CEO and partner of Colnaghi, told 'Artnet'. "There are few, if any, cases of this phenomenon occurring in recent art history," he continued.

Leaving aside the old female painters, other works stand out at the fair, in some cases happy discoveries, such as the 'Portrait of Admiral Maarten Harpertszoon Tromp', by Jan Lievens (1607-1674), which hangs in the stand of Christopher Bishop Fine Art. The drawing (circa 1652-1653, black chalk on cream paper) is a discovered work by Jan Lievens, missing since 1888. This portrait has been copied throughout history and is one of the most appreciated engravings in history. Netherlands. The location of the original drawing was unknown until its recent discovery in 2020.

For its part, Gallery 19C has brought 'Young Sleeping' to the Dutch fair, an oil painting by Gustave Courbet from 1847. It is one of the first paintings in which the French artist explores the theme of a sleeping woman. On the Salamon stand, the star is 'Madonna with Child and Saint Lawrence, Saint Sebastian, Saint Margaret (?) and Saint Nicholas of Bari' (circa 1420, tempera on panel and gold background), by Andrea di Lippo. It is a small altarpiece by the Florentine painter, intended for private devotion.

As for modern and contemporary painting, Dickinson exhibits 'The Return of the Prodigal Son', by Giorgio de Chirico (1924, tempera on canvas), whose price amounts to 12 million euros - on the reverse he painted 'Mercury and the metaphysicians' -; Galerie von Vertes, 'Infinity Nets', by the highly valued Japanese artist Yayoi Kusama. This abstract work covered in repeated brushstrokes is part of the influential series. Le Minotaure Gallery presents a work by Sophie Taeuber-Arp, a pioneer of 20th-century abstraction.

Ben Janssens Oriental Art releases a ceramic figurine of a court lady from the Tang dynasty. This exceptional figure is a pristine example of sepulchral sculpture from this dynasty, with only minor repairs to the hands and feet. The elegant pottery portrays a court lady in an elegant pose, with delicate facial features accurately rendered. The figure is covered by a thin layer of white slip that preserves traces of the original pigments. De Wit Fine Tapestries presents a fragment of 'Hortus Conclusus' made of wool and silk. The tapestry comes from the southern Netherlands and was woven in the early 16th century. At the stand of the Cahn A.G. highlights 'Head of a Youth', called 'Head of von Heyl' (marble from the end of the 5th century BC), which represents a smoothly modeled oval face of a young male, possibly Apollo. Lullo Pampoulides exhibits a 'Saint Sebastian' at his stand, attributed to Diego de Siloé and made of Carrara marble. Nearly life-size, it was carved by an ambitious 20-year-old Spaniard named Diego de Siloé between 1514 and 1515. It is offered for the first time on the market.

Madrid's Galería Caylus, specializing in Spanish and Italian art, from Gothic painting to Romanticism, shows works in Maastricht that range from the end of the 16th century to the end of the 18th century. Among others, a portrait of Manuel Filiberto de Saboya, future Viceroy of Sicily, painted by Jan Kraek, Italianized Giovanni Caracca, around 1593, when the young man was only five years old; a religious painting by Alonso Cano, one of the best artists of the Spanish Baroque, who captured the expression of Saint Francis of Assisi; and a portrait of Juan López de Robredo, embroiderer of Carlos IV, captured by Francisco de Goya between 1798-1799, in one of his best periods as a portraitist (its estimated price, 6.5 million euros). In addition, it exhibits 'La Virgen de la Leche', by Luis de Morales; 'The Virgin with the Child', by Juan de Flandes (estimated price: 450,000 euros); and two still lifes by Francisco Barranco (280,000 euros for a couple).

The Colnaghi Gallery, founded in 1760 and with offices in Madrid, London and New York, will hang, among other pieces, a mythological scene by the Neapolitan painter Luca Giordano, 'The Triumph of Galatea', a large-format oil painting dated 1675, which comes from from a Venetian collection; a marble woman's head from the 4th century B.C. from the classical Greco-Roman period; and a terracotta portrait of Sarah Bernhardt as Hermione by the French sculptor Charles Adrien Prosper d'Épinay (1836-1914).

The Artur Ramon gallery, based in Barcelona, ​​covers a wide chronological range and techniques in its selection at its stand. From a 16th-century writing desk from Catalonia, decorated with geometric motifs (between 40,000 and 50,000 euros); passing through two reliefs by Felipe de Ribas from around 1638 representing 'The Birth of the Virgin' and 'The Annunciation' and which come from the Main Altarpiece of the Convent of the Conception of San Juan de la Palma in Seville; two inlaid tables with trompe l'oeil birds and musical instruments attributed to Lorenzo Bonuccelli; until the 'Portrait of Thor Lütken', an early work by Edvard Munch, the most expensive work, which is around 1.2 million euros.

At Deborah Elvira, specializing in historical jewelry, a colonial baroque pectoral cross set with rock stones and brightly colored enamelled flower decorations stands out. In addition, she exhibits three pieces from the 17th century, a devotional medallion, also with rock crystal and enamel (30,000 euros); a gold and quartz neck cross (24,000 euros), and a gold and rock crystal parcel (45,000 euros).

Lastly, Mayoral, from Barcelona, ​​presents a series of works from the Spanish postwar period with paintings, drawings and sculptures by Miró, Picasso, Dalí, Tàpies and Chillida. Three pieces stand out in this selection: 'Cuadro 26', a mixed technique on burlap by Manuel Millares, dated between 1957-1958, which was presented at the 1958 Venice Biennale and was also exhibited at the tribute exhibition organized by Juana Mordó in 1973; a watercolor by Joan Miró from 1964, 'Femme entourée d'un couple des oiseaux'; and from that same year 'Gris amb tres ratlles roses', where Antoni Tàpies achieves a unique mix based on mixed media, oil and sand on canvas. These three works are for sale for around one million euros.

1 Evening of Year 2 of Ibai Llanos: guide to everything... 2 What time is Ibai Llanos' Year 2 Evening and... 3 Unusual discovery in Pompeii: a turtle with its egg 4 The cultural bonus collides with empty Spain 5 A Goya painting does not find a buyer at an auction... 6 A video shows dozens of immigrants piled up by Moroccan... 7 Vox denounces in the Cortes that they have entered... 8 The vice president of the Generalitat Valenciana de... 9 These are the cheapest hours of electricity this Saturday,... 10 The EU will present a common emergency plan in July... 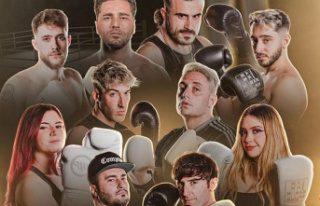 Evening of Year 2 of Ibai Llanos: guide to everything...