Love from 2022: These stars separated this year

A lot of celebrity couples split this year.

A lot of celebrity couples split this year. For some, the line came as a surprise, for other couples, the rumor mill has been brewing for months. Gisele Bundchen (42) is said to have been in contact with a divorce lawyer for some time before the separation from Tom Brady (45) became known. In October, the two released a joint statement on their stories on Instagram. The model and football player have been married for 13 years and have two children together.

Another big power couple in the sports and entertainment world also split up this year: Shakira (45) and Gerard Piqué (35). The two announced the end of their relationship in a statement at the beginning of June, as reported, among other things, by the sports newspaper "Marca". In 2010, the singer and soccer player met while filming the video for Shakira's song "Waka Waka (This Time for Africa)", the official song of the soccer World Cup 2010. At the beginning of 2013 their first son Milan was born, the second son Sasha followed at the beginning of 2015.

Vitali Klitschko (51) and his wife Natalia (48) are getting divorced after 26 years of marriage. The former heavyweight world champion and current mayor of Kyiv confirmed this to the "Bild" newspaper in mid-August. The couple has apparently been separated for years. They have three children together and work together for their country of origin, Ukraine. Most recently, she collected donations for the Klitschko Foundation's "We are all Ukrainians 2022" campaign.

One of the most surprising celebrity separations in 2022 was the relationship between the YouTube stars Bianca "Bibi" (29) and Julian Classen (29). In mid-May, Julian Claßen announced in a story on Instagram: "Bibi has split up." Shortly thereafter, his wife also confirmed the separation. The two internet stars have known each other since school, have been a couple for more than ten years and have been married since 2018. Son Lio was also born in 2018 and daughter Emily followed in 2020.

Harry Styles (28) and Olivia Wilde (38) are said to have taken a break from their relationship in November 2022. That's what multiple sources told People magazine. "He's still touring and is now going abroad. She's focused on her kids and her work in LA," the insider said. Nevertheless, the two are still "close friends", but have "different priorities that separate them".

This news shook Hollywood at the beginning of the year: Jason Momoa (43) and Lisa Bonet (55) ended their relationship after 16 years together, five of which they were married. The two released a joint statement on Instagram, which has since been deleted. The couple have two children together. Lisa Bonet is also the mother of Zoë Kravitz (34), whom she got with her ex-husband Lenny Kravitz (58).

As insiders confirmed to "People" magazine, Kim Kardashian (42) and Pete Davidson (29) broke up again in early August after only nine months of relationship. The reality TV actress and the 'Saturday Night Live' comedian have been dating since October 2021 and have been posting private snaps on Instagram ever since. They walked the red carpet together at the Met Gala in New York.

With the words "After ten years together, we have decided to change our life plan," Michelle Hunziker (45) and Tomaso Trussardi (39) of the Italian news agency "Ansa" confirmed the end of their love in January. Regarding their two children together, the ex-couple further shared: "With love and friendship we continue to take care of the growth of our wonderful girls." The Swiss presenter and the Italian entrepreneur announced their engagement in 2013, and the wedding was celebrated in 2014. 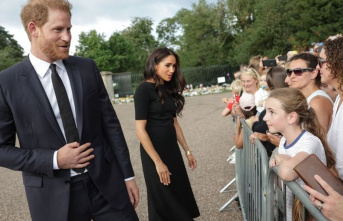