Kiss: the goodbye of a legendary group

It is not normal to see Goya Street so crowded before a concert; there is always some space, a short cut between pedestrians to shorten through. 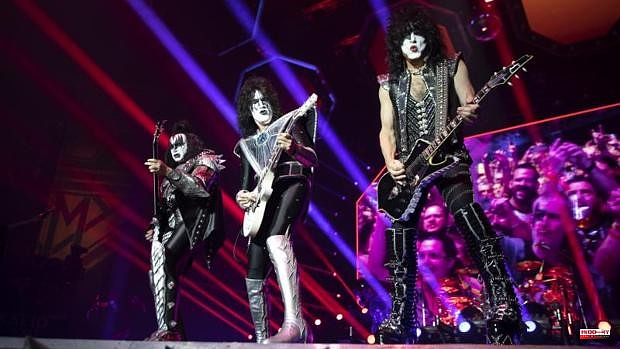 It is not normal to see Goya Street so crowded before a concert; there is always some space, a short cut between pedestrians to shorten through. But yesterday I was waiting for KISS, which is almost a religion, and in the vicinity of the Wizink there wasn't even a subway. They advertise themselves as 'The Hottest Band in the World' (the hottest band in the world) and it is possible that the name falls short. They are the quintessential masters of entertainment and yesterday they showed it again on their last tour before retirement.

They started with everything, as always. 'Detroit rock city' and 'Shout it loud', classics, made a parish that had delivered from home sing and bounce. To me, the truth, it rained in my eyes during the first three songs, overwhelmed by the atmosphere of happiness and nostalgia.

Everything, absolutely everything in his concert is designed to enhance the show. At the beginning, the curtain falls and the musicians descend from the sky on platforms. There are explosions, zip lines (for Stanley to fly), artificial blood, a kilometric tongue, animations and even the fire that Gene Simmons (co-lead and bassist) spits, which is an iconic moment in the quartet's trajectory.

Their music is '70s rock. The trick is that it doesn't sound like it, because there's so much paraphernalia, costume, and fire on stage that it's easy to lose track. KISS is a seventies rock band with distorted guitars, plectrum bass and catchy choruses. Stanley and Simmons form a prolific duo and while the other members have left their seeds behind over the years, theirs are the band's greatest hits. They know a lot about this business and they compose songs that don't seek to invent the wheel, they want to have fun: verse - chorus - verse - chorus. Sometimes there is a guitar solo or a change of tone, but that's it. They found their formula years ago and they are one of those bands that seeks to capture the interpretation of the album live, because they understand what people want to hear when they pay the ticket.

The bad news was the voice of Paul Stanley. He suffered throughout the concert and at times it was hard to see him fight with himself. His years of technique allowed him to hide it a bit, but in the climax moments it was very evident how he backed away from the microphone. In the background, and at specific moments, a voice seemed to sound in playback that supported the live show, something unusual in shows with an 'old-school' rock format. His doubts generated some insecurity in the band, which sounded much better when it was Gene Simmons's turn to sing.

Supported by The Demon, they left great moments: 'I love it loud', a good composition; 'Cold Gin' with some nice choreographed steps at the end; 'Lick it up', where Stanley seemed to resurface before the final fade and 'I was made for lovin' you', personal weakness. I have no doubt that Keith Richards pulled his hair out when he heard that guitar riff for the first time: "How come I didn't write it?" the stray shot thought.

The ending before the encores, tremendous, with several dozen drum rolls, pyrotechnics and Eric Singer on drums playing 'Black Diamond' from above. They said goodbye to Madrid forever with 'Beth' (play piano), 'Do you love me?' and the epic 'Rock n'roll all nite'. It wouldn't be the first time a farewell tour has been announced and then, once it's over, the idea of ​​saying goodbye seems ludicrous. There is a lot of talk about 'retiring on time', but how do you leave something in which you are the King?

The official news is that KISS is getting off the stage. If so, I can always say that I saw them on their lap of honour. More importantly, my brother was on the dance floor, who has grown up with his music and went to queue at 3 in the afternoon, to whom he doesn't care if they have a voice or not; is KISS, 'The Hottest Band in the World'. And that's the truth.

1 Castilla-La Mancha has 138,396 unemployed, 40,236... 2 More than 4,700 Castilians and Leonese leave the strike... 3 The Generalitat Valenciana warns of the “worrying”... 4 Belarra demands more social spending in the Budgets... 5 Two deceased and one injured after colliding two cars... 6 Pedro Cavadas' notice about the use of masks,... 7 Geographer assures that building on lava is an "unfulfillable"... 8 New tobacco prices in Spain from this week: this is... 9 This is the new 10 euro coin that enters circulation... 10 Tourist spending skyrockets above 8,000 million in... 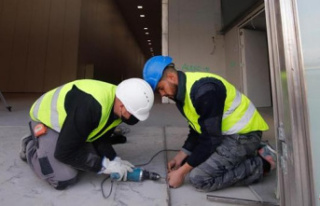