Tenerife society has taken to the streets to say no to what they consider to be the "urban collapse" of the island, showing their rejection of the tourism project in Puertito de Adeje with the motto. 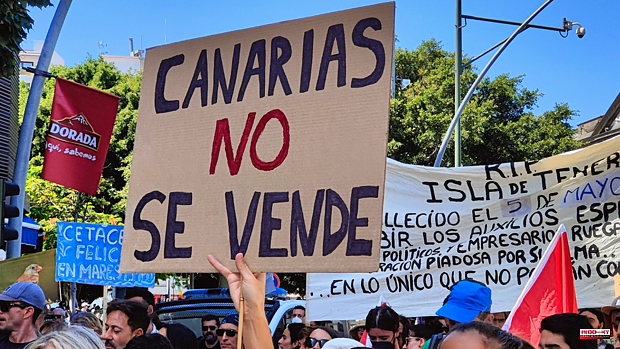 Tenerife society has taken to the streets to say no to what they consider to be the "urban collapse" of the island, showing their rejection of the tourism project in Puertito de Adeje with the motto

The demonstration, which has traveled through the streets of Plaza Weyler, Méndez Núñez, El Pilar and Villalba Hervás until culminating in the facade of the Island Council, has been convened by the Tenerife Association of Friends of Nature (ATAN), supported by other entities such as Salvar Fonsalía, Salvar La Tejita, Salvar El Puertito, Fundación Telesforo Bravo, Tegüico, Youth for Climate Tenerife, Ben Magec-Ecologists in Action and Assembly in Defense of Our Land, among others.

The ATAN Association has indicated in its networks that "it is not only for the Puertito de Adeje, it is Tenerife and the Canary Islands because there is no room for more hotels, nor more cement, nor more works that nobody has requested."

They assure that they are not "environmentalists" or "minority groups", but that there are "thousands of people of all kinds who are already fed up with this speculative model that is destroying our islands".

In the manifesto read, this association and its supporters have asked for help for a "collapsed and over-exploited island" that has "infinite growth and unsustainable development" that must be stopped, because natural spaces are "deteriorated and threatened" because "The political class has no environmental conscience." For this reason they have called for "a change now."

For ATAN and the participating entities and individuals, a tourist moratorium and a residency law are necessary to be able to plan a “tourism decrease plan”, and stop the development of new large infrastructures on the island that threaten natural spaces. Likewise, they ask for more protection and control for natural areas.

For its part, the 'Salvar La Tejita' association has called on citizens to stop these projects, which seek to "raze areas such as Puertito de Adeje", such as "the crazy idea of ​​the Atogo motor circuit, the wastewater discharges that have been uncontrolled for years, the non-stop construction of hotels, the lack of purification and sanitation, the continuing attempt to dust off projects such as the port of Fonsalía or the puddle master plan».

In this line, they have stated that with the demonstration they wanted to paralyze "all this and many more environmental attacks are leading to the collapse of this island" and demand "a radical change in environmental policies, protecting our natural landscapes, our true treasure." , our land cannot withstand more tourist pressure and more environmental damage».

The rejection of the 'Cuna del Alma' project has been the basis of this demonstration, since since its inception it has been surrounded by controversy. It is a luxury complex that will occupy some 430,000 square meters with hotels, apartments, luxury villas, restaurants, swimming pools, a beach club, among other infrastructures.

The construction of this tourist project, promoted by Belgian investors, has been opposed by environmental associations, who consider it to be one more project of an "obsolete" model that puts biodiversity and the conservation of space at risk.

The controversy surrounding the project has led to the precautionary stoppage of the works by the Insular Directorate for Territorial Planning and Historical Heritage of the Cabildo de Tenerife, which is awaiting a technical report on the protection of archaeological elements.

1 The PP asks the Supreme Court for the acquittal of... 2 Banco Santander's alert to its customers for... 3 The sale of homes registers its best April in the... 4 Darwin Núñez becomes the most expensive signing... 5 Marta Calvo's mother asks for justice: "It... 6 They investigate the discovery of the body of a foreign... 7 They revive a man who was lying in a gutter with his... 8 Juan Roig Angels' investment company invests... 9 The terrible hygienic conditions of seven abandoned... 10 Provisional prison for the detainee for the kidnapping... 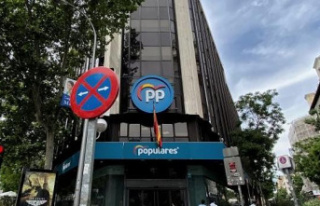 The PP asks the Supreme Court for the acquittal of...