Media Storm, in a beautiful ending, beat The Way Of Bonnie, getting the Madrid Grand Prix

On Saturday, in a very pleasant afternoon-night, the last day of the Spring Season was held at the La Zarzuela Hippodrome, with the Madrid Grand Prix as the main event. 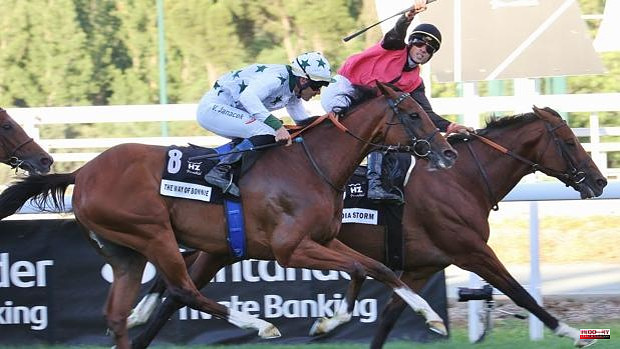 On Saturday, in a very pleasant afternoon-night, the last day of the Spring Season was held at the La Zarzuela Hippodrome, with the Madrid Grand Prix as the main event. Great public attendance, who thoroughly enjoyed the excitement of the horse races, the show, the music and the gastronomy.

The afternoon began at 6:45 p.m. with the first race, the Andrés Ramos Covarrubias Award, reserved for riders and gentlemen, for horses and mares four years of age and older, over a 1,200-meter sprint in a straight line. six participants. Sansevero came out very determined as soon as the drawers were opened, it seemed that he could get the victory, but with 200 meters to go he completely disappeared. Derdas, coming from the outside lanes and finishing hard, got an easy and deserved victory.

In second place, the Duke of Osuna Award was disputed, for three-year-old colts and fillies that had not won a prize of 15,000 euros. Eight candidates for victory. 1,400 meters of travel. From the start there was a nice duel between Something and Incredit, the two led the race setting the pace of it, thus entering the final stretch in which the victory was played head to head. Finally Something, by half a length, passed the goal post first. A body and a half behind came Family Trip, who stole the bronze at the same goal post from Magic Warrior, going ahead through a neck.

The third race was the Premio Mahou-El País, for horses and mares three years old and older. Seven candidates for victory started from the 2,000 meter pole. The race was decided with some precious and very exciting last meters with the three horses fighting for the victory with several alternatives between them. The Game finally came out on top, beating Medicean Blue by just one head. Third place in the middle length went to Severus.

In fourth place was the Madrid Grand Prix (patronized by Bilbao) (Made in Spain) (Lototurf), for horses and mares three years and older. The best of our turf came together in this prestigious race. 2,500 meters separated the participants from glory. A Listed test framed in the Made in Spain program with prizes for horses born and raised in Spain. With great expectation, the start was given, receiving the participants with applause at the first step across the finish line. The race was very tactical until the entrance to the final stretch, where hostilities began. Big Call faked first, but it soon became clear that the victory was going to be between Media Storm and The Way of Bonnie, who gave us a beautiful arrival. Media Storm was impressive, keeping the favorite at bay, achieving a huge victory by a quarter of a length. Third came Big Call, one length and fourth behind, with Dayshann fourth, who crossed the finish line half a length later.

In fifth place, the Baldoria Prize (sponsored by Aquanima-Grupo Santander) was disputed, for mares three years and older. Eight candidates for victory started from the 1,600 meter pole. Spectacular victory for Samedi Rien, who made the typical waiting race entering the final stretch last, but three hundred meters from the finish, with a brutal change of pace, 'stopped' his rivals, winning by two lengths. Second was her patio partner Upa Lola, third being Aunt Agatha at a quarter length.

The sixth race was the Premio El Señor, a benchmark handicap for horses and mares three years and older. nine participants. 2,000 meters of travel. Mauro, the top of the scale, set the pace of the test from the start, entering that privileged position in the final stretch. He tried to get strong through the posts, but made the mistake of leaving a gap through which Philau attacked with force and decision, passing him and getting a nice victory. Third, already almost four lengths away, came Maitre Yoda.

The day closed, in seventh place, with the Villa D'Este Award, a reference handicap, for horses and mares three years and older, over the distance of 1,900 metres. Nine candidates for victory, under the orders of the starter. Race won with great ease by Big Mack, who was always very well placed, for in the final stretch, almost to the hands, went with resounding towards the finish line, winning with great authority by four and a half lengths. Second was Ballet Star who finished in the finals, with Melampo third, also far away, almost six lengths away.

1 Thousands of people demonstrate against NATO in the... 2 Canceled 42 flights to or from Spain on the third... 3 Marc Márquez shows his tremendous scar on his arm 4 Spectacular comeback by Aleix after his incident with... 5 The Nambroca library is dedicated to Juan Sánchez... 6 The call for help from the victim of the abuse of... 7 Paul McCartney sings with Springsteen at Glastonbury... 8 Manowar announces "legal measures" against... 9 Six arrested in two Benidorm premises after intensifying... 10 The Generalitat Valenciana will approve “in the... 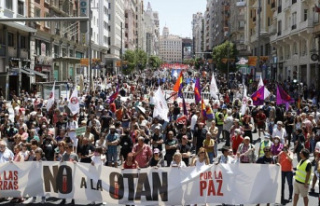 Thousands of people demonstrate against NATO in the...