Accompanied by the good weather in the capital, 23°C, thousands of people have protested this Sunday against the NATO Summit to be held in Madrid on June 29 and 30. 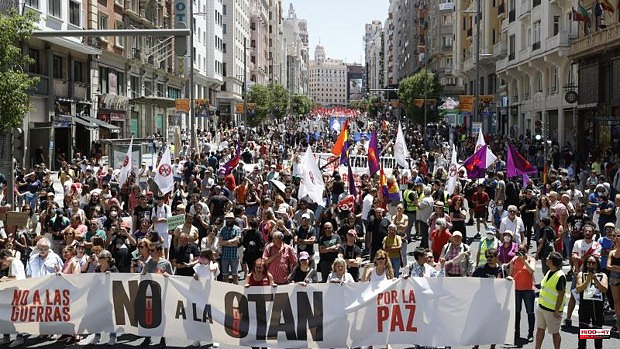 Accompanied by the good weather in the capital, 23°C, thousands of people have protested this Sunday against the NATO Summit to be held in Madrid on June 29 and 30. The presence at the demonstration of the leader of the PCE, Enrique Santiago, had generated a stir because as Secretary of State he is still a high position of the same Government that hosts the meeting of the Atlantic Alliance. His role, however, has been testimonial. He has joined the demonstration when he had already started, he has been placed at the head of the PCE just enough to have his photo taken and he has left the march long before its conclusion.

Despite the fact that the antimilitarist and anti-NATO claims are shared throughout the United We Can space, in the coalition they have opted for a low profile so as not to put the Government in tension with the PSOE.

Podemos has not even attended and Izquierda Unida has left the leading role in its federal spokesperson, Sira Rego, who has claimed the participation of IU, far behind the main header, for its "DNA" in favor of "the culture of peace" . The presence of Yolanda Díaz, Ione Belarra, Irene Montero and Alberto Garzón would have been too difficult for Pedro Sánchez to digest, even more so given the importance of this summit for the Atlantic Alliance due to the war in Ukraine caused by the invasion of Russia of Vladimir Putin.

In the PCE delegation, just behind IU, a coalition of which the communist party is a part, there were deputies like Miguel Ángel Bustamante and MEPs like Manuel Pineda. But the most anticipated and most significant presence was that of Santiago, Secretary of State for the 2030 Agenda, who has come with sunglasses and little desire for prominence.

Beyond the political key, where this legislature there have been important frictions between PSOE and United We Can on account of sending weapons to Ukraine, the demonstration has passed with absolute calm, between Atocha and Plaza España, and has made slow progress. Néstor Rego, deputy of the BNG, headed the Galician nationalism section, also opposed to NATO.

In a festive atmosphere, there have been pacifist and anti-militarist chants calling for the dissolution of the Atlantic Alliance, allocating Defense money to education and health, and putting an end to "border" and immigration control.

At the height of Cibeles, although Ukrainian flags accompany the Spanish ones that surround the goddess, there have also been chants against the European Union (EU). "The EU kills, NATO finishes".

Isolated protesters have branded the Executive as "hypocritical, racist and imperialist." A discordant note between the classics, «NATO, no», «bases out» and «military expenses, for schools and hospitals».

The communist youth, in a tone that contrasts with the message that the protest sought to convey, clamored to send "the powers" to "the stake." But there has been no hint of an incident and the extensive police deployment has been a mere witness to the protest. Performances by La Otra and Alicia Ramos at the end of the march, with a final climax from the organizers: "No to war, yes to peace."

According to the organization, 30,000 demonstrators have supported the protest. The Government Delegation lowers attendance to 2,200. A usual war in figures that there is no song for peace that mitigates..

1 Canceled 42 flights to or from Spain on the third... 2 Marc Márquez shows his tremendous scar on his arm 3 Spectacular comeback by Aleix after his incident with... 4 The Nambroca library is dedicated to Juan Sánchez... 5 The call for help from the victim of the abuse of... 6 Paul McCartney sings with Springsteen at Glastonbury... 7 Manowar announces "legal measures" against... 8 Six arrested in two Benidorm premises after intensifying... 9 The Generalitat Valenciana will approve “in the... 10 Schedule and where to see Alcaraz - Struff live 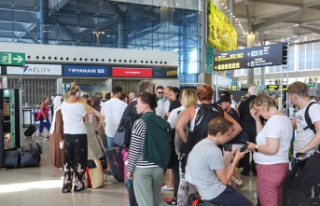 Canceled 42 flights to or from Spain on the third...