"The lion's den": BeeSafe from DHDL in the test: How the bike tool is supposed to protect your valuables from thieves

The Vox start-up show "The Lion's Den" is entering the next round. 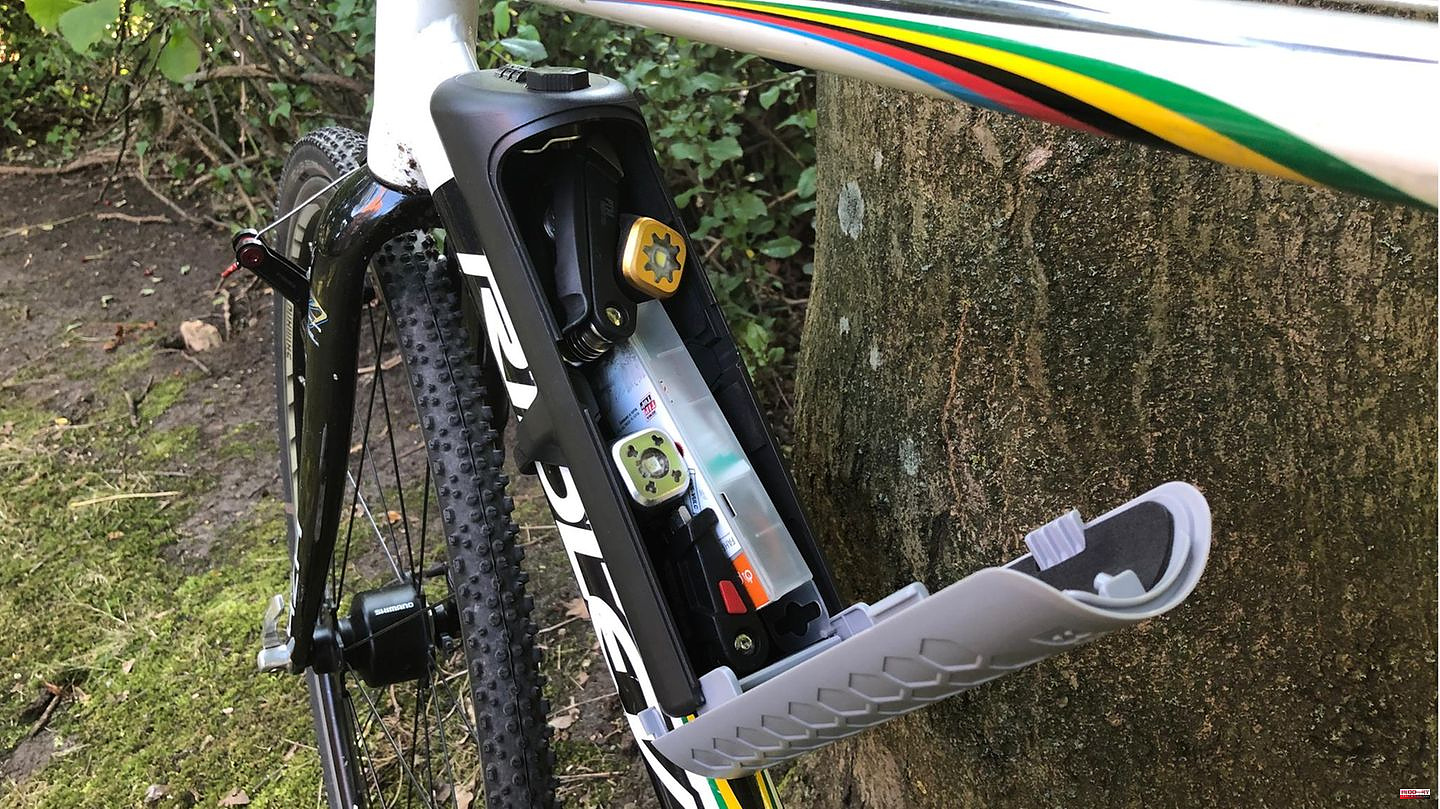 The Vox start-up show "The Lion's Den" is entering the next round. And this time, too, the stern editorial team is examining selected products from creative founders. Let's start with a bike tool designed to make life difficult for thieves.

As with the Flip (previously 2bag), a combination of bike backpack and saddle bag (click here for the stern test), there is also a very young founder behind BeeSafe. Aaron Holzhäuer is 17 years young and designed and constructed the first prototypes of his lockable bike box himself and produced it on his own 3D printer. His motive? The enthusiastic biker has been robbed several times in his hometown of Berlin, losing his front and rear lights as well as his expensive speedometers. This should be over now. BeeSafe is a kind of locker for the bike that, unlike a saddlebag, can only be opened with a code or key and, above all, cannot be easily dismantled and taken away. But how practical and secure is BeeSafe really? We took a closer look at the version with the combination lock.

The scope of delivery of the lockable bicycle box (with combination lock) includes:

If you open the BeeSafe box, the installation is explained briefly and concisely in six colored pictures on the inside. Otherwise, BeeSafe initially makes a stable and robust impression. The box for the bike basically consists of two parts - namely the box itself and a lid. It is connected to the box at the bottom and can be opened at a 90-degree angle. BeeSafe is closed with a sliding mechanism. In the version we tested, the box and its contents are locked with a three-digit combination lock. More on that later. The BeeSafe's empty weight of around 350 grams should make racing drivers swallow a little at first. However, the core target group should be able to get over the small additional burden. A few more words about the inner workings of BeeSafe: The box was lined with black foam to protect speedometers, lighting and sunglasses from scratches.

Before assembly, we measured the BeeSafe with a ruler. With the lid closed, the box is about 26.5 centimeters long, 8.5 centimeters high and about eight centimeters wide. Sounds like a lot at first. The pack size turns out to be a little smaller. Here we came to a length of about 20 centimeters. There is six centimeters of space in width. At least six centimeters remain at the highest point of the rounded lid. BeeSafe looks surprisingly spacious. You will find out a little later what actually fits in the box.

The downside right at the start: Unfortunately, BeeSafe can only be easily mounted on the head tube (that's right: there is no alternative for women's bikes anyway). The reason is simple: If you attach the box to the top or saddle tube, packing it is extremely impractical because it is upside down. Surprisingly, the laws of physics cannot be outwitted when it is opened. To prevent the contents from falling onto the street, you have to keep your hand underneath. That's not practical. So the head tube is the perfect place to mount BeeSafe. The bottle holder may get in the way. Solution: Remove the bottle holder or screw it to the saddle tube. A possible alternative is the top tube. Problem 1: On many bikes, this is where the brake and shift cables run, which get in the way during assembly. Problem 2: When climbing up, the box could become an obstacle. After all, it is almost nine centimeters high.

We mounted BeeSafe to the head tube using the included steel bracket. The bracket is covered with a rubber coating that protects the frame from scratches. The bracket is thus placed around the frame from below. Then you put the box on top and tighten the whole thing with two nuts. You do not need your own tools for this. Two protective caps ensure the optical finish. As an option, BeeSafe can also be attached to the usually already existing holes for the drinking bottle holder. This is a bit fiddly, because first an adapter has to be screwed onto the frame and then the bike box has to be connected to the adapter. In addition, a Phillips screwdriver should be ready for assembly. Attention: First try the variant with the steel bracket. That seems much more comfortable to us and should normally work well. For mountain bikes with a slightly thicker head tube, the option remains with the adapter on the drinking bottle hole. That works fine too.

Before BeeSafe can be packed, a new combination should be set for the version with a combination lock. It's not rocket science, but it does require a little finesse. In our case, that was there and the new code was "programmed" in a matter of moments. Now the exciting question: What actually fits in? We packed and successfully stowed away: three LED bicycle lamps, a multi-tool and a breakdown kit for on the go. This was not a particular challenge for BeeSafe. With a bit of skill, there would have been room for a pair of sunglasses. Important: When the box is pushed closed, the guide rails of the lid must not be blocked. This happened to us on the first try. Then the lid gets stuck and BeeSafe cannot be closed and closed. Unfortunately, BeeSafe reaches its limits with larger front and rear lights. Not much more than the lighting then fits into the box. Once all the valuables are in and the lid is closed, you lock BeeSafe with the key or by setting the combination lock to any combination.

Aaron Holzhäuer not only had a good idea, he also implemented it smartly. BeeSafe is a cleverly thought-out bike tool - with small weaknesses. The assembly is easy to do. The instructions are clear and cleverly placed on the box. Unfortunately, from our point of view, the box can only really be mounted on the head tube. The idea of ​​screwing the bracket from the inside with a plastic Allen key is convincing. Thieves will have a hard time cracking BeeSafe in passing, because the adapter for the drinking bottle holes is also screwed to the inside of the bike box. We also had no problems with the combination lock. Compared to some saddlebags, the pack size of BeeSafe is absolutely competitive. With a little skill, a surprising amount of small stuff fits in. Small disadvantage: You won't get far with squeezing. There is hardly any room to maneuver because of the plastic housing. Especially not if a somewhat larger lighting set is to be stowed away. BeeSafe is a tool for everyday cyclists and bike commuters who ride their bikes to the office or often use them for short tours in the city and have to park them again and again.

With a lion hungry for success at his side, Aaron wants to move his heart project forward and bring it to market. For 145,000 euros he offers the five investors in "The Lion's Den" 25.1 percent of his start-up. You can find out whether one of the lions opens his safe and invests in the young founder tonight from 8:15 p.m. on Vox.

Note: the BeeSafe variant with solar panels on the lid was not available at the time of publication. You can read an update with experiences here as soon as the product is available.

1 "The Lion's Den": Lemonist in the test:... 2 Fascination: sports cars continue to rely on non-hybrid... 3 Driving report: BMW X7: Luxury SUV convinces in many... 4 The diagnosis: The woman is pulled lifeless from the... 5 "StupidWalkChallenge" at Tiktok: Why young... 6 Robert LuPone: "The Sopranos" actor is dead 7 Rocker: Ozzy Osbourne wants to go back to England 8 Tweets against sadness: "Power sentences for... 9 Science: Growing Crystals: Your kids can experiment... 10 57,000 products tested: bad cheese, good vegetables:... 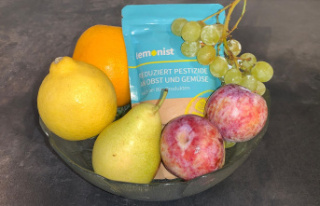