Washington — A U.S. nuclear submarine sustained damage and some crew members were injured when it "struck an object" while operating at depth a week ago in one The U.S. Navy confirmed in a statement on Thursday that the USS Connecticut, a nuclear-powered fast-attack submarine, struck the unidentified object on October 2, "while operating in international waters in the Indo-Pacific region."

U.S. defense officials told CBS News correspondent David Martin the collision occurred in the South China Sea, one of two adjoining bodies of water where the U.S. and its allies have repeatedly challenged China's territorial claims. China on Friday demanded more information on the U.S. Navy accident that took place somewhere off its east coast.

The U.S. officials told Martin on Thursday that the Connecticut had returned to the surface under its own power and was expected to arrive soon in Guam so the damage could be fully assessed. The officials told CBS News that two crew members suffered "moderate" injuries and several more sustained minor bumps and bruises. All were treated by Navy corpsman aboard the vessel, and nobody was taken off the sub.

The submarine itself, one of almost 70 in the U.S. Navy's nuclear-powered fleet, "remains in a safe and stable condition," according to the Navy statement. Its nuclear propulsion system and related areas "were not affected and remain fully operational."

China's Global Times newspaper reported that the Foreign Ministry had voiced "grave concerns" about the incident, quoting Foreign Ministry spokesman Zhao Lijian as urging the U.S. to "provide details, its purpose of cruising, and whether it caused a nuclear leak or damaged the marine environment."

All weapons systems on the attack submarine were also undamaged, the U.S. officials told Martin.

"The extent of damage to the remainder of the submarine is being assessed," the Navy said in its statement, adding that the incident would be investigated.

1 Two senior living apartments in Capitol Heights were... 2 Madonna Stuns Jimmy Fallon when she crawls on his... 3 Senate Dems are outraged at the "cruel treatment"... 4 The Grand Theft Auto Trilogy is being remastered for... 5 Photos: Blue Angels take to flight as San Francisco... 6 2021 Mr. Olympia Friday Report -- Fitness, Figure,... 7 Gloria Estefan remembers fleeing Cuba when she was... 8 ‘I wanted to run with her just to be with her’;... 9 Google cracks down on climate change denial by targeting... 10 Nobel in chemistry honors ‘greener’ way to build... 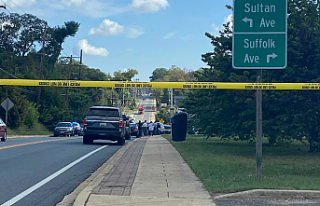