‘I wanted to run with her just to be with her’; Couple running 100th marathon together in Chicago

When they met, Jim Ballard’s typical running route was about three miles. But along those few miles, he kept seeing a woman running the opposite way along the path.

The Chicago natives met in 1979 while running in McKinley Park, passing each other daily and, unbeknownst to each other, both rushing to finish work and get out to the track in hopes of seeing one another.
“I would get there at a certain time, and I noticed that Jim would get there at a certain time as well,” Linda said. “He would go around the opposite way.”
Chats along the path became shared information about 5Ks, which became meeting up at the races and, eventually, dating. They ran their first Chicago marathon together in 1981.

This year, they’ve been married 39 years. And they’re about to run their 100th marathon together, in their hometown.

Running is not only how they met. It’s become part of their story, and part of their relationship. They’ve learned to be patient with each other, as they are not always at the same pace. They know when the other person needs a running buddy, or when they’d rather jog alone. And they know how to gently jostle the other person out of bed and out for a run, even on a drizzly Chicago morning.

“If you take a week off of running or something, you feel like, ‘Whoa,’ ” Jim said. “It’s not just for health. It’s part of your life.”
Both are South Side natives — although Linda, 61, is a Cubs fan, and Jim, 70, roots for the White Sox — Linda growing up in Canaryville and Jim from Bridgeport. They met at a time when running was becoming more popular. Frank Shorter had just won an Olympic marathon gold medal in 1972; Mayor Michael Bilandic, a runner himself and proponent of the Chicago marathon, could be seen jogging in the same park where the couple exercised.

For Jim, who learned to run in combat boots in the Marines, running was a bit of an exercise and distraction. For Linda, she was intent on training for a marathon.

So he started running alongside her.
His first marathon turned out to be an ultramarathon, something he didn’t realize until he arrived. Linda had signed them up for a race when she was training for the Chicago marathon; it turned out to be a 50K.

“We ran it together,” he said. “It was fun.”
They married at St. Gabriel Catholic Church in Canaryville, which they showed their daughter this week, in town for the marathon. They lived in Chicago until 1998, when they moved to Arizona.

They kept making their way back, for 25 Chicago marathons. Often, they served as pacers, helping to keep everyone on pace.

Chicago is special, they said. They’ve run in nearly every state — seven left to go — and part of the allure is their personal connection to the city. The rest of it is the encouragement from the friendly crowds, the dancing in Chinatown and Greektown.

“For me that’s the best marathon there is,” Jim said. Linda added, “The whole city just comes together for one day. Everybody’s so happy.”

They had hoped to run their 100th marathon last year, but COVID-19 intervened. They weren’t sure until recently if it would work out; they traveled to Omaha weeks ago for a marathon there to serve as the 99th, keeping the special number of 100 for their special city.
This week, they are taking it easy, choosing walks over runs. They’ll eat carefully Saturday night, and put on their favorite compression socks Sunday morning.

They’ll run through the streets of the city, cheered on by strangers, friends and their daughter.

And after? “We try to find the greasiest hamburger we can find, and have a cold Pepsi or a beer,” Jim said.

Although this is 100, they couple said it’s not an ending. They have more miles to go.

“I wanted to run with her just to be with her,” Jim said. “We always ran together, no matter where we went.”

1 Google cracks down on climate change denial by targeting... 2 Nobel in chemistry honors ‘greener’ way to build... 3 Russian film crew in orbit to make first movie in... 4 NASA chief “all in” for Tom Cruise to film on... 5 Sue Grafton’s alphabet novels headed to television 6 Instagram and teens: How to keep your kids safe 7 The Latest: Panel to meet on shots for ages 5-11 next... 8 Rome marchers protest against the vaccine rule 9 Iraqis vote for new parliament hoping for change 10 Russians flock to Serbia for Western-made COVID-19... 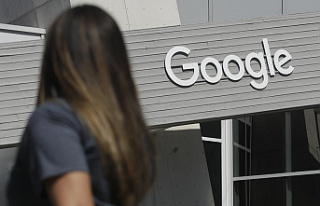 Google cracks down on climate change denial by targeting...