Catherine Colonna is the new head of French diplomacy and will be making her first visit to Ukraine on Monday, May 30th to "show France’s solidarity with Ukraine's people in face of Russian aggression", stated the Quai D'Orsay.

Catherine Colonna is the new head of French diplomacy and will be making her first visit to Ukraine on Monday, May 30th to "show France’s solidarity with Ukraine's people in face of Russian aggression", stated the Quai D'Orsay.

Since the Russian attack on Ukraine began on February 24, 2017, she is the most senior French official who has visited Ukraine.

The minister stated that the Minister would meet President Volodymyr Zelensky and Dmytro Kuleba from Ukraine "to discuss in detail the blockade of oil and grain exports from Ukraine, which raises real risk of food insecurity". communicated.

Boutcha is a central Russian town where Russian troops perpetrated massacres of civilians. The Minister will also visit Boutcha. She will "handover civil security equipment (fire trucks, ambulances)" to authorities.

Catherine Colonna made her first visit to Germany as a foreign visitor last Tuesday. While she stressed that none of the G7 countries were at war with Russia, she called for "further strengthening support for Ukraine at all levels in the long-term."

She also mentioned Emmanuel Macron’s idea of a European political community, which is likely to include Great Britain or Ukraine.

On Monday, President Zelensky will address European leaders who gathered in Brussels for an extraordinary summit dedicated to his country.

1 Champions League: Liverpool "left the wild",... 2 Gironde: a house fire in Cadillac-en-Fronsadais 3 Social support CAF: 18-months of delays in processing... 4 Consumption. Discover the top 30 French brands that... 5 A motorcyclist, serious when being run over by a vehicle... 6 Income Statement in Valencia: the Generalitat offers... 7 Real Valladolid returns to the First Division: this... 8 Failed Liverpool-Real Madrid plane crash, war in Ukraine...... 9 Legislative: The official campaign kicks off Monday,... 10 Fiasco at Stade de France: The Interior and the Police... 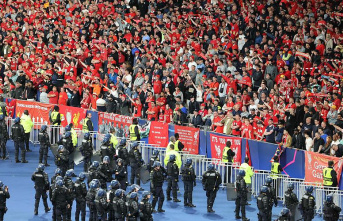