He has been in the regional capital for five years and 30 in Castilla-La Mancha. 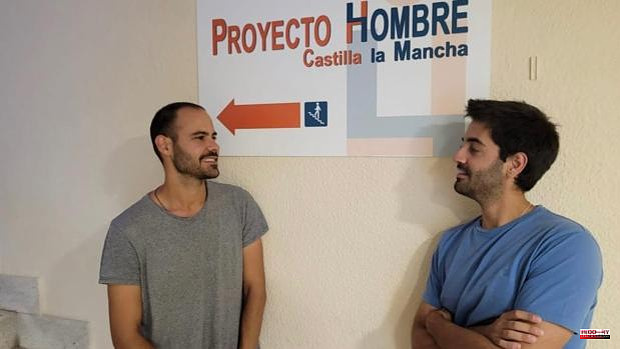 He has been in the regional capital for five years and 30 in Castilla-La Mancha. Anyone with addiction problems can go to Proyecto Hombre-Toledo, based in the old School of Nursing, on Calle Alicante number 2, where therapists María del Valle Novillo (now on maternity leave), Alejandro Blanco and Jorge Luengo work. All psychologists. The pandemic forced this resource, already consolidated in the city, to have to adapt to teleworking, "which has nothing to do with our philosophy because Proyecto Hombre is governed by humanism, by contact with the person, mutual support, the link, and evidence-based therapies”, says Alejandro Blanco.

The therapist adds that "the person who attends his group session, which is his space, is not the same as having to stay at home with his children running around without being able to focus on himself and his consumption problem."

For this reason, it has taken a long time to return to the pre-pandemic dynamic after the return to normality, to the point that family groups - one of the bases of the work of Proyecto Hombre, which serves both people with consumption problems and their families—have been noticeably reduced and without the connection of relatives.

Before Covid, Proyecto Hombre Toledo cared for four groups, each with 8-12 people, in which the predominant pathology was cocaine use. There are also polydrug groups (cannabis and cocaine) and a new reality: behavioral addictions, people who come directly to betting houses with gambling problems, increasingly through mobile phones.

In Toledo there are two programs, for adults (with individual or group intervention) and for prevention, for young people. Jorge Luengo explains that the form of intervention depends especially on the diagnosis. «Many come with a dual problem, and apart from the problem of addiction there is a psychiatric diagnosis (schizophrenia, major depression, personality...). And it is difficult to include that person in a group intervention. The other program is Prevention, aimed at young people between 13 and 21 years old, although the average is 17 years old.

Currently, Proyecto Hombre Toledo serves fifty people —plus family members who want to be part of the process—, although in the pre-covid stage it reached 80 participants. In addition, there is the relapse prevention group, aimed at people who have already been discharged after finishing the process, but who somehow want to continue to be linked to the program and the center. «Support among group mates is basic for the prevention of possible relapses. In this 'registration group' there are usually about six or eight people fixed, "says Blanco.

The average age of the adult program is 37 years. "It's curious because when you divide it between men and women, the average age of male users who come to the resource is 36 years old, and that of women is 46 years old," says Luengo. A few years ago, Proyecto Hombre held conferences called 'Gender Project', where the reality of women and addiction was addressed, in which there is a significant difference between the sexes. «In fact, in the recently published Observatory of Proyecto Hombre, it is confirmed that there has been an increase in the attention of women, who are encouraged to go to the resource, and that is very important. We are very happy”, underlines Blanco.

The woman arrives with greater deterioration and less social support; she comes later than the man and when her addiction has become more chronic. “The woman basically takes care of herself, but she is not taken care of as much or was not taken care of, and that is changing, as the data indicates. Many of the girls or women who come to the resort already have a major problem, which is usually alcohol consumption, and also cocaine, but smoked, "adds the therapist.

Snorting cocaine is a much more widespread addiction, and getting to smoke it means that the problem is greater because it affects more areas: work, mental health, relationships with the family and legal problems. There is more chronification.

«We see that there are women with alcohol problems for many years, who have been coping with it in a very lonely way; and women who consume smoked cocaine, a fact that creates a much more problematic environment when they arrive at the center than with men. Most of these use cocaine, but they keep their jobs, they have the support of their partners, their parents, and it is easier to involve the family, while of the women we serve, only one is accompanied, and also by her mother. Although it is true that this is changing, explains Blanco.

Most of these women have children and are single, which has led to addressing this problem collectively, working in groups. In the Therapeutic Community of Proyecto Hombre Guadalajara, a program has been launched that is generating "many joys and many discharges." The way of working has changed and now it is done with groups of women in the Therapeutic Community 'Proyecto Hombre' in Guadalajara. «It is going wonderfully and, in fact, right now we are at the highest rate in the history of Proyecto Hombre de Castilla-La Mancha of women cared for in the Therapeutic Community; women who reach discharge and go to reintegration when they return to the place where they live. That is why I tell you that things are changing, because at one point it was decided to work directly with women and with their consumption problems, which is different from that of men».

The 'Edades' Survey, prepared by the National Plan on Drugs, offers an explanation for the lower access of women to these resources than men: the consumption of illegal substances is very low in women, in general, although in legal substances it is increasing. matching with men (alcohol consumption is quite similar). Another fact is that women consume much higher percentages of hypnosedatives (anxiolytics) prescribed by doctors, a consumption that rose from 19% in 2011 to 27% in 2019. While in the last month of 2019 men are a 7% and women 11%. Luengo argues that "since women consume more legal substances, perhaps the perception of the problem may come later as it is more accepted or normalized, you do not have to hide, let's say, to consume it."

Regarding the youth program, Castilla-La Mancha is the region, after La Rioja, with the highest prevalence of bottle drinking in the last year, with an average of 15% of people who report having done it. In this consumption, the figures between men and women are more equal, but these two therapists from Proyecto Hombre Toledo agree in underlining the extremely high levels of joint consumption. «All, absolutely all the boys we serve right now in the youth program are for cannabis. The consumption of joints is brutal. We have had boys who have come for games, videogames, social networks... but currently there are 13 boys we serve for the use or abuse of cannabis, which does not have to be linked to alcohol consumption. Several of the kids we serve use cannabis on a daily basis and don't necessarily drink alcohol every day."

Blanco says that the feeling that therapists have in the face of this reality is that "cannabis stops you from doing things a lot, it demotivates you, you wake up in the morning and you're already smoking and hitting a huge downturn in mood, giving yourself everything anyway, you don't socialize, you don't show interest in studies, you don't look for work... in the end you become more dependent in general. And, depending on the level you consume, it can also affect you on a mental health level.

Then he adds that "it can even affect a legal level because many of the boys we serve are referred by Minors technicians, for some measure that they have for probation, a fine, a robbery ... and there are also cases of domestic violence, assaults their parents when they put limits on their consumption, or they don't want to give you money, conflicts arise, and it's something we also deal with».

Therapists stress that cannabis is an important issue because, although it seems like a minor issue because it is normalized and taken to the same level as smoking tobacco or drinking a cane ("which are also dangerous"), the reality is that it is being addressed by cannabis to 100% of young people.

Proyecto Hombre is a free resource, although if the person wishes they can make a financial contribution. The cost of one of these therapies, lasting 18 months, is approximately 250 euros per month. «Although the resource is free, there are people for whom going through Proyecto Hombre generates a great change in their lives, and an altruistic and grateful movement is produced that leads them to contribute so that it is maintained, and for which we are very grateful. In general, throughout the process people come to contribute, but it is not a constant nor is it something that keeps us going. We receive subsidies from the Board, the City Council, the Provincial Council, the European Social Fund, some private foundation and then the contributions of the people. We are always on the limit and we could use more subsidies to be able to support ourselves; many times we are limited to be able to arrive».

When a person arrives at Proyecto Hombre - they come from all professions, social or economic spheres - an individualized intervention plan is drawn up, where the objectives are set in the different areas of that person's life. "The average time of therapy is 18 months, but it varies depending on the time in which the objectives are achieved", explains Jorge Luengo.

The use of prostitution is a reality associated with some types of consumption, such as alcohol or cocaine, and the therapists add that they often get this drug in these establishments, according to the therapy participants.

How to manage these realities of addictions when the experts have the patient in front of them? According to Luengo, it is necessary to analyze the individual as a whole and "if there are consumption problems, it is that in the rest of the areas there are deficits and conflicts, and what we are trying to do is to see their life as a whole, what their family, social, what do they spend their leisure time on, and try to accompany the person in this process of becoming aware of the possible problems that may arise if they continue with this type of habit".

Alejandro Blanco recalls the teachings of a teacher who "said that when something is accelerating a significant discomfort and you notice that it is beginning to interfere in your life, it is worth approaching a resource like ours to seek help and consider it because perfectly, With a little help, most situations will be able to cope and learn to manage it. If you let time pass, that suffering can become something great. That's why we encourage people to come to us as soon as they notice a problem."

1 Princess Leonor and Infanta Sofía continue their... 2 The enigmatic funerary piece to Doña Mayor Guillén... 3 Mónica Oltra personally offered her successor the... 4 The EU maintains the blockade on Polish funds because... 5 Barça announces its first signing: Franck Kessié 6 Carlota Casiraghi's coral manicure is perfect... 7 German leader meets with unions and employers to combat... 8 Myanmar hosts the 1st Regional Meeting since the army... 9 PP and Vox charge against Montero for his trip to... 10 Colau fails for the sixth time in a row, with a 4.1,... 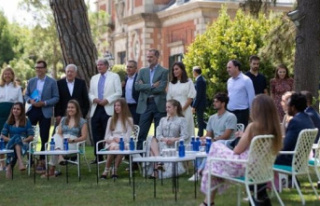