Catalina Iliescu, vice-rector for Culture, Sports and University Extension; Martín Sanz, director of Communication and International Relations of Hidraqua and Larissa Timofeeva, director of the University Extension Secretariat; have presented at the Headquarters of the University of Alicante the cycle of conferences that they launch this month and that will continue until January 2023, in order to address how the most representative sectors of the Valencian Community work in the fight against the climate crisis . 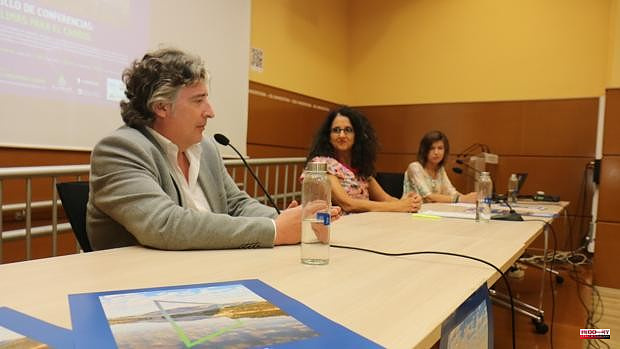 Catalina Iliescu, vice-rector for Culture, Sports and University Extension; Martín Sanz, director of Communication and International Relations of Hidraqua and Larissa Timofeeva, director of the University Extension Secretariat; have presented at the Headquarters of the University of Alicante the cycle of conferences that they launch this month and that will continue until January 2023, in order to address how the most representative sectors of the Valencian Community work in the fight against the climate crisis .

The initiative is included within the annual agreement that Hidraqua maintains with the University of Alicante in order to promote joint academic and cultural activities in those municipalities where the company and its affiliated companies operate. Each of these meetings will be focused on a specific sector and will feature experts in the field from the University of Alicante, Hidraqua and the City Council where each day is organized.

The cycle will begin in Torrevieja on June 16 to address the fight against the climate crisis from the Tourism sector. This same month, the Elda meeting will take place, linked to climate change and the institutional sector, and will be followed by meetings in Orihuela and Petrer in the months of October and December, respectively. The cycle will conclude in January 2023 in the city of Alicante.

'Climates for Change' is the name given to this cycle and is included in the framework of the initiative that Hidraqua has launched in 2022 as a leading company in the fight against the climate crisis, in order to create favorable climates that help the institutional sector , business and social to mark a coordinated and joint roadmap that allows facing climate change and its direct consequences in an area so punished by them as is the Valencian Community.

In fact, this initiative was launched by Jorge Olcina, professor at the University of Alicante and renowned expert on climate change. As Olcina pointed out during his presentation, “climate change is unquestionable scientific evidence. In addition, the Mediterranean region is a 'hot spot' for climate change on the planet as a whole, as highlighted by the 6th IPCC Report (2022) and that forces us to adapt the territory and its economic activities to reduce the expected impact of warming climate".

During the presentation of the cycle, Martín Sanz highlighted that "Hidraqua has been implementing policies for years that help curb the climate crisis in which we find ourselves immersed and whose consequences, such as prolonged droughts and intense floods, directly affect sustainable management of the water and the territory that Hidraqua manages in more than eighty municipalities of the Community. That is why we have wanted to take a leap in this sustainability policy and involve the most representative sectors of the region so that they join in a much-needed fight, in this case hand in hand with the AU and within our Alliances policy. based on the SDGs of the 2030 Agenda”.

For her part, the vice-rector for Culture, Sports and University Extension, Catalina Iliescu, pointed out that “this agreement completes the actions we started last year with Hidraqua in the cultural and accessibility field. Now we focus on one of the most pressing concerns of our time, which is the climate crisis.

In Iliescu's opinion, "to deal with climate change, it is necessary to join efforts from all of society and the cycle that we present together with Hidraqua is a good example of this with experts from different fields who will analyze and offer keys that should help us launch initiatives that contribute to alleviate the climate crisis that affects the entire planet.

Larissa Timofeeva, director of the University Extension Secretariat, referred to the "Climate for Change" cycle as "an opportunity to give a voice to experts from different sectors in relation to climate change" and stressed that "the headquarters of the University of Alicante offers us an ideal platform to take this message to all corners of the province».

1 Intellectually disabled people will do internships... 2 Cases of monkeypox in Madrid rise to 275 after adding... 3 The Diputación de Salamanca promotes the Camino de... 4 The reform of the civic center of Palomarejos is awarded... 5 They develop a new intelligent parapet that warns... 6 One of the 10 most wanted fugitives arrested: a moonlighter... 7 Israeli PM Bennett snaps UAE visit amid standoff Iran... 8 The ECB will end its asset purchases in July and anticipates... 9 Brazil sends helicopters in search of 2 missing Amazonian... 10 Young people will not be able to spend the cultural... 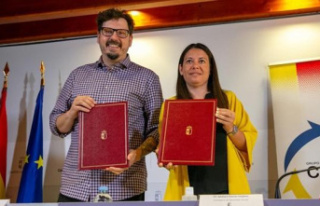 Intellectually disabled people will do internships...