On a sunny and quite pleasant morning, the eleventh day of the Spring Season was held at the Madrid Hippodrome, with a large audience, which greatly enjoyed the San Isidro Festival, the emotion of the horse races, the spectacle and gastronomy. 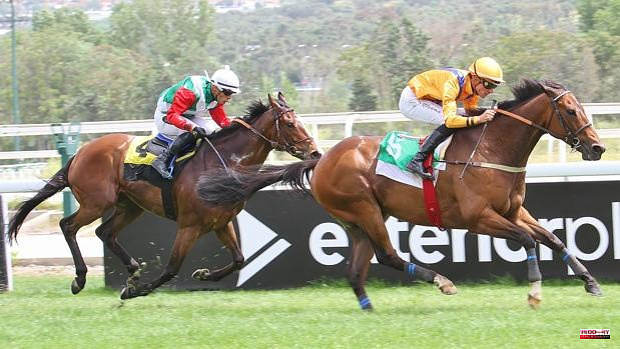 On a sunny and quite pleasant morning, the eleventh day of the Spring Season was held at the Madrid Hippodrome, with a large audience, which greatly enjoyed the San Isidro Festival, the emotion of the horse races, the spectacle and gastronomy.

The morning began at 11:30 am with the first race PREMIO PRECOZ, (Claim) for two-year-old colts and fillies. seven participants. 1,000 meters of travel. Chispa was far superior to his rivals, controlling the situation with 500 meters to go and with a nice change of pace he went towards the finish line with great authority, winning by five lengths. Second was Astuto, being third, two lengths behind, Sweet Baby.

In second place, the KING FROG AWARD was disputed, for three-year-old colts and fillies that had not won. Eighteen specimens at the 1,600 meter pole. Great Belgian made a big impression with his victory. He was always in the back, waiting for his moment in the final stretch to present his attack, finding space on the outside, coming with great strength and class to achieve victory with authority. The rookie Nazira also surprised with a good finish, taking second place. Third came Saslong.

The third race was the MARCOS CARRASCO AWARD, a reference handicap for horses and mares four years of age and older, over a distance of 1,800 metres. Eighteen participants in the starting boxes. Rumbo was always well placed during the course and when he entered the final straight he was third, presenting his attack by the sticks, he went easily towards the finish line, achieving a comfortable victory by two lengths. For second place there was a nice fight between Bidul and Atlántico, finally being for Bidul by only one head of difference.

In fourth place was the SAN ISIDRO AWARD (Lototurf), a test of great interest as it was preparatory, for the Urquijo Grand Prix, in which the best sprinters gathered over the distance of 1,200 meters in a straight line. Nine candidates for victory. Great Prospector proved again that he is our best Sprinter. A year after repeating victory at the San Isidro Prize, he reappeared with doubts about his form, but without being one hundred percent, he did it again, repeating the victory for the third time. Great Champion. Feints recovering sensations was a very good second, with Stoweman third.

In fifth place was the AEGRI AWARD - “CUP OF SPAIN AMATEURS” reserved for Amazonas and Gentlemen, for horses and mares four years and older, over the distance of 2,000 meters. Eleven contenders for victory. As soon as the drawers were opened, Capercaillie lost all his options when he was unrestrained. On the other hand, the race was a true Hades ride. He took the lead coming out of the first corner, setting a strong pace, reaching the final straight, to go easily towards the goal post winning by more than eight lengths. Great ride by Claudia Tena winning the Spanish Cup of Amateurs. Second came his patio partner, Baba Karam, who well withstood Philau's final attack, which came third at mid-length, from Einar and The Game, who reached a head and neck respectively.

The sixth race was the PREMIO NOUVEL AN, sponsored by Vinos Cría Cuervos, for three-year-old colts and fillies who did not win a prize of €21,000. Six specimens started from the 1,800 meter pole. Beautiful race in Nasab and Glorytof gave us a very exciting final stretch fighting head to head for victory. Finally for just one nose, the glory went to Nasab. Third, a body behind, came Sanpedro.

He closed the morning in seventh place, the JOSÉ ANTONIO RODRÍGUEZ PRIZE, handicap for three-year-old colts and fillies, not winners of a prize of €15,000. Five Participants. 2,200 meters of travel. Tritón won from end to end in a spectacular ride by more than eleven lengths over the second at the goal post. Great ride from his jockey, Julia Zambudio. Second was Vinci Lisa, third being a body behind, Tayrona.

1 IOC threatens to drop out of the Olympics: Russian... 2 [IN IMAGES] A pedestrian hit by a tanker truck in... 3 The author of the racist massacre in Buffalo radicalized... 4 A walk in the park for Canada 5 UNFP trophies: eagerly awaited, Mbappé will be the... 6 Tennis: unbeatable, Iga Swiatek wins in Rome and wins... 7 The fire of a hospital center in Arévalo forces the... 8 Success of the Toledo Book Fair with more than 32,000... 9 A TV evening in Kyiv: lights off, ESC on, air raid... 10 New record for the compensation of major American... 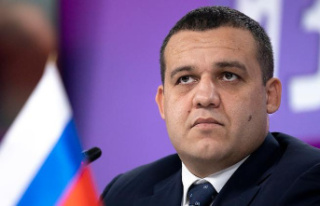 IOC threatens to drop out of the Olympics: Russian...