The President of the Government and that of the Generalitat have coincided today in the delivery of the Pimec employers' association awards in Barcelona. 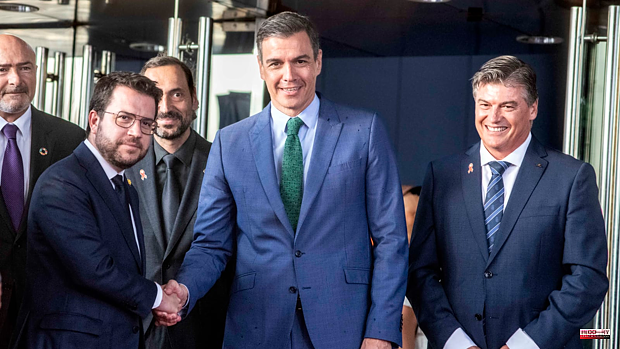 The President of the Government and that of the Generalitat have coincided today in the delivery of the Pimec employers' association awards in Barcelona. A brief meeting, just a fleeting exchange of words, before in a few weeks or days - on a date yet to be specified - the meeting takes place that must symbolize an apparent thaw after turbulent months due to the Pegasus case. In fact, and on the night before the opening of the NATO summit in Madrid, Pedro Sánchez's intervention, nothing else was expected, had an eminently economic content.

On the Camp Nou stage, on the same lawn, Pere Aragonès and Pedro Sánchez sat next to each other, in an apparently cordial meeting, the same tone as that just after the Pegasus case broke out in another economic forum in Barcelona, in that case the Circle of Economy.

Both sources from the Presidency of the Generalitat and the Sánchez Executive have specified to ABC that, in fact, Sánchez and Aragonès have not had the opportunity to speak alone. They did share in a larger group that included, among others, the mayors Ada Colau and Núria Marín, the minister Raquel Sánchez and the president of Pimec, Antoni Cañete. In no case, they have added, has the political situation been addressed, but rather the economic consequences of the war in Ukraine.

In his speech, and on behalf of the small and medium-sized companies of Catalonia, Antoni Cañete has demanded before President Sánchez a more favorable legislation for some firms that employ 75% of the workers and that contribute 62% of the GDP. In this context, Cañete has appealed to a historical claim, that of the representativeness of SMEs in social dialogue. “President, we will not have completed the democratic transition until SMEs are not represented with their own voice in the social dialogue”, he added.

The president of the Generalitat, during his speech, has claimed the role of small businesses and the role of Catalonia as a land for the development of corporations. The extension until 2030 of the link to the Mobile World Congress has been valued by the Catalan president, in the same way that he has valued social agreement and would undertake it as essential elements for progress.

In the only allusion that has been read in a political key, and before Sánchez, Aragonès has raised the flag of the infrastructure deficit, one of the great classics of the denounced Catalan grievance and that, in part, explains the 'procés'. “There is chronic underfunding and chronic underexecution. That's what we have to talk about." Aragonès has claimed in this sense the creation of a "mechanism" to guarantee the execution of what was budgeted: "We are committed to the works of the Generalitat". Aragonès has specifically complained about the 'insufficient' Cercanías service or the slowness in the execution of the Mediterranean railway corridor.

For his part, and beyond generic allusions to "dialogue" ("I am a firm believer in dialogue, and out of necessity and conviction we have done it in recent years"), Sánchez has claimed the internal unity of Europe as a form of to respond to what he has defined as external challenges, alluding to the warlike aggression in Ukraine, a unity, he recalled, which was demonstrated with the unitary purchase of vaccines or the mutualization of debt.

On the same plane, he has valued the 15,000 million euros put by the Government to try to "muffle the echoes of the crisis derived from the war". At the end of his intervention, and without waiting for dinner, Sánchez left the act, at which point Aragonès accompanied him to the exit. For her part, the mayor of Barcelona, ​​Ada Colau, has taken advantage of her intervention to demand an investigation into the events that occurred at the Melilla border.

On the same day, hours before, the president of Fomento del Trabajo, Josep Sánchez Llibre, defended a "common policy" in the cultural, gastronomic and tourist fields, among others, between Barcelona and Madrid, which will be set at a summit that has advanced that the employer will celebrate in the Spanish capital.

He said this at the presentation of the annual Medals of Honor of the Catalan employers and the XV Carles Ferrer Salat Awards, this Monday, Business Day, in which the President of the Generalitat, Pere Aragonès, took part; the President of the Parliament, Laura Borràs; and the Minister of Business and Labor, Roger Torrent.

Sánchez Llibre has insisted that the municipal government of Ada Colau in Barcelona is committed to maintaining "a policy of decrease, the policy of 'no'", while Fomento del Trabajo defends promoting the city from the point of view of growth.

The employers' association has awarded its Medal of Honor for professional career to the president of Automobile Barcelona, ​​Enrique Lacalle, and the Medal of Honor for the businessman of the year to the CEOs of Grifols, Víctor Grifols Deu and Raimon Grifols Roura.

1 'Erató Fest' celebrates its fifth anniversary... 2 Cobadu celebrates its 40th anniversary with a record... 3 Things to keep in mind when choosing a master's... 4 Rebellion in the CGPJ: Lesmes is forced to respond... 5 An alternative for every moment of the professional... 6 Rozalén will be the announcer of the Albacete Fair 7 Cuenca devises the first festival with heritage as... 8 José Lloréns wins the Spring Salon Painting Medal... 9 Johnson advances his law to unilaterally modify the... 10 The most beautiful places in Villaviciosa are filled... 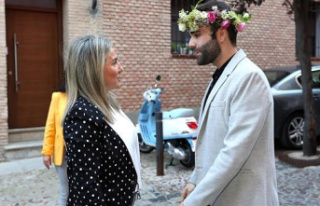