The gesture was carried out by the former chief prosecutor of Barcelona Anna Magaldi who, this Monday, after leaving the conference given by Manuel Marchena at the Illustrious Bar Association of Barcelona (ICAB) dedicated a comb to the protesters who had rebuked her shouting "fascist". 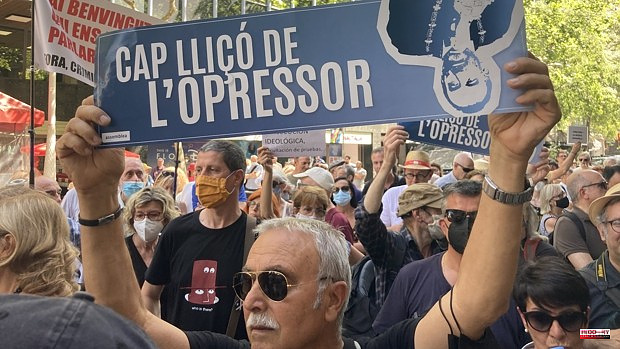 The gesture was carried out by the former chief prosecutor of Barcelona Anna Magaldi who, this Monday, after leaving the conference given by Manuel Marchena at the Illustrious Bar Association of Barcelona (ICAB) dedicated a comb to the protesters who had rebuked her shouting "fascist". The magistrate of the Second Chamber of the Supreme Court has given a talk on artificial intelligence and criminal proceedings, and at the gates of the building, summoned by the ANC and Òmnium, some 200 people to protest against his presence in the Catalan capital.

Marchena signed the sentence against the leaders of the 'procés' and the independence movement wanted to show off muscle in the street to receive it, although the reality, as in recent months, has been a low influx of concentrates to rebuke the magistrate on Mallorca street - where there is also the Government Delegation.

For the most part, retirees, who carried stellar flags and banners that read: "Marchena, guarantor of the violent dictatorship of Spain", or "No lesson from the oppressive state", with the image of the judge upside down. The Mossos d'Esquadra -both members of the ARRO and the Brimo- have deployed a security cordon at the gates of the ICAB, where no incident has occurred.

In fact, the agents have not even put on their helmets and have maintained the line without any difficulty during the more than three hours that the concentration has lasted. Marchena was already inside, and she has not had to listen to the insults that other conference attendees have received. "They are not jurists, they are fascists" or "rats out", who have endured, among others, the lawyer José María Fuster-Fabra, and the lawyer and councilor of Cs Sonia Reina.

What the magistrate has experienced, already inside the ICAB, is how a group of pro-independence lawyers, grouped under Juristes de Catalunya, has unfurled a starry flag at the beginning of his talk, to then immediately leave the room. There were about 20 of the total of 200 attendees, some of whom stood up to applaud Marchena, upon witnessing the excess.

In the middle of the street, the pro-independence entities have planted a large screen on which they have projected images of the actions of the Police during 1-O, but not even the demonstrators have come close. There, the president of Òmnium, Xavier Antich, who has branded the Supreme Court's ruling as "repression", and also his counterpart in the ANC, Dolors Feliu, who has reproached the magistrate for the fact that said videos were excluded from the trial.

Thus, at seven in the afternoon, after several moments of folkloric display by the protesters, who have sung usual songs at these events -from 'Els Segadors', 'L'Estaca' by Lluís Llach to 'Bella Ciao'- , culminated a protest that confirms the decline of sovereignty when it comes to taking to the streets. Marchena had already left the building, without any incident being recorded.

1 La Tarxeta Básica, the new ariete of the opposition... 2 The daughter of the former president of Angola denounces... 3 Fire in Venta del Moro: the Generalitat Valenciana... 4 Marshall plan for Ukraine will include anti-corruption... 5 Badosa: "No one likes to be on center court for... 6 Pope defies resignation rumors and hopes to visit... 7 Hezbollah drone provocation is criticized by the Lebanese... 8 Sánchez takes the first step to increase investment... 9 End to hell squat of Blanca and Miguel: the sick marriage... 10 Ukraine creates a $750B "recovery plan"... 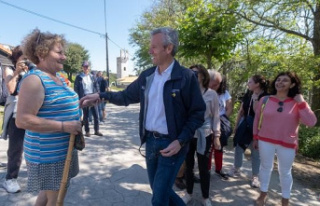 La Tarxeta Básica, the new ariete of the opposition...