Day of decision: What's next for Frankfurt's Mayor Feldmann?

What's next for Frankfurt's controversial mayor Peter Feldmann? In the Main metropolis, more than half a million people are called on today to vote on voting out the SPD politician.

What's next for Frankfurt's controversial mayor Peter Feldmann? In the Main metropolis, more than half a million people are called on today to vote on voting out the SPD politician. The 64-year-old has been under pressure for many months.

He is currently in the dock of the Frankfurt district court on suspicion of corruption, and he has repeatedly slipped up. He let the calls for his resignation fade away, he did not accept being voted out by the city councillors, which is why the citizens are now asked.

At least 30 percent required for deselection

In order to vote Feldmann out, a majority must vote against him. However, this must account for at least 30 percent of those entitled to vote - a high hurdle for a local election. In 2018, for example, the total participation in the runoff for Feldmann's re-election was 30.2 percent.

In contrast to other votes, the citizens' office for elections will not announce any interim results on the turnout over the course of Sunday. This is to rule out any influence, it said. There was also no information on the status of the postal vote in advance.

The first results from the voting districts are expected from 6.30 p.m. Then the Frankfurt political scene will gather in the Römer town hall to make statements. It was initially unclear whether the mayor himself would be there. It was announced on Tuesday that he had tested positive for Corona. In addition, he did not appear for a trial date last Monday, according to the certificate because of a "mental state of emergency".

Even the SPD is demanding resignation

Since this summer at the latest, almost all parties in Römer have been demanding Feldmann's resignation, even his own - the SPD. But what exactly is it about? The mayor is charged with suspected acceptance of an advantage. It is about his close ties to Arbeiterwohlfahrt (Awo). Feldman denies the allegations.

He also gambled away sympathies, for example when he knocked out a sexist slogan at the expense of the stewardesses on an airplane and snatched the Frankfurt Eintracht European Cup in the Römer. The Eintracht leadership then declared him an undesirable person in the stadium. And recently he caused criticism in the court again: In a statement read by his lawyer, it was said that he had married his wife because of an unwanted pregnancy. He later apologized to his daughter for the passage about his view at the time that the child should be aborted better.

For weeks, Frankfurt's city politicians have been campaigning for votes against Feldmann. For this purpose, the coalition partners Greens, SPD, FDP and Volt have exceptionally joined forces with the largest opposition party, the CDU. Around 250,000 flyers and 12,000 posters were printed, and pub crawls, home visits and information stands were organised. "We want to restore the dignity of the city," said CDU district chairman Uwe Becker.

Meanwhile, representatives from the left spectrum emphasize that he has done a lot for the city. Feldmann primarily took up the cause of social issues, such as more services for families, affordable housing or the fight against aircraft noise. In the pandemic, he rejected tax increases.

It has only been the case in Hesse since 1993 that mayors are elected directly by the people and not by the respective municipal council. Since then, a mayor can only be voted out of office by the citizens. According to the Hessian Association of Cities, such a deselection is extremely rare. The most prominent case was Margret Härtel (CDU) in Hanau: After allegations of accepting advantages in office, she was voted out of office in 2003 with 89.5 percent of the votes. Haertel defended himself legally, but the administrative court in Frankfurt dismissed the lawsuit. 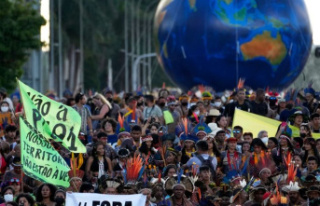 Brazil: Indigenous people call for protection of the...