The faithful 'dawners' dress in 'surrealism' in the Sierra del Segura 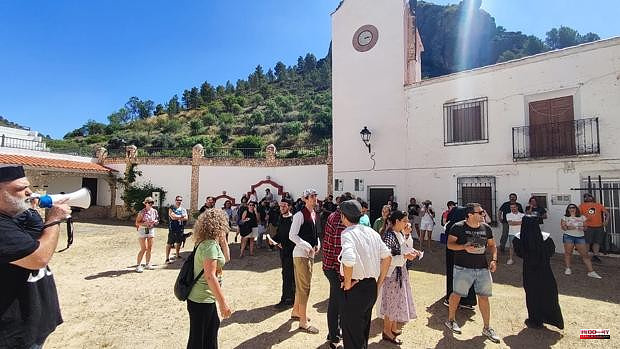 Preparations began two years ago. Exactly since 2020 because the amanecistas stayed 'planted' as it happened in several scenes of the movie 'Dawn that is not little', due to the arrival of the Covid-19 pandemic. Since then, Juan Ángel Martínez, 'the depressed child', has gone from 'being contingent to being necessary', since apart from managing the website and networks of the 'Association of Amanecistas' —which has 60 members—, He is one of the promoters of the annual get-together, which has returned this year to recover each sequence of one of the most important films and which marked a before and after in national grotesque surrealism.

Juan Ángel Martínez remembers his time on this film, which director José Luis Cuerda from Albacete shot in three towns in the Sierra del Segura (Ayna, Liétor and Molinicos) for six weeks.

«I received lessons from the sacristan —Manuel Aleixandre— to ring the bell. "So so. Take a good look. Good distance of hands, neither too much nor too little. So, so", said Aleixandre (Paquito in fiction), who after noticing that one of the children was dozing, reprimands him: "If you don't write down, how are you going to memorize me later?" that the councilor of Ayna replied: "Yes, I am depressed."

And it is that Juan Ángel Martínez was not only one of the 'extra', but now occupies the municipal chair of Ayna (640 inhabitants), which he arrived with the acronym of the Popular Party. This year and, after two years of hiatus, he is happy for the arrival of the 'dawners'. And he acknowledges that the devotion and fervor that Cuerda's film arouses is so great that the occupancy figures "have exceeded expectations" this weekend.

Whether for having participated as an 'extra' or for having been present at the filming, each one of the inhabitants of these three municipalities feels proud of the recognition they receive thanks to the ingenuity of the director of 'El Bosque Animado', 'La tongue of the butterflies' and that attracts thousands of tourists to the Sierra del Segura. Juan Ángel repeats that aspects of everyday life are not only reflected in the feature film, there are also those faces and the names that the 'dawners' are going to repeat this weekend: Venerado, Abundio, Abilio, Petronila and Abundia will walk this weekend weekdays through the white streets of these municipalities, a symbol of the emptied Spain.

The festival —recalls the mayor of Ayna— began with a communal dinner followed by games —the Trivial Dawn could not be left out— and also music. For the visit to Molinicos, the attendees have met in the Plaza Vieja, in order to tour the town to find the street through which Jimmy and Teodoro arrive and then end up in the house where the interiors of the town hall were filmed. Along this route, in addition, recreations of the scenes shot there are made and copies of the script are offered to the bravest.

To help with the re-enactments, this year they are accompanied by Paranoia Studi, a theater group from Castelldefels (Barcelona), directed by Carmen. For today, the appointment will be at the 'Dawn, which is not little' Interpretation Center, where José Luis Cuerda will be honored. The event will end with a tour of the hotbed for men, the terrace where Mariano and Uncle Pedro are born, the tavern outside and inside, or the passageway through which Elena is going to work.

1 They arrest a man for burning ten vehicles and puncturing... 2 Iran hostage Emad Shargi's Family appeals to... 3 Biden administration cancels $5.8 billion in student... 4 How medieval cathedrals were constructed 5 Nadal against his student at the 14th Roland Garros... 6 Broadcasting pirated soccer will not result in more... 7 The Ibex increases 1.5% and reaches its highest annual... 8 Can an increase in interest rates solve the inflation... 9 Sanctions against yachts, planes and elites connected... 10 New restrictions are being called for by the Supreme... 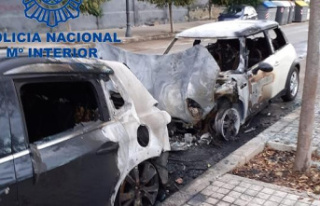 They arrest a man for burning ten vehicles and puncturing...