Secu: the Court of Auditors questions the sharp reduction in the deficit

The government has overestimated the losses of Social Security in 2020, to better collect the unpaid in 2021 and post a sharply declining deficit, said Tuesday the Court of Auditors, which refuses to certify part of the last financial year.

The government has overestimated the losses of Social Security in 2020, to better collect the unpaid in 2021 and post a sharply declining deficit, said Tuesday the Court of Auditors, which refuses to certify part of the last financial year. The calculation of Social Security revenue over the past two years "does not give a true picture of the deficit and its evolution", indicates the Court in its annual report of certification of the accounts.

At issue: the contributions of self-employed workers, whose installments had been “halved” at the start of the health crisis, resulting in a “reduced amount” of resources in 2020. But “following the adjustments made in 2021” , the result was “symmetrically” “increased” by 5 billion euros, which should have been attached to the previous year.

It would therefore have been necessary to reduce the historic deficit of 2020 by the same amount (-38.8 billion) and to widen in the same proportion that of 2021 (-24.4 billion), even if it meant assuming a less spectacular “recovery”. “This request was not followed” by the government, which “affects to a very significant extent the very reading of the Social Security accounts”, deplores the Court.

As every year, the report also points to an upsurge in “errors” in the reimbursement of health costs, for a cost estimated at at least 2.5 billion euros in 2021, “mainly to the detriment of health insurance” . Same trend for benefits paid by the family branch – in particular the RSA, the activity bonus and housing aid – for a total estimated at 5.3 billion. Only the pension funds are doing a little better: the share of new pensions “affected by at least one error of financial scope” fell from 16.4% to 14%.

1 Hotel overnight stays almost quadrupled in April due... 2 The Provincial Historical Archive of Toledo celebrates... 3 Premier League: 'There is no shame in talking'... 4 A 43-year-old man collapses and dies in the middle... 5 The dangers hidden in the Galician countryside 6 Sergi Pàmies: "In the nineties you could do... 7 Sánchez is entrenched in optimism: "We are containing... 8 Spanish hotels added 25 million nights in April, six... 9 Summer camps: a deficit of animators which reinforces... 10 Pollen allergy: these apps that help identify areas... 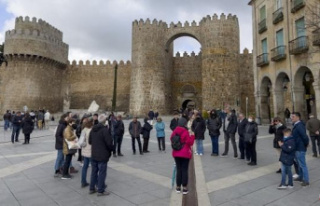