Forest kindergartens are trendy: where children can romp outside in any weather

Learning outdoors, doing handicrafts and discovering nature: forest kindergartens make all this possible and are trendy. 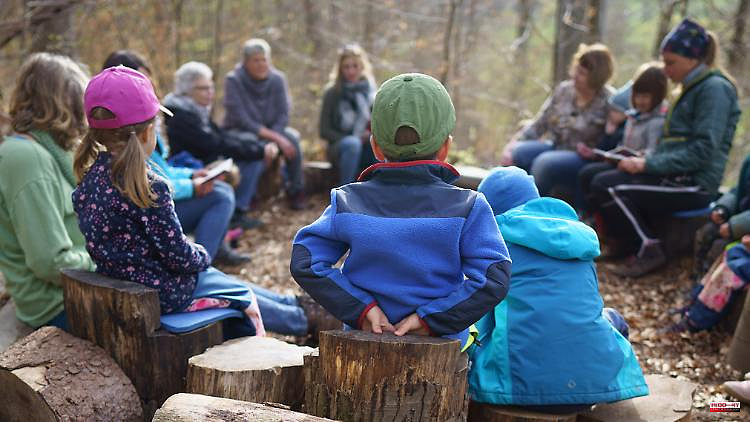 Learning outdoors, doing handicrafts and discovering nature: forest kindergartens make all this possible and are trendy. Running around in the fresh air also reduces the risk of infection during the pandemic.

Morning round on top of the hill: The area is covered with fallen leaves. The children teeter impatiently on tree trunks that serve as a seat. The teacher greets everyone in the circle and wants to read a story. "Do you want to?" A loud "Yes!" echoes through the forest between the chirping of birds.

In forest kindergartens like here in Büdingen in Hesse, children spend an immense amount of time in nature, and such facilities are becoming increasingly popular throughout Germany - especially in Corona times. The little ones are now listening to the story with rapt attention. Some children are new to the forest kindergarten called "The Freshlings" and they look curiously at the faces of the others. "The family can also come and have a look to get used to it," says manager Jutta Schaffert. But the children quickly got used to the environment.

After the end of the morning circle, the last instructions follow, shortly afterwards all the children jump from their seats and spread out in the forest - the romping can begin. Schaffert has known the forest kindergarten since it was founded in 2001. Like most of them, it arose from a parents' initiative. The former nurse and mother of three children decided to remain faithful to the kindergarten and trained as an educator. The 56-year-old has been part of the team since 2012.

The concept of forest kindergartens comes from Scandinavia, with Denmark in particular being a pioneer. According to the Federal Association of Nature and Forest Kindergartens in Germany (BvNW), there are around 2,000 such facilities nationwide, four years ago there were around 500 fewer. According to the Ministry of Social Affairs, around 160 of the approximately 4,500 day-care centers in Hesse are forest or natural kindergartens.

At least two specialists and one intern look after the children between the ages of three and six for the newcomers. However, this is only the minimum. "Basically, a lot more staff would be useful and desirable," says Gisela Stoll-Krohn, chairwoman of the state association of nature and forest kindergartens in Hesse. It does not necessarily have to be highly qualified forest educators. One additional specialist is enough to strengthen the group.

The special thing about the forest kindergartens: The children are in the fresh air in all weather conditions. This also strengthens the immune system. The group hikes through the forest twice a week. According to Schaffert, the children love to build tipis from branches lying around. The educators also teach the kids to keep their environment clean. Therefore, rubbish lying around is collected. They also do this several times a year during clean-up campaigns.

The group only retreats to their small hut if there are storm or thunderstorm warnings. This is a converted red wagon for the newcomers. There you will find a change of clothes, games, handicrafts and books. "Other than that, we're outside in wind and weather," explains Schaffert. "Even in winter, but not for quite as long." You don't need much for this: warm clothing, weatherproof shoes, hat and scarf for the cold season. Away from the playing children lies a small red box with a hole. It serves as a kind of toilet for the children. Parents had asked for a mobile toilet cubicle, reports Schaffert with a smile. The compromise with the small box now offers the girls the opportunity to sit down when they feel pressured.

It went without a toilet for more than 15 years. "We then hid something similar further back in the forest, where holes are dug in the ground for the big business." According to Schaffert, the fact that there is a public wildlife park nearby, which attracts many people in summer, also spoke against Dixi-Klos. When the weather is good, the risk of drunk teenagers trashing or knocking over such a toilet is too great. That's why we decided against it.

Basically, the children play with everything the forest has to offer. Some make mandalas out of leaves, sticks and stones, others use tools. There are rounded carving knives. Saws and hammers can also be used. It is important that children learn from their mistakes.

Basically, very few accidents happen in the forest, as the Federal Association of Nature and Forest Kindergartens emphasizes on its website. Thanks to the many activities in the great outdoors, children become more secure in their motor skills and learn to assess challenges better. "You walk more safely over uneven ground and don't trip over every root," the association said. In addition, the children's perception of the special conditions of the forest improves and they learn to assess their own limits.

If children climb a tree with the Büdinger offspring, they do it alone. "That's the only way they'll learn how to do it," says Schaffert. The worst thing in 20 years was a broken arm. Schaffert says parents consciously send their children to forest kindergartens. In the meantime, the children have settled down comfortably. You eat - and listen to the chirping of the birds and the rustling of the leaves.

1 Ukrainian mothers at war: "Not alone, even if... 2 Bombs, flight, expulsion: fears are awakened in the... 3 The woman at the grill: onion cake - nice and juicy 4 New rule for surnames: Italy's mothers are more... 5 On blankets and by candlelight: having a child in... 6 As important as medication: Activation can help people... 7 The President and the Government of Finland approve... 8 "Bye bye, beige!": Greta Silver redefines... 9 From the sulky corner: You want total special ops? 10 Non-Violent Communication: Education is also possible... 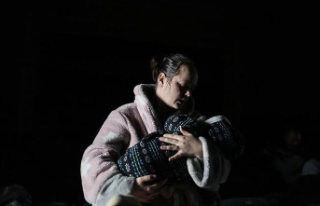 Ukrainian mothers at war: "Not alone, even if...