Soccer elevated to religion, to a configurator element of a city, has these things. 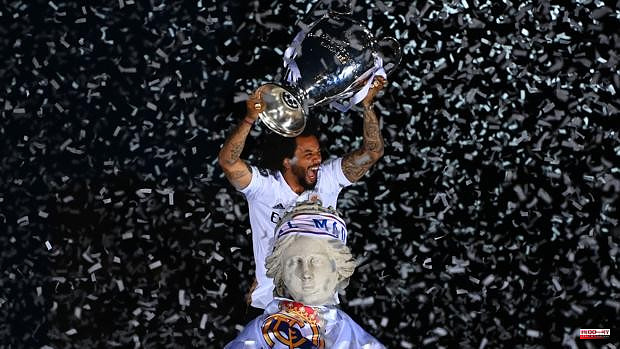 Soccer elevated to religion, to a configurator element of a city, has these things. The tradition, the customary of offering the Patron Saint and the Authorities a victory that is not just a victory. A victory that if on Saturday filled the streets and emptied them for an hour and a half, on Sunday it has filled them with white. And not of that First Communion white of a May that leaves us with victory in Paris, but of the Madridista white that is also an entry into another Heaven. That is why Paco came from Quismondo, province of Toledo, with the Suker elastic with more washes than recommended and a cap that is no longer seen with its corresponding mass of euphoric sweat from other Leagues and other European Cups.

Because Real Madrid involves miles, and if "we couldn't go to Paris, here we are." Paco had his reasons, with small brown-skinned eyes and outside the perimeter, yes, of the Cereal Goddess: in that area of ​​the Capital where money, the Army, municipal power and even Mythology make a place. An air that was fire ran through Cibeles, and Loretta, from Milan, gave sun cream to her friends in spray. Benzema behind him, and the sun of Castilla, the afternoon sun, shining at the time they say UVA rays are losing intensity.

Celebrating Real Madrid is not only going to Cibeles, despite the fact that it is the epicenter of everything celebrated and everything to celebrate. They are also the Pakistanis with their frozen cans and unexpected sympathy on their faces. As if asking for a dribble and stuck, the alleged Pakistanis, in those human corners where the Police do not enter for a mere matter of chance, probability and letting do. There was another matter in the wait, which has already been told that the wait, the sun and the moon, make Real Madrid great. That question was what to do with the children who, shortly before the pandemic, were running the hall and had their father fried. "He is very good around the house, but so many people make him nervous." And the child, baptized as Iván, wanted to escape with a smile and various contortions of his father's hands. Alaba tapped on the window of the bus, and Iván kicked his father's rib cage.

Also dark circles. Many. Those of Salva and his friend Raulico, who came from Granada, on Saturday, in a "Peugeot van without air and full of crap." Seeing how they talked about transport, it is understood that they parked far outside of Madrid, that the 'coffee machine' that had brought them must not be very friendly to the environment and the non-existent pollution that the city asks for.

The time was asked of a 'madero' who was suffering from the heat in uniform, and he replied in celebratory Andalusian that he "is neither God, nor Ancelotti, nor the bus driver". Good for his character.

Further on, a trumpet enlivened with the chords of the original hymn. But she was not seen to tell this newspaper about her meringue melomania. And also foreigners, such as Lázaro and Gonzalo, who arrived from Zaragoza «in three hours, for thirty euros of gasoline» and both with Benzema's shirt.

And with a delay Madrid arrived at Cibeles, Almeida received them, and they took a tour of the Pasaje de la Luz. Perhaps for CNN to take a close-up of the European Champion and the city. While waiting, in the long wait, parents nursed children, others did not. There was a digital blackout in Cibeles and mosqueo in the respectable. They had 14 on their backs. People went from the heart to their business. Five hours in the sun well deserve a Champions, and vice versa.

PS: The anger of the taxi drivers on Saturday changed to a half smile because, days of media visibility, everything has to be protested. Go to Mbpapé and ask for the Ballon d'Or for Benzema. And Marcelo's triumphant hoarseness.

The masses headed for Chamartín. Or to the Monday that waits. It sounded about Queen, that extended happiness is not a virtue either. Just a few global chords.

1 Real Valladolid beats Huesca and takes the pass to... 2 Legislative: There are some hiccups with the vote... 3 Ukraine: The 27 countries studied the exemption of... 4 The man who brings back to life the 'giants'... 5 WEATHER REPORT. Bad weather in Isere: 8,000 customers... 6 Ligue 1 Ligue 2 play-offs. AS Saint-Etienne is relegated.... 7 The good side of Courtois: his private chef, Luis... 8 The last salute to the champions: tribute in the Madrid... 9 New outbreak of violence in French football after... 10 Innovation in the classroom exceeds its limits and... 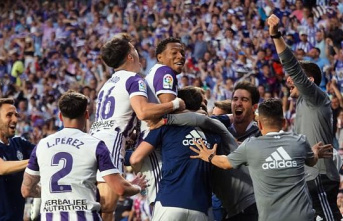 Real Valladolid beats Huesca and takes the pass to...