«Fortune is guiding our things better than we could wish for; because you see there, friend Sancho Panza, where thirty or a few more outrageous giants are discovered, with whom I intend to do battle and take away everyone's lives, with whose spoils we will begin to enrich, that this is a good war, and it is a great service to God to take away such a bad seed from the face of the earth. 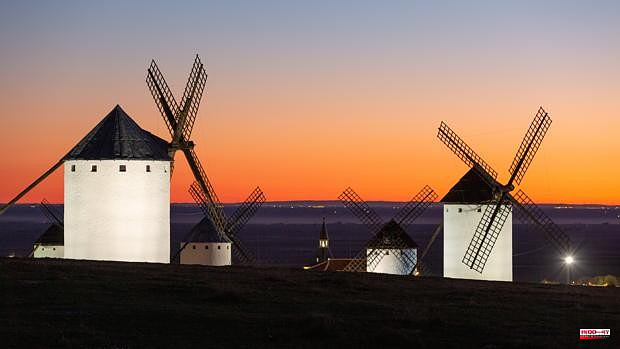 «Fortune is guiding our things better than we could wish for; because you see there, friend Sancho Panza, where thirty or a few more outrageous giants are discovered, with whom I intend to do battle and take away everyone's lives, with whose spoils we will begin to enrich, that this is a good war, and it is a great service to God to take away such a bad seed from the face of the earth.”

We could never put this famous phrase, which Don Quixote releases to Sancho at the beginning of the eighth chapter of the first part of the novel written by Miguel de Cervantes, into the mouth of the protagonist of another beautiful story; the one starring Juan Bautista Sánchez-Bermejo. Originally from Campo de Criptana (Ciudad Real) and born in 1980, this 42-year-old from Criptana is the one who gives life, precisely, to the windmills that the ingenious hidalgo from La Mancha mistook for giants.

He was almost predestined to dedicate himself to this trade, since the windmills in his town, according to most researchers, are what inspired Cervantes to set Don Quixote's battle against the 'giants'. Not in vain, as the Marquis of Ensenada's Cadastre assures, in 1752 in Campo de Criptana there were 34 mills registered. Of all of them, ten are currently preserved, three of which are originals from the 16th century (Infanto, Burleta and Sardinero) and the remaining seven (Lagarto, Culebro, Pilón, Cariari, Inca Garcilaso, Quimera and Poyatos) were built by from 1900.

«I was born in the right place to have a direct link with this heritage that is windmills. If I had been born, for example in Seville, I would not have dedicated myself to this, ”this 'giant' surgeon tells ABC jokingly. Juan Bautista's inspiration came from a very young age, since at the age of 16 he began training for two years at the 'Molinos de viento' school-workshop and participated in the rehabilitation of the 'Sardinero' mill, one of the three oldest mills from the 16th century and one of the ten that are preserved in Ciudad Real.

After that time, he went to do a module of professional training in custom furniture and carving at the Antonio Calvín de Almagro Secondary Education Institute, also in Ciudad Real. But he did not finish it because he enrolled in another school-workshop, that of the 'Casa Torrecilla' in his town, where he was hired to make the roofs of this mansion with more than 100 years of history, which is now a tourist accommodation.

From there he took the leap and began to fly on his own, becoming autonomous when he was only twenty years old. And since then he has not stopped repairing mills throughout the Spanish geography. He even has projects outside our borders, such as the rehabilitation of a Provençal mill in the French city of Perpignan, all parked due to the pandemic.

Juan Bautista explains that windmills ceased to be used a long time ago because they were no longer economically profitable, but the goal now is "to transmit to future generations what was a traditional and lost trade in La Mancha, such as milling" . Something that he achieves thanks to another profession like his, since he very often participates in mills that are made in them and thus gives a second life to these machinery that fed many Castilian Manchegos throughout the centuries.

His workshop on Juan Carlos I Avenue, in Campo de Criptana, has already outgrown him due to the volume of orders. Between elements of wood and machinery, Juan Bautista has a shot from there all the towns of La Mancha that have windmills in their heritage offer. The best preserved are those that preserve the original machinery of it, nine in total in the region that rise majestically; as well as in his hometown, in Consuegra, Camuñas, Madridejos, El Romeral and Mota del Cuervo. "Like vehicles registered many years ago, they are a priority and have to pass the 'ITV' more frequently to prevent damage and the loss of original parts," he explains with this simile.

As a good cryptanian, another of the well-kept secrets of this wood craftsman is why the Campo de Criptana mills have 12 windows in their upper part, a greater number than in other places. "This is not by chance," he affirms, since its distribution has to do with the 12 winds located in this town, which he quotes from memory: Midday, Solano Bajo, Solano Hondo, Solano Fixed, Solano Hondo, Matacabras, Cierzo, Moriscote, Toledano, high Ábrego, fixed Ábrego and deep Ábrego.

Juan Bautista considers himself something like one more 'quixote' of the many that exist in La Mancha, since his job is "somewhat romantic and very hard at the same time". «Restoring mills -he warns- has its share of danger; you work at height and with heavy materials in machinery that develops considerable power, which means that any mistake can cost you your life». In fact, he remembers that in 2005 he had a pretty serious accident because a windmill started up without warning when a gust of wind made the blades spin at high speed and moved the entire structure while it was working on the shaft.

But the romance of the profession comes from the fact that, when he began to restore mills, he realized that "the field of mill carpentry was totally abandoned and there had been no continuation of the trade since they were built, only a little maintenance. For this reason, for him, "valuing all this heritage cost a lot of awareness in the municipalities where there are mills", something that he believes he has achieved over the 26 years he has been working with these giants; to whom, instead of fighting against them, he has brought them back to life.

1 WEATHER REPORT. Bad weather in Isere: 8,000 customers... 2 Ligue 1 Ligue 2 play-offs. AS Saint-Etienne is relegated.... 3 The good side of Courtois: his private chef, Luis... 4 The last salute to the champions: tribute in the Madrid... 5 New outbreak of violence in French football after... 6 Innovation in the classroom exceeds its limits and... 7 A reinforced connection between companies and classrooms... 8 The success of double degrees to strengthen employability 9 Aviation pilot, a future career 10 The leftist Petro widely dominates in the first round... 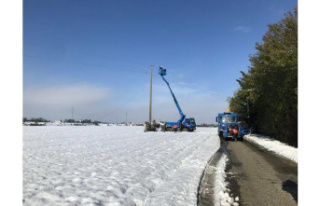