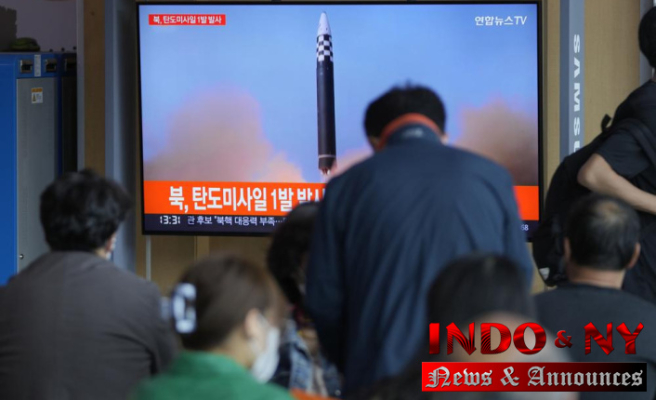 On Wednesday, North Korea launched a ballistic weapon against its eastern waters, South Korean officials and Japanese officials reported. This was just days after North Korean leader Kim Jong Un promised to accelerate the development of nuclear weapons at "the fastest pace possible" and threatened to use them against his rivals.

The Joint Chiefs of Staff of South Korea stated in a statement that the missile originated from North Korea's capital and was directed to the waters off its eastern coast. It called North Korea’s repeated ballistic missile launch "a grave threat" and said it would undermine international security and peace.

According to the statement, Won In-Choul (the South Korean JCS chief) held a videoconference about the launch with Gen. Paul LaCamera (an American general who heads South Korea-U.S. joint forces command in Seoul), and they agreed on maintaining a solid joint defense position.

Japan was also alerted to the North Korean launch, and swiftly condemned it.

"North Korea's series if actions that threaten the peace, safety, and stability of international community is impermissible," Fumio Kishida, Japan's Prime Minister, told reporters during his trip to Rome.

Kishida stated that he will discuss the launch with Mario Draghi, the Italian Prime Minister. He said, "Naturally we will exchange views about the regional situation In the Indo-Pacific, East Asia, and I'll thoroughly explain the reality in the region, including the North Korean missile-launch today, to gain an understanding of the urgent situation in East Asia."

Makoto Oniki, the Japanese Vice Defense Minister, stated that the missile may have hit waters beyond the Japanese Exclusive Economic Zone. No injuries or vessels have been reported to have sustained damage in the area.

It was not immediately clear which missile North Korea launched. According to South Korea's military, the missile flew approximately 470 km (290 miles), at an apogee 780 km (485 miles), while Oniki from Japan claimed it traveled approximately 500 kilometers (310 mi) at an altitude of 800km (500 miles).

According to observers, North Korea's unusually rapid pace of weapons testing this year demonstrates its dual goals: to advance its missile programs and apply pressure on Washington for a deeper freeze in nuclear negotiations. According to them, Kim plans to eventually use his increased arsenal to secure international recognition of North Korea's nuclear status. This would allow the United States to ease international economic sanctions against the North.

An intercontinental ballistic missile capable of reaching all of North Korea's homeland was one of the North Korean missiles that was tested recently. Kim broke his self-imposed 2018 moratorium regarding large weapons tests by launching the missile.

There are indications that North Korea is also planning a nuclear attack at its northeastern testing site. If it happens, North Korea's nuclear bomb test explosion would be the seventh and first of its kind since 2017.

Kim Jong Un displayed his most potent nuclear-capable missiles against the United States during a huge military parade in Pyongyang. Kim spoke at the parade and said that he would continue to build his arsenal at the fastest pace. He also warned that North Korea would use nuclear weapons to protect its national interests.

North Korea has used harsh language in the past to threaten its enemies with nuclear weapons. However, the fact that Kim made this threat and did so in a very detailed manner has caused some security concerns among South Koreans. Experts speculate that North Korea's escalatory nuclear doctrine could allow it to launch preemptive nukes on South Korea, as evidenced by its recent short-range nuclear-capable ballistic missile tests.

North Korea's history includes weapons testing and animosity. Seoul and Washington have established new governments in an apparent attempt to increase their leverage in future negotiations.

Yoon's power transition officer called the latest North Korean missile launch "a grave provocation" and asked Pyongyang not to engage in acts that threaten international peace and tensions. In a statement, it said that the Yoon government would respond strongly to North Korean provocations and work closely with the international community.

Experts believe that the passive handling of North Korea by the Biden administration, which focuses on Russia's invasion in Ukraine and intensifying rivalry against China, is giving the North more space to increase its military capabilities.

Biden's actions against North Korea so far have been limited to symbolic sanctions and open-ended negotiations. North Korea rejected the administration's offer of talks and said it must first abandon its "hostile strategy," a reference to U.S. sanctions and joint military exercises between the U.S. and South Korea.