Prince Harry: He wishes Charles and William "back"

In two interviews, Prince Harry (38) accused Buckingham Palace of standing in the way of reconciliation. In two interviews, Prince Harry (38) accused Buckingham Palace of standing in the way of reconciliation. "I would like my father back. I would like my brother back," he said in an interview with British broadcaster ITV, but the royal family is "not ready to reconcile," said Harry in a trailer for the not-yet-complete published conversation.

The full ITV interview will be shown on January 8th, two days ahead of the release of Harry's autobiography 'Spare'. The book is already said to provide additional explosives for the dispute between the Sussexes and the British royal family.

Prince Harry is not only King Charles III. (74) and Prince William (40) to blame for the ongoing family quarrel, but is also of the opinion: "It never should have happened like this", with all the "leaked" or scattered information. But in the palace they probably felt that it was better to somehow portray him and his wife Duchess Meghan (41) as "the villains".

Harry also recently spoke to US broadcaster CBS about "leaks" and "spreading stories" about himself and his wife. Buckingham Palace did not defend the couple before they resigned as senior members of the royal family and went to the United States "The family motto is, 'Never complain, never explain,' but that's just a motto," he said in a CBS trailer.

Palace officials "literally showered information" on a correspondent, and the articles always said at the end that Buckingham Palace had been asked to comment. "But the whole story is Buckingham Palace commentary," Harry lamented. "So if we've been told for six years, 'We can't make a statement to protect you,' but they're doing it for other family members, there comes a point where silence is treason."

According to British media reports, the book, which follows two days after the interviews, will allegedly not be a harsh criticism of King Charles III. include. Prince William is said to be severely attacked in it. According to The Times, a source said of Harry's work: "In general, I think the book will be worse for her than the royal family expects." Everything will be exposed. "Charles comes off better than expected but it's tough especially for William and even Kate takes a little bit. There's these tiny details and a description of the argument between the brothers. I personally can't imagine how Harry and William are can make up afterwards."

In "Spare," Harry will reportedly write about what it was like for him to always play second fiddle to his brother, according to The Sun. A source told the paper: "At the heart of this book lies a sibling rivalry between little brother and big brother." But the work could soon be followed by the next shock for the royal family.

As the "Daily Mail" reports, Meghan could also plan a book that sheds light on her time in the royal family. A Hollywood agent told The Mail on Sunday: "To be honest, I'd be surprised if Meghan didn't publish her own story. 'Spare' is clearly Prince Harry's chance to tell his, but hers is just as compelling . I mean, how many actresses end up marrying a prince?" Especially if Meghan is aiming for a political career, a book would make sense. 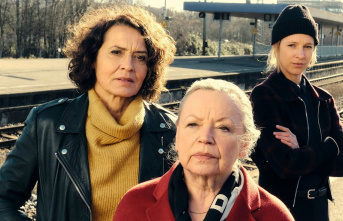