Tractive GPS Dog 4 Tracker: Off the leash: Hope your dog never gets lost with this GPS transmitter

It sounds like a flat advertising slogan, but Martin Rütter is not wrong when he says in the advertisement for the Tractive GPS Dog 4 Tracker: "No matter how good the dog is, there is simply no such thing as 100% security. 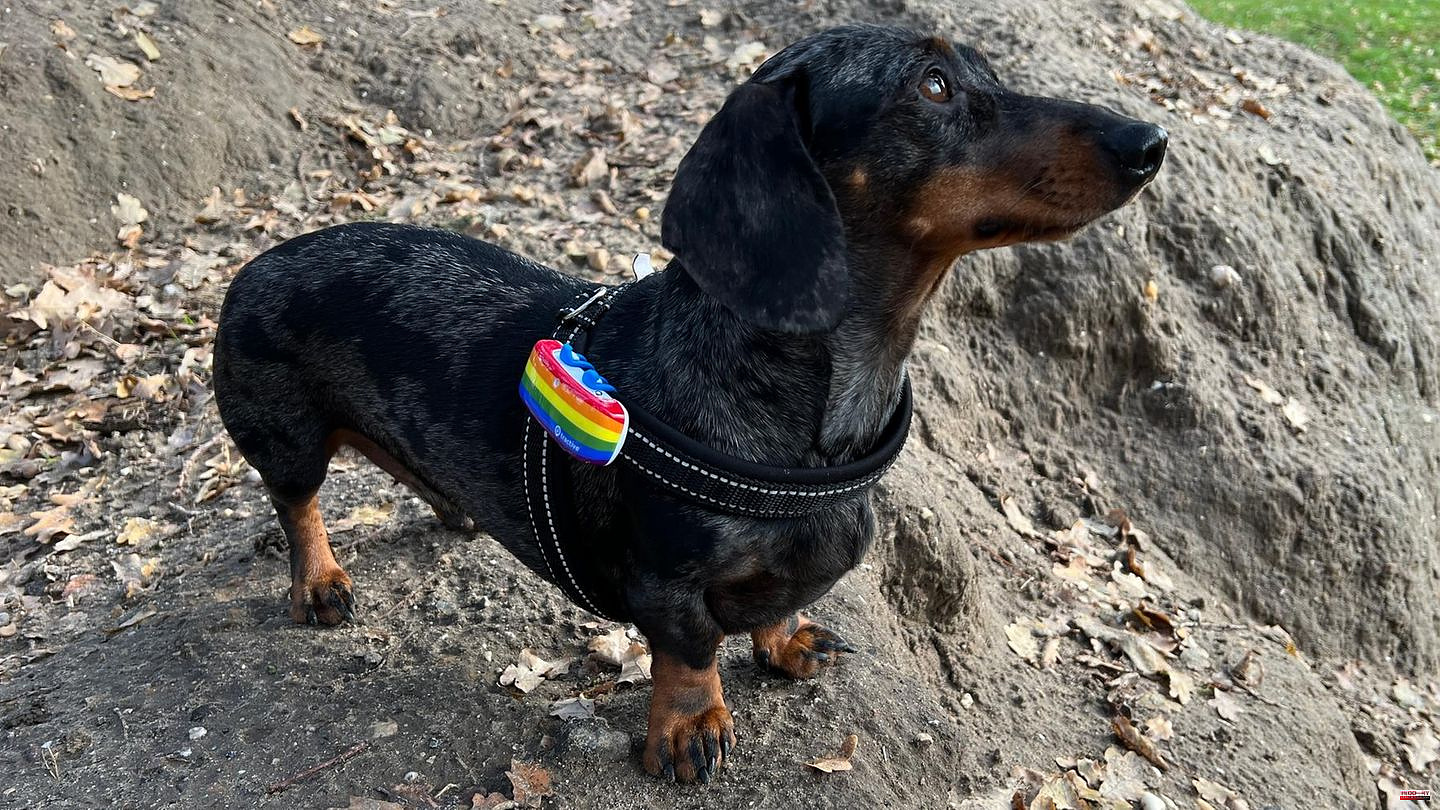 It sounds like a flat advertising slogan, but Martin Rütter is not wrong when he says in the advertisement for the Tractive GPS Dog 4 Tracker: "No matter how good the dog is, there is simply no such thing as 100% security." Rütter is alluding to the danger that even a well-behaved dog can suddenly run away. A good example is star dachshund Harry, who is enormously personal, but thanks to the breed still has a hunting instinct that completely deactivates the dog's brain in mice and other small animals. If you then don't know where the dog ran to, panic breaks out within a few seconds.

Blessed is the one who equipped the dog with a GPS tracker. Just knowing that you can find your dog in no time via an app calms your nerves. And what if it really matters? The test should show whether the Tractive GPS Dog 4 Tracker is a placebo or a panacea - or something in between.

The device itself is unassuming. The Tractive Tracker is a white block measuring 7.1 by 2.8 by 1.7 centimeters (LxWxH). In addition to the tracker, the scope of delivery includes a charging cable for the proprietary magnetic connection and a rubber clip to attach the tracker to collars and harnesses.

The weight with the rubber strap and cover is 46 grams, which was never too heavy or bothersome for star dachshund Harry. The dog weighs almost 7 kilos. Tractive recommends the device for dogs over 4 kg and collars with a maximum width of 2.8 cm. The rubber clip allows you to exceed this a little.

Two things were noticed somewhat annoyingly in the test. Firstly, the charging cable with a magnetic connection means that you can't even quickly borrow any cable when traveling should the GPS tracker run out of juice. USB-C would definitely have been the better choice. At least the tracker doesn't have to be connected to the cable very often, the battery easily lasted over the Christmas period, despite occasional live tracking, which is clearly noticeable in terms of energy consumption.

Secondly, the tracker is quite prone to scratches if the dog likes to move along walls and fences. So the cover makes sense, even if it means a few grams more weight. Be honest: at least it's colorful and makes a small but important statement out of a boring white block.

Charged up and provided with a protective cover, our test dachshund took over the tracker from here. As can be clearly seen in the opening story, the "dog cell phone", as an elderly lady called it on the dog park, immediately catches the eye. So it probably doesn't help against theft of the dog - the tracker is discovered and removed too quickly for that.

During walks, the dog was never bothered by the additional luggage, so the tracker shouldn’t be particularly noticeable with larger dogs. If the tracker is worn all the time, it fulfills two tasks: it can be used to locate the exact position of the dog on walks, and the Tractive GPS Dog 4 Tracker also works as a fitness collar when there is no emergency.

If possible, the device continuously records active minutes and sleep phases, forming a fitness score over time that indicates how active and healthy the animal appears - and how calmly the dog sleeps. Since Harry is not wearing a collar, constant monitoring was not possible for this test - so the dachshund's fitness data is limited solely to active minutes when he is wearing his harness. The app cannot calculate a score because there are no resting phases in the basket at home.

Even so, recording the active time is a helpful indicator of whether the dog has covered enough distance and exercised enough. There is also the possibility to compete with other dogs of the same and different breeds - but this only makes sense if the tracker stays on the collar at all times. Since the start of the test, the "closing the rings" made famous by the Apple Watch has also become common for the dog, which is why it now happens more often that you do a little extra lap in the evening to make the app happy. It can't do any harm.

Much more important than the fitness functions, however, are the possibilities of being able to find the dog when he is gone. There are many reasons for this - it can be firecrackers, other dogs, hunting instinct - or in the case of the stern dachshund: sudden rain. As Rütter already said – there is no guarantee that the dog will not run away.

In this case, Tractive has come up with a number of effective ways to find the animal quickly and easily. All you absolutely need for this is your smartphone and the associated app or a computer with the appropriate login on the website.

If the dog cannot be found, simply open the app and switch to the so-called live mode. After a few seconds of waiting, the tracker continuously sends the current position of the dog. Depending on the signal strength, the location becomes more and more accurate, which means that the circle in which the animal is located becomes smaller and smaller. Meanwhile, the tracker shows on a map where the dog is moving - and simulates its routes.

In the test, the signal was never as precise as with a vehicle, even after more than a minute, but it was always so good that the dog was actually visible a few meters from the position in the app. That security alone is worth its weight in gold when the alternative means not knowing where to look at all.

The app's augmented reality (AR) view is also quite accurate and helpful. In camera mode, Tractive shows in which direction the dog has run and how far away the animal has gone. This is particularly helpful if you don't know your way around the area at all.

If you are nearby, a Bluetooth signal will also help with the search. Sounds can also be triggered and a light switched on via Bluetooth. The light can certainly help in absolute darkness, but is far too weak for daylight or twilight. Here it would have been desirable to illuminate the entire tracker so that the dog really stands out.

The tones are quite high-pitched and quiet, and it wasn't entirely clear in the test who that's supposed to help. star dachshund Harry was visibly irritated and annoyed after switching it on, but people several meters away could no longer hear the sounds. Louder sounds would be a bad solution for the animal, a real solution to this problem seems complicated. Maybe just music instead of beeps?

However, there is not infinite time to find the animal. Because as soon as you activate the live mode, the tracker consumes significantly more battery than is usually the case. With a full tracker there are still a few hours before the battery gives up, but the 5-7 days that the tracker normally lasts in live mode are a long way off. Before long walks, it is therefore important to charge up!

Of course, all of this has its price. Tractive is neither cheap nor a one-time purchase. The tracker costs between 40 and 50 euros when ordered - regardless of the version, because the device is also available as a GPS transmitter for cats. At Amazon there are also versions with collars in a set - which is not such a bad deal as the collars are branded goods - but if in doubt you already have one.

After purchase, the GPS tracker is added to the ongoing monthly costs. Because without a subscription, the device does not work. In principle, there are two different models, each of which can be paid in three intervals. The "Basic" subscription includes location updates, live tracking and the fitness functions. The "Premium" model also offers family sharing, worldwide coverage, a position history of the last 365 days and the ability to export GPS data.

The "Basic" subscription can be taken out for one month, one year or two years, the costs are between 13 and 5 euros per month, depending on the interval. If you choose one or two years, the total amount is due in one fell swoop. The "Premium" subscription, which makes more sense in many cases due to its family option alone, can only be paid for in advance, with a choice of 12 months, 2 or 5 years. Calculated down to the month, Tractive costs 5 to 8 euros in this model. If you book the service for 5 years, the total costs are 300 euros - in most cases the costs for two years are less painful at first, especially since you are not committed to it for so long.

If you want, you can even take out insurance for the transmitter with "Tractive Care", which guarantees a new device free of charge in the event of loss, damage or theft. This costs between 1 and 2 euros per month additionally.

A bad phrase, no question. But in this case it applies. For a dog or cat owner, having a pet run away is one of the worst situations imaginable. And Rütter is right when he says that nobody is immune to it. As far as its core task is concerned, the Tractive GPS Dog 4 Tracker has proven to be an absolutely reliable, technically advanced and practical GPS transmitter, whose app leaves nothing to be desired.

The fitness functions are at best quite nice, the location, and thus the most important thing this device has to offer, is very well implemented and really helpful.

The Tractive transmitter could be thinner, lighter and less bulky - but that's something to overlook. The charging cable is really not optimal, the connection of which is proprietary and doesn't even stick particularly well. But don't worry: thanks to the EU, devices like the Tractive GPS Dog 4 Tracker will also have to switch to a uniform connection in a few years - and such negative points are a thing of the past. It would be nice if the manufacturer switched over as quickly as possible and didn't wait for pressure from Brussels.

All in all, you can't go wrong with the Tractive transmitter because it fully fulfills its core function. Even if you don't need the device, it's extremely reassuring to know that your dog is using it. Manufacturers such as Fressnapf or Weenect offer alternatives to the Tractive tracker – the costs are similar, whereby Fressnapf is particularly interesting because you do not have to take out a subscription for two years.

1 Stefan Mross and Anna-Carina Woitschack: "A moving... 2 Emergencies: father of soccer professional Brünker... 3 Justice: Fire department wants harsh penalties for... 4 Fix: Chelsea grab Storm Jewel Fofana 5 Report: Selke leaves Hertha and changes within the... 6 From Silbereisen to Winterscheidt: These were the... 7 Home office and Co.: More net from the gross: what... 8 Stefan Mross and Anna-Carina Woitschack: "A moving... 9 "Politico": In a pot with Trump, Kanye and... 10 Saffron: why the most expensive spice in the world... 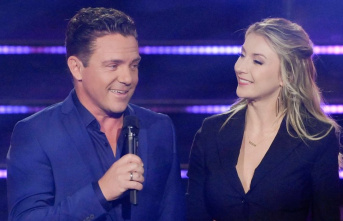