The eleven crew members of the Piedras fishing boat, based in Marín, have been rescued alive this Wednesday after the boat they were working on capsized due to a leak. 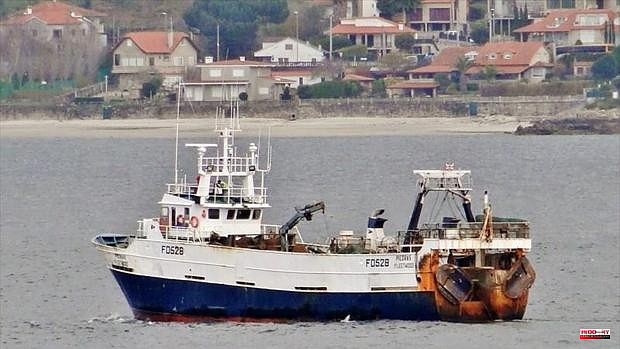 The eleven crew members of the Piedras fishing boat, based in Marín, have been rescued alive this Wednesday after the boat they were working on capsized due to a leak. Maritime Rescue sources have reported that the accident occurred 64 miles southwest of Cape Mizen, in Ireland, and that all the sailors "have been rescued in good condition" by the Armaven Uno fishing vessel.

The accident recalled the shipwreck of the Villa de Pitanxo on February 15, also from the port of Marín and in which 21 people lost their lives. Regarding this new scare that the sea has given the town, the spokeswoman for the Pitanxo families, María José De Pazo, showed her relief on learning that in this case there have been no victims to mourn.

«When they gave me the news that another ship had sunk, I had to sit down because everything that we are going through came to my mind and we did not wish it on anyone. We send a hug to the crew and the shipowners », she indicated to specify that she does not know the reasons for the shipwreck.

“The only thing I can say is that in this case the behavior of the skipper in abandoning the ship has been good, but I am not going to go into further evaluation” he noted to remember the demands of the families, who insist on going down to the Pitanxo to see the real causes of the shipwreck.

1 Germany will send IRIS-T air defense system to Ukraine... 2 Erdogan declares that Turkey will not continue bilateral... 3 Germany announces more arms shipments to Ukraine but... 4 Biden offers to supply Ukraine longer-range missiles 5 Pope urges lifting of Ukraine block to allow wheat... 6 Rwanda declares that it will not stand by if Congo... 7 Israel claims that a laser missile shield will cost... 8 S&P, Dow futures rise ahead of economic data;... 9 Yellen claims she was wrong about the inflation path.... 10 Explainer: Is it illegal to possess guns in Canada?...